You are here: Home1 / Wolf Info2 / Facts vs Fiction3 / Reliance on moose as prey led to rare coyote attack on human

Wildlife researchers have completed a study that may settle the question of why, in October 2009, a group of coyotes launched an unprovoked fatal attack on a young woman who was hiking in a Canadian park.

By analyzing coyote diets and their movement in Cape Breton Highlands National Park, where the attack occurred on a popular trail, the researchers concluded that the coyotes were forced to rely on moose instead of smaller mammals for the bulk of their diet – and as a result of adapting to that unusually large food source, perceived a lone hiker as potential prey. 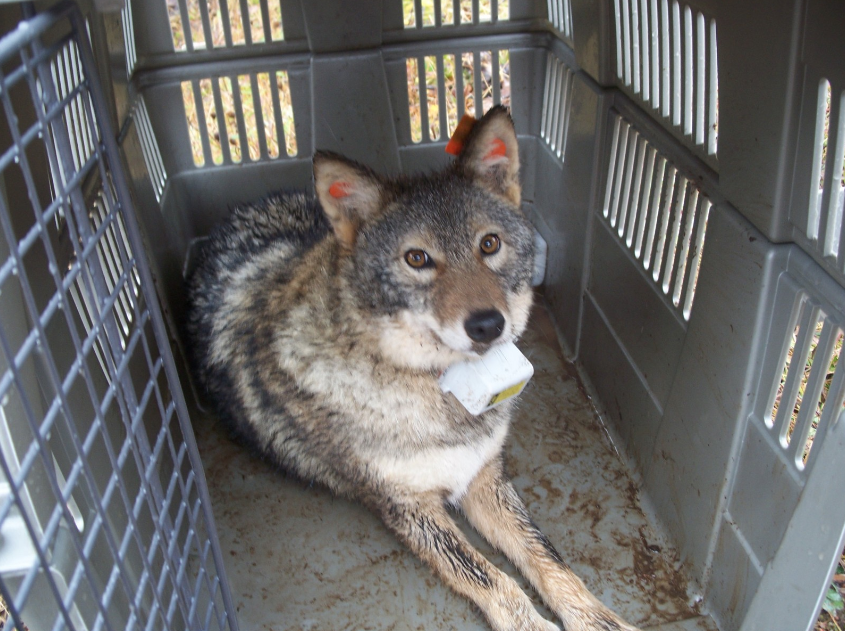 One of 24 coyotes captured in Cape Breton Highlands National Park that researchers fitted with a GPS collar to track its space use.  Photo: Stan Gehrt

The findings essentially ruled out the possibility that overexposure to people or attraction to human food could have been a factor in the attack – instead, heavy snowfall, high winds and extreme temperatures created conditions inhospitable to the small mammals that would normally make up most of their diet.

“The lines of evidence suggest that this was a resource-poor area with really extreme environments that forced these very adaptable animals to expand their behavior,” said lead author Stan Gehrt, a wildlife ecologist at The Ohio State University.

“We’re describing these animals expanding their niche to basically rely on moose. And we’re also taking a step forward and saying it’s not just scavenging that they were doing, but they were actually killing moose when they could. It’s hard for them to do that, but because they had very little if anything else to eat, that was their prey,” he said. “And that leads to conflicts with people that you wouldn’t normally see.”

The research is published in the Journal of Applied Ecology.

The death of 19-year-old folk singer Taylor Mitchell is the only fatality resulting from a coyote attack on a human adult ever documented in North America.

Gehrt, who leads the Urban Coyote Research Project that has monitored coyotes living in Chicago since 2000, was consulted by media for his expertise after the attack. In urban areas like Chicago, where thousands of coyotes live among millions of people, injuries from coyote-human encounters are very rare.

“We had been telling communities and cities that the relative risk that coyotes pose is pretty low, and even when you do have a conflict where a person is bitten, it’s pretty minor,” said Gehrt, a professor in Ohio State’s School of Environment and Natural Resources. “The fatality was tragic, and completely off the charts. I was shocked by it – just absolutely shocked.

“A lot of people began wondering if we were at the front edge of a new trend, and if coyotes were changing their behavior. And we didn’t have good answers.”

Gehrt expanded an initial investigation of the fatal attack – and a few dozen less severe human-coyote incidents in the park before and after Mitchell’s death – into a detailed field study. Between 2011 and 2013, he and colleagues captured 23 adult and juvenile coyotes living in the Cape Breton park and fitted them with devices to document their movement and use of space. 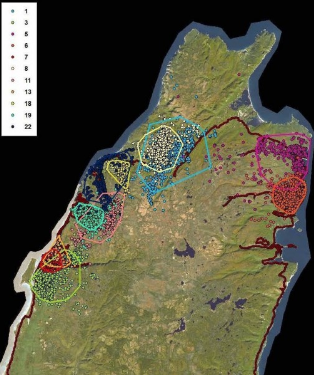 Analysis of individual coyotes’ space use in the park showed their home ranges were relatively large. Image: Stan Gehrt

To obtain dietary information, the team also snipped whiskers from the live-captured coyotes and from the bodies of coyotes implicated in the fatal attack and in other human-coyote incidents. For comparison, the researchers collected fur from potential prey – southern red-backed voles, shrews, snowshoe hare, white-tailed deer and moose – and hair from local barbershops that served as a proxy for human food.

Seth Newsome, professor of biology at the University of New Mexico and corresponding author of the study, analyzed stable isotopes of carbon and nitrogen in these whisker and hair samples to determine what the coyotes had been eating in the months before they were captured or lethally removed from the population.

To obtain dietary information, the team also snipped whiskers from the live-captured coyotes and from the bodies of coyotes implicated in the fatal attack and in other human-coyote incidents. For comparison, the researchers collected fur from potential prey – southern red-backed voles, shrews, snowshoe hare, white-tailed deer and moose – and hair from local barbershops that served as a proxy for human food.

Seth Newsome, professor of biology at the University of New Mexico and corresponding author of the study, analyzed stable isotopes of carbon and nitrogen in these whisker and hair samples to determine what the coyotes had been eating in the months before they were captured or lethally removed from the population.

The analysis showed that, on average, moose constituted between half and two-thirds of the animals’ diets, followed by snowshoe hare, small mammals and deer.

“This dietary evidence was the critical piece to it,” Gehrt said. “Their diets changed because they’re taking advantage of whatever different food items are available at the time. We’re used to seeing big oscillations across the segments of whiskers depending on the season. But in this system, for these coyotes, we don’t see that – they flat line at the moose end, so there’s very little variation in their diet.”

Samples from the coyotes that were confirmed to have been involved in the fatal attack showed they had been eating only moose, “and their diet wasn’t changing,” he said. An analysis of coyote droppings confirmed the isotope findings. The researchers found only a few examples of individual animals having eaten human food.

Beyond the dietary analysis, Gehrt and colleagues did test for the possibility that coyotes were familiar with humans, and therefore not fearful around people. The movement patterns showed that while the coyotes’ space use was extensive – likely related to the need to search far and wide for prey – the animals largely avoided areas of the park frequented by people and were more active at night during periods when daytime human use was at its highest. Prohibition on hunting and trapping in the park also removed a human threat.

“It’s a big area for these coyotes to live in and never have a negative experience with a human – if they have any experience at all,” Gehrt said. “That also leads to the logical assumption that we’re making, which is that it’s not hard for these animals to test to see whether or not people are a potential prey item.”

In cities and most other wilderness areas where coyotes live, food of all types is plentiful – suggesting only areas low on natural prey, like islands and remote northern climates, would pose a similar risk for coyote-human interactions, Gehrt said. Their survival in Cape Breton, he said, is attributable to their remarkable ability to adjust to their environment.

“These coyotes are doing what coyotes do, which is, when their first or second choice of prey isn’t available, they’re going to explore and experiment, and change their search range,” he said. “They’re adaptable, and that is the key to their success.”

This work was supported by Parks Canada, the Nova Scotia Department of Lands and Forestry, and the Max McGraw Wildlife Foundation.

Emily Caldwell is a writer for Ohio State News at The Ohio State University in Columbus, Ohio.