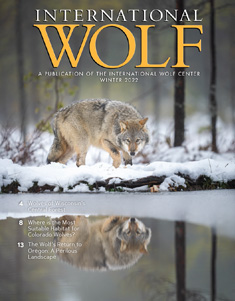 Wisconsin’s CFR has been called “an island in a countryside of farms”—and wolves have recolonized its 3,234 square miles almost to saturation. The author here describes how they settled in there and rebounded after recent Wisconsin wolf hunts so they’re still hunting and howling in the CFR.

Where is the Most Suitable Habitat for Colorado Wolves?
By Mark Ditmer, Kevin Crooks, Stewart Breck and George Wittemyer

In 2020, 50.9% of Colorado voters decided to require reintroduction of gray wolves there. Before that could happen, Colorado State University biologists set about to locate habitat suitable for wolves that carried the lowest risk of conflict with humans. This is the story of their success. Download article.

Wolves in Oregon: A Perilous Landscape
By Debra Mitts-Smith

As settlers brought livestock to the Pacific Northwest, extermination of wolves grew common—and strychnine was settlers’ favorite weapon. By the mid-20th century, wolves had been extirpated from the lower 48, except for the upper Midwest. But as human attitudes change, so does the fate of Oregon wolves.

The Center’s Wolf Symposium, held every four years in Minneapolis, attracted nearly 450 biologists, researchers and enthusiasts from across the world. Attendees were treated to fascinating presentations, a banquet, a dance, a bus tour and a new film about Yellowstone. These are the highlights, with photos, for you to enjoy.

Hope Amidst Change
by Grant Spickelmier

As I write this letter, we have just wrapped up the final session of the 2022 International Wolf Symposium. This October, more than 450 wolf managers, scientists and enthusiasts gathered in Minneapolis to hear the latest biological discoveries about wolves, learn about wolf recovery efforts around the globe, and exchange ideas and information about the future of human-wolf coexistence. It was an intense, exhausting and fabulous four days!

With the addition of the next generation of Exhibit Pack members, Caz and Blackstone, the summer of 2022 was an active time for the wolf-care team and ambassador wolves. As discussed in the previous “Tracking the Pack” feature, we predicted that the pups would be quite large for a typical early August introduction.

Our prediction was correct. Due to the pups’ weights and their calm behavior toward humans, our socialization goals were met, and we selected July 28 for the introduction day. Blackstone weighed 49 pounds and Caz weighed 45 pounds on the day of introduction. (Boltz still holds the record as the largest pup introduced to adult wolves for his July 31, 2012, introduction weight of 51 pounds.)

Since its founding in 1985 by Dr. L. David Mech and others, the International Wolf Center has sought to provide the latest scientific information about wolves to our visitors, members, program participants and the public. We believe that continued investment in scientific discovery about wolves and other wildlife will lead to increased understanding of how to build a future where wolves and humans can coexist and thrive. We also understand that many challenges exist for students and early-career researchers. To help this next generation of wildlife biologists, the Center launched a pair of fellowships named after Dr. Mech. The first fellowship winners in 2022 were Lily Heinzel and Cameron Ho. They’ve each provided updates on their important work and how the L. David Mech Fellowships have made their work possible.

Research: Wolves Can Engender a “Landscape of Fear.” Meanwhile, they help control damage from invasive species
by Tracy O’connell

An exhaustive study, published in June in Nature, sought to clarify conflicting data on the origins of dog domestication. Analysis of 72 ancient wolf genomes spanning 100,000 years seems to indicate that two different wolf lineages, one in Asia and the other in Africa or the Middle East, might be involved. Just how this played out— where and how those lineages met— remains unclear.

“Landscapes of stress and fear” affect farmers as well as prey

A paper in the journal Frontiers of Ecology and Evolution looks at the impact of living among wild carnivores on farmers in Sweden and Norway and builds on the idea that wolves create what has been called “landscapes of fear” for prey.

A study from the University of Victoria in British Columbia, Canada, looked at the changes in wolf behavior from aerial culling. Reported in nationalpost. com and relying on time-stamped photo images over a number of years, it was found that—apparently in response to culling that happened during the day—wolves began to hunt nocturnally. This behavior did not extend to other species in the area, which maintained their normal routines.

Research led by Bernhard Clemm von Hohenberg, a computational social scientist at the University of Amsterdam, found evidence that “the reemergence of the wolf has been accompanied by electoral gains for far-right parties” and that “far-right politicians frame the wolf as a threat to economic livelihoods.” Published in the Proceedings of the National Academy of Sciences, it focused on the German far-right party Alternative für Deutschland (AfD).

Rewilding, a concept that in some places supports the return of apex predators to their original range (among other measures) got a nod in a study by Queens University in the U.K. and Cornell University in New York. The study claims to have scientifically justified the return of wolves, bears and lynxes to parts of Europe to control invasive species.

Wolves to the rescue in Rome?

In other quarters, wolves already present are seen as a solution to invading species. BusinessInsider.com reported in June that in Rome, wild boar weighing up to 200 pounds root through trash and have been known to scare locals going about their business. If that is not off-putting enough, there is fear that the animals carry African swine fever, which could affect Italy’s prosciutto ham industry.

One Wet Wolf — and One Memorable Moment

In planning a fall hike one late October with my wife Ann and several friends, I had no idea that our plan would bring one of my most memorable wildlife experiences. We decided to head to Vermilion Gorge in northern Minnesota, where the Vermilion River ends its journey of 38 miles from Lake Vermilion by emptying into Crane Lake near the small town that bears its name.

Wolves Across Borders
International Conference on Wolf Ecology and Management
Stockholm, Sweden, May 8-11, 2023
By Aimee Tallian and Camilla Wikenros

Wolves have been at the center of human-wildlife conflict in northern realms since written records began. No matter where they are in the world, their conservation, recovery, reintroduction and general management are politically polarized, contentious and fraught with complication. Issues surrounding wolves are exacerbated by their far-reaching range and their indifference to state and national boundaries. On a global scale, wolves pad across the borders of a diverse collection of countries that represent a broad spectrum of cultures, environments, economies and governmental structures. This is especially true in Eurasia, where the wolf’s range stretches across more than 50 nations. Variation in cultural values, political objectives, monitoring strategies and knowledge base about local wolf populations makes cross-border management complex.