You are here: Home1 / Wolf Info2 / Wolf News3 / Original articles4 / Learn about what wildlife research was like before the days of GPS col...

In this story, our founder, Dr. L. David Mech, talks about what wildlife biology was like long ago when researchers used ear tags instead of GPS collars to track wolves.

The tightened herd of massive bison plowed through the cloy-ing snow of the Pelican Valley in Yellowstone National Park barely ahead of the lead wolves in an eight-member pack. A thousand miles away, in total comfort, biologist Dan MacNulty watched intently; he moved his computer mouse, and the drama drew closer. However, this was no video MacNulty and his colleagues were watching at the University of Minnesota in St. Paul, but a real-life adventure going on in real time in Yellowstone. The latest webcam/inter-net technology had made it possible. 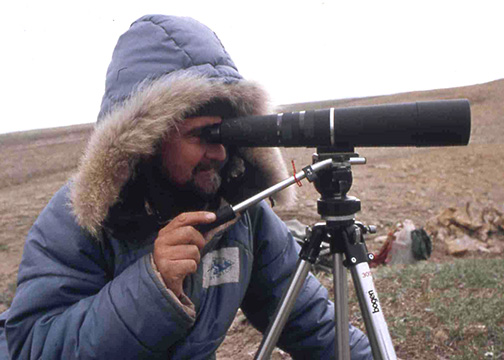 Meanwhile, in the Yellowstone Park offices, Dr. Doug Smith was downloading electronic signals that appeared as dots on a map of the park. Each dot coded the recent location of a wolf with a special high-tech collar, the utility of which relied on two sets of satellites high above the earth. The collar listened to signals from the global-positioning system satellite set, calculated the wolf’s location to within a few yards, and soon after sent that coded position to the Argos satellites along with the precise date, time and other data to another station that forwarded it to Smith’s computer.

Both Smith’s and MacNulty’s systems had just become feasible during the previous two years. Tracking wolves wasn’t always that easy, and still today, these sophisticated systems are available only to a lucky few. Nevertheless, most wild-life biologists studying animal movements are using some type of Global Positioning System (GPS) collar. Others are monitoring webcams at various types of nests, dens or feeding areas. Few of these folks are old enough to ever have relied on the lower-tech, numbered ear tag used to scour the wilds for tiny bits and pieces of information about animal movements.

For many decades in the good old days, biologists trapped mammals, birds, fish, reptiles and amphibians, marked them with numbered tags and hoped that someday they or someone else would come across the creature elsewhere and faithfully report its location. Then the biologist would have his or her (back then, usually his) little gem of information indicating how far the tagged animal had traveled between two points. Sometimes the second location was revealed when the animals were taken by hunting, fishing or trapping; some-times they were killed on the road; and sometimes the animals were recaptured by the scientists who tagged them.

Getting the tag on the creature was not always an easy task. I cut my biologist’s teeth as a Cornell University under-graduate, trying to manage this process with black bears some six decades ago. At that time the anesthetic drugs were far more primitive than they are today. For many years now, the public has witnessed TV heroes casually darting some dangerous creature and causing it to drop in its tracks. Even today this is not an accurate depiction of what actually happens—but during my undergraduate days, even a reasonable facsimile was impossible. The only anesthetic drug available then for injecting into an animal could never have been delivered by a dart from a distance. No—we had to tie the bear up and hand-deliver the drug into its abdomen. 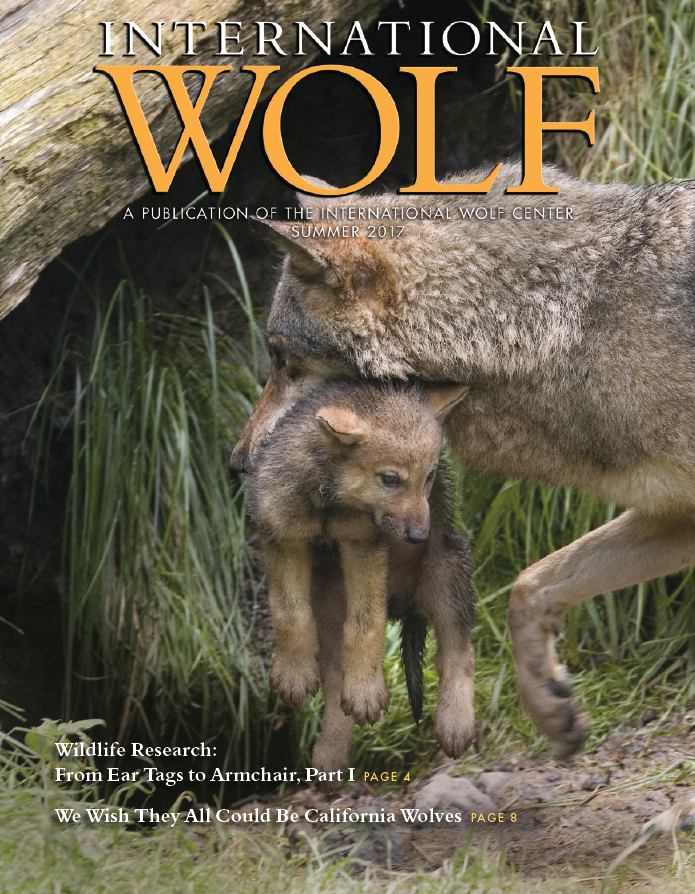 How do you tie up a bear? I have to admit it wasn’t easy, but for our team of eager, testosterone-driven undergraduates the technique offered some fine sport. We would catch these bears in the Adirondack Mountains of New York State in steel foot-traps much smaller than real bear traps. These special traps would not hold the biggest bears, much to our relief, but only those weighing about 200– 250 pounds. The only reason they even held these bears was because we did not fasten the traps solidly to something like a tree or large rock. Instead we attached the trap to a long, strong chain with a metal drag hook on the end. When the bear was caught, the creature would try to amble off, dragging the trap, chain and hook with it. Gradually the hook would repeatedly catch in some type of vegetation, and the bear would pull and thrash until the hook came loose. Eventually, however, the bear would tire and remain snagged in one spot.

Meanwhile, we would come along each day to check the traps, and find-ing one missing, would follow the drag marks from the hook in the soil and vegetation until we found the bear. That’s when the fun began. We always worked in pairs or occasionally with a third member. Each of us would approach the bear from a different direction, one with a stout rope in his hand and the other with a special chain noose. This noose was draped from the end of a ¾-inch pipe some six feet long with a T-shaped handle. The trick was to place the “choker’s” noose over the bear’s head and neck while the bear, with one foot attached to the trap and the other bat-ting the air, tried to avoid it. Most of the time we prevailed and managed to cinch the noose around the bear’s neck. Slowly we would then twist the noose until it was snug, thus giving us some measure of control of the bear’s head. Now, with the bear’s foot stuck in the trap and the noose pole holding the head, the bear’s maneuverability was reduced.

That’s when the other worker made his move. With a slipknot loop of rope around his wrist, the second person would approach the bear from behind—always allowing the bear to know where he was so he wouldn’t surprise it and cause it to move violently. Then the guy with the rope would grab one of the bear’s hind feet, pull the noose over his wrist and hand and over onto the bear’s ankle. Looping the other end of the rope around a tree and pulling it, the second person could then stretch that bear’s leg out, further restricting the animal’s movement. The other hind leg was easier, leaving only the one free, front leg still batting about. Some fancy lassoing of that foot allowed us to spread-eagle the bear. Then it was just a matter of injecting several CCs of sodium pentobarbital into the bear’s body cavity through the abdominal wall. The drug had to flow in among the intestines—not into them—so we pulled the abdominal wall up before injecting and also pulled up the plunger of the syringe to make sure we did not suck up any intestinal fluids, indicating that the tip of the needle was inside the gut. This laborious technique worked very well—but it was more difficult by lantern in the pitch dark, which was often when we had to do it. We checked long trap lines every day and often finished at midnight.

Once, when a snafu left me alone to check the last traps, I tried to handle a mid-sized bear by myself. That didn’t work very well, and I was quickly reminded of the folly of it all. Another time a special trap managed to hold a 400-pound, determinedly uncooperative bear. When a student technician finally maneuvered the choker noose around the animal’s neck, the bear suddenly stood up on its hind legs, pulling the worker toward him, and batted the choker handle, bending the ¾-inch pipe into a U-shape. Luckily the worker dropped the choker at that point and beat a hasty retreat. Only when a spare choker arrived did the crew subdue the bear.

Even when the process went smoothly, it wasn’t quite like darting the animals and watching them suddenly, peacefully fall asleep.