How Wolves Use Their Sense of Hearing to Engage the World

You are here: Home1 / Wolf Info2 / Wolf News3 / Original articles4 / How Wolves Use Their Sense of Hearing to Engage the World

This article was written by Sid Farrar, a volunteer with the International Wolf Center.

I always know when a dog is being walked on the sidewalk in front of my house as my own dog simultaneously raises his head, perks up his ears, sniffs the air, and quickly jumps onto the chair by the window to find his territorial interloper. Wolves, like their dog relatives, use their sense of hearing, often coordinated with smell and sight and sometimes touch to monitor their environment for what both friend and foe are up to.

They can use their triangular shaped ears that rotate independently to hear sounds from 6 to 10 miles away depending on the terrain and wind, which demonstrates why their sense of hearing is considered their most acute sense after smell. They can hear sounds up to a frequency of 25khz, with a maximum of up to 80 khz according to some researchers—much greater than a human’s upper limit of 20 khz and possibly even a dog’s at 47 to 65 khz.[1] And yet, they start out completely deaf and blind for their first 12 to 14 days of life, using their moans, whines, squeals, and screams to let the mother wolf know when they’re in distress and communicate other states, e.g., pleasure, frustration, that their developing brain can register.

This development proceeds quickly, so that by the time pups are 4 to 5 weeks old, they are vocalizing much like an adult wolf. They in turn adjust behavior in response to hearing their mother wolf’s barks, growls, woofs, etc., in close coordination with observing her postures and facial expression; feeling her bumps, nudges, nips; and smelling her hormonal secretions. 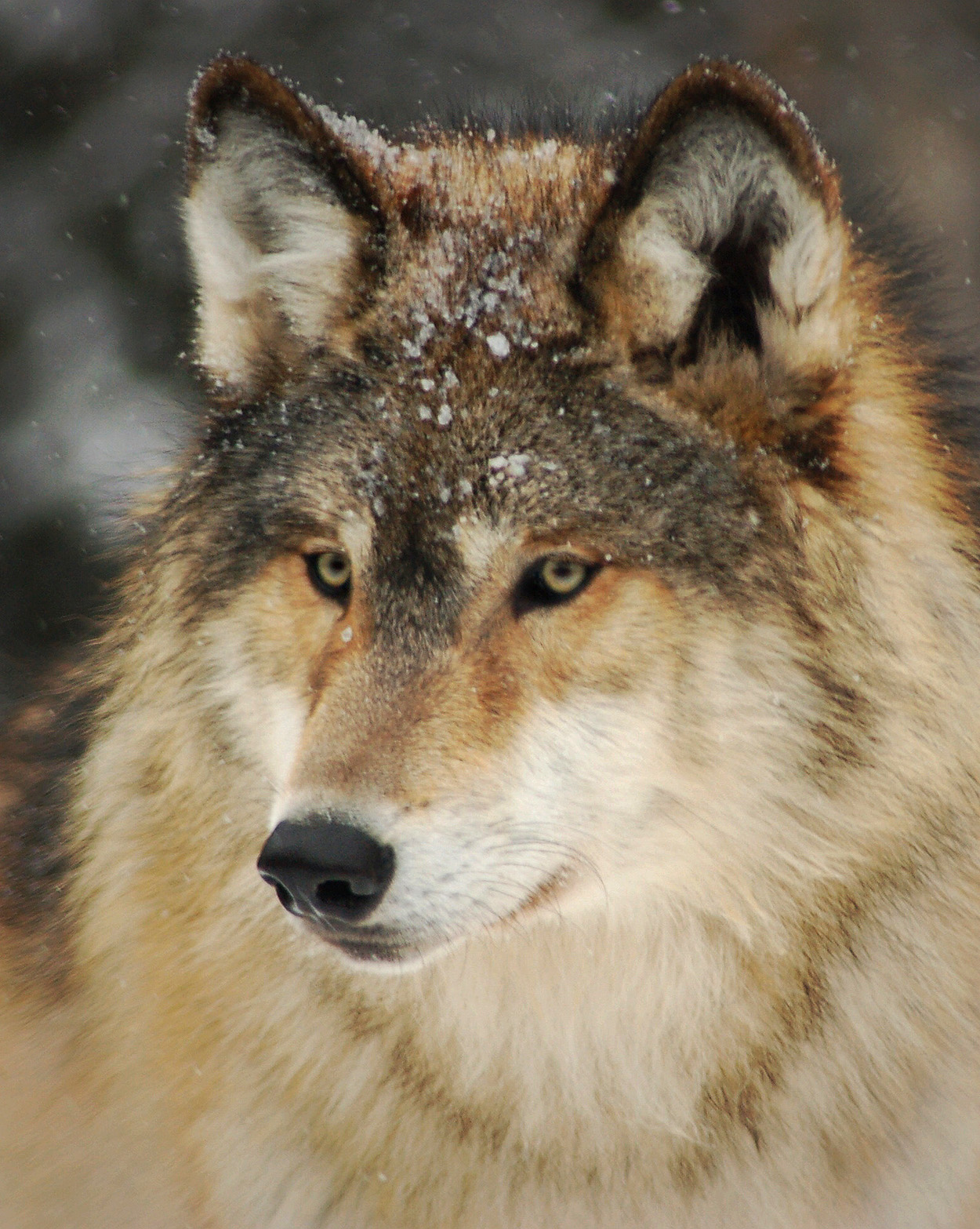 Denali, an ambassador wolf at the International Wolf Center in Ely, Minnesota, is pictured here with his ears pricked.

Simultaneously, their hearing and interpretive abilities evolve to allow them to respond appropriately to these same vocalizations coming from other wolves, reaching the  time where, in combination with their sense of smell, sight, and touch, they can recognize their mother through her vocalizations as well as other key pack mates.  Fred Harrington and Cheryl Asa in the book Wolves: Behavior, Ecology, and Conservation, identify five groupings of sounds that adult wolves use to communicate with each other and to signal their various experiences and states to the world[2]:

Harmonic sounds, including the whimper, whine, and yelp

Intermediate sounds, a variable class of harmonic to noisy moans

When two wolves tussle with each other, the dominant one might hear the submissive wolf’s whines, whimpers, and yelps as giving in and telling it to back off, as its snarls and barks, along with its commanding stance and facial nips, seem to have effectively conveyed its dominance. A young pup upon hearing an adult’s woof or bark might make a whine-moan as it takes heed that an intruder may be near and that it needs to seek shelter. Adult wolves discern the messages of the various combinations of each other’s whimper-yelps, woof-barks, bark-growls, and bark-growl-snarls to monitor and establish relations, determine behavior and spacing within the pack and with individual wolf visitors, as well as to establish territorial boundaries with other packs.

It is wolves’ acute hearing at a distance that allows them to pick up the snorts, bellows, hoof beats, and rustling of vegetation, combined with scents and ground vibration to identify the location and even the type of potential prey. But the sophistication of their hearing is best on display in their ability to interpret the fine-tuned messages that are conveyed with the various kinds of howls from other wolves. Lois Crisler tells us that, “There are many howls—the happy social howl, the mourning howl, the wild deep hunting howl, the call howl.”[3]  A pack may be able to determine the whereabouts of a stray wolf by its distant howl. Another’s howl may be announcing alarm at the presence of an intruder.  A female wolf during mating season is likely to hear a lone male wolf’s howl as an invitation to mate. .

Groups of wolves can participate in chorus howling that can be either harmonious with little modulation of individual howls, often for social bonding, or discordant, with more random, non-overlapping harmonics, which can be heard by visiting wolves as a warning to stay away. A group howl might sound to humans something like Carl Safina graphically describes in his book, Beyond Words:

Their voices surprise me, higher than the deep, chesty bawls I’d expected. And unexpectedly varies: some yowling and others yipping, some wavering their tones, others singing long, spare notes that they hold and let taper, the singing so different among the vocalists. And the impression—when I close my eyes—is of many more voices than there are wolves.[4]

What other wolves at a distance might hear is hard to say, but if they aren’t members of the pack, the discord may be heard as establishing territorial boundaries and a warning to keep their distance.

Wolves raised in captivity can develop abilities similar to dogs for recognizing and responding to voice commands and other verbal communication by rhythm and tone of voice, including their own name, as well as hand signals. However, they’re more likely to respond to the voice of the person who trained them than to  the other humans in their environment, and then, unlike with hand signals, they may be responsive to voice commands only for a limited time.

What wolves hear most naturally and effectively are the wolves, other mammals, birds, and insects in the wild where they belong, and we serve them best by leaving them there when we can and expanding their habitats so that their aural world is as rich and varied as possible.

Busch, Robert H., 1995, 2018. The Wolf Almanac: A Celebration of Wolves and Their World, Lanham: Rowman & Littlefield

Sid Farrar is retired from his 30+-year career as executive editor and director for several leading Minneapolis-area publishers and devotes his time to freelance writing and editing for environmental and animal rights organizations, most recently as volunteer for MN350 and MN350Action in their mission to address the climate crisis.