Apparent competition: What is it? Learn more about predator-prey relations in multi-prey ecosystems

You are here: Home1 / Wolf Info2 / Wolf News3 / Original articles4 / Apparent competition: What is it? Learn more about predator-prey relations...

What is apparent competition? The concept deals with predator-prey relations in multi-prey ecosystems. For example: How do wolves impact a white-tailed deer population when there are also moose on the landscape? And how does this impact change when the elk population goes up or down? That concept is analyzed in this article.

For more than a decade concern has grown about a decline in the number of moose in northeastern Minnesota and woodland caribou in certain parts of British Columbia. Many fear that both these iconic ungulates are on the road to extinction in those areas. Not surprisingly, the predator that shares these habitats—the wolf—has been implicated as a cause behind both declining populations. 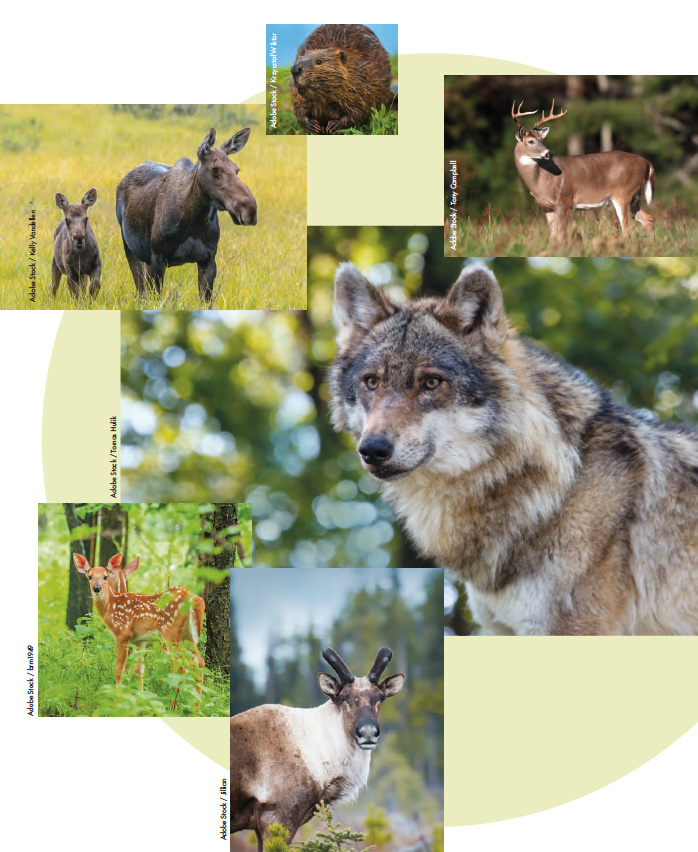 But ecosystems are complex, and many factors can affect predator-prey numbers, including weather, climate change, poor nutrition, disease, ticks, habitat loss and human hunting. Two recent studies highlight yet another factor that may be contributing to the decline of moose in northeastern Minnesota and caribou in the rain forests of British Columbia.

These two regions are multi-prey ecosystems, meaning that there are multiple prey species available for wolves to hunt and consume. Shannon Barber-Meyer and Dr. L. David Mech explain this in their paper, “White-tailed Deer (Odocoileus virginianus) subsidize Gray Wolves (Canis lupus) During a Moose (Alces americanus) Decline: A Case of Apparent Competition?” In multi-prey systems, when one prey species declines, the predator population can also go into decline (as in a single-prey system) or it can expand its diet by hunting and feed-ing on an alternate prey species. In this case, the predator’s numbers continue to increase because its diet is supplemented by the alternate prey species; at the same time, the predator also continues to feed on the primary prey species, thus reducing it. Wildlife biologists call this phenomenon “apparent competition.” Barber-Meyer and Mech describe this as occurring “when two prey species negatively interact through the sharing of a common predator.” 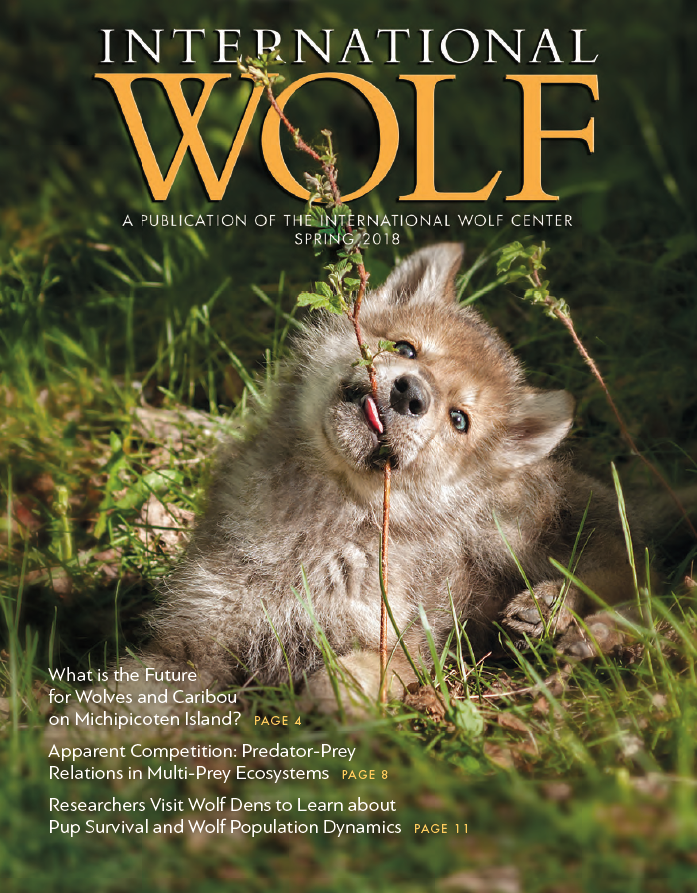 Barber-Meyer’s and Mech’s study focused on the predator-prey dynamics of a multi-prey system located in the east-central Superior National Forest in northeastern Minnesota. The wolves there have three prey species available: moose, white-tailed deer, and beavers, with deer being most abundant. From 2006 to 2016, the moose population in this region decreased by 55 percent, from approximately 8,900 to 4,000. The investigators sought to determine whether wolf numbers also fell, or whether wolves supplemented their diets by eating more of an alternate prey source, in this case, deer. The biologists compared wolf numbers and diet by analyzing wolf scats before and after the moose decline. To estimate wolf numbers, they tracked and counted radio-collared wolves in the scat study area.

Their study revealed that as the moose population declined by more than half, the wolf population almost doubled during the same period (from 23 during 2001-2002 to at least 42 in 2010-2011 and a minimum of 37 in 2012-2013). The wolves’ most common prey were deer (fawns and adults), followed by moose calves and beavers. Barber-Meyer and Mech suspect that wolf numbers did not initially decline along with the dip in moose numbers because of the abundance of white-tailed deer in the study area, suggesting that apparent competition may be at least partly responsible for the continued moose decline. Wolves began eating more deer, and deer sup-ported the higher wolf population.

At the same time, the increased number of wolves did not stop preying on moose calves, which in turn contributed to the continued drop in moose numbers. Wolf numbers, however, did not decline for several years. The results of the Barber-Meyers and Mech study suggest that the wolf-moose-deer relationship may be an example of apparent competition.

Finally, it should be noted that following the conclusion of this scat study, Barber-Meyer and Mech found that wolf numbers also began to decline. This suggests that the white-tailed deer population, which at first supplemented the wolf’s diet, began to decline because of the increased wolf predation on it. The drop in deer numbers as well as the decreased moose population eventually began to limit wolf numbers.

A second study, “Experimental Moose Reduction Lowers Wolf Density and Stops Decline of Endangered Caribou,” led by biologist Robert Serrouya investigated the role of apparent competition in the decline and recovery of woodland caribou in British Columbia. Extensive logging opened up forage in the Columbia and Cariboo mountain ranges, triggering an influx of moose into a region once dominated by caribou. Moose are considered an invasive species there; they are also the primary prey of wolves, the main predator in the area. An increase in moose meant more food for wolves. So even though caribou declined, the influx of moose helped sustain the wolf population. Wolves began to consume moose while continuing to feed on, and thus limit, the caribou population. The moose-caribou-wolf relationship suggests a case of apparent competition.

Serrouya and his co-authors identified three possible ways to help the caribou recover:

1. Reduce or eliminate logging in the caribou range, which would in turn reduce the food supply for the invasive moose. To reverse the adverse effects of deforestation, however, takes time, which the caribou in this region do not have.

2. Reduce the number of wolves, which has been useful in other regions where caribou herds are at risk of extirpation. However, for this to be successful, it needs to be an ongoing process because wolf numbers can quickly recover. Further, the removal of wolves has become controversial.

3. The option taken by the Canadian government: manage the moose population. Underlying this option is the concept of apparent competition “which can occur when a novel prey species colonizes a new area, stimulating an increase in the abundance of more predator species.” By removing the moose, one could indirectly reduce the number of wolves. Serrouya and his team used this approach to test whether reducing the moose population to earlier levels would lead to fewer one or wolves, thereby helping caribou recover.

The team established a “treatment” area and a “reference” area in the Columbia and Cariboo mountain ranges. In the treatment area, they increased human hunting to reduce the moose population. Three caribou herds inhabit that area. The reference area had two caribou herds and no moose reduction. Moose reduction was initiated in 2003, but to understand population trends and dynamics of these three species, the study’s authors collected, evaluated and compared data on caribou, moose and wolf numbers before and after the moose reduction began, from 1992 to 2014.

The study revealed that the moose population in the treatment area fell by 70 percent, while there was no decline of moose in the reference area. Wolves in the treatment area also declined due mainly to dispersal, but also to starvation and a low pup-survival rate. The caribou herds continued to decline in the reference area while the largest herd in the treatment area has remained stable for 14 years. Still, the authors point out, the stabilization of a caribou herd, although encouraging, does not signal recovery. Instead, they warn that although limit-ing or reducing the number of moose helped stop the caribou decline, growth and recovery of the caribou most likely will require both habitat protection and a direct reduction of wolves by hunt-ing, trapping or other control measures.

So are wolves responsible for the decline and possible extinction of the moose in northeastern Minnesota and the caribou in British Columbia? On the surface, these two studies suggest that wolf populations, instead of decreasing as the moose and caribou decrease, are instead increasing and continuing to hunt and consume both moose and caribou. But they also suggest that the underlying cause of the increase in the wolf populations is not increased appetite or ravenous behavior on the part of wolves. Instead, it is the presence of an alternate prey species that helps keep wolves fed and their numbers high. In addition, the mere vulnerability of any of these prey animals to wolves is usually related to other factors including weather, diseases and parasites.

These studies reveal the complexity of ecosystems where a range of variables are at play, including weather and climate change; disease; the kinds, numbers, and sizes of predator and prey species; human disturbance and destruction of habitat; and hunting and nutrition. The interconnectedness and mutability of these factors underscore the difficulty in trying to understand, disentangle, and reduce or eliminate them to save a species from extinction.

The simple answer is not always so simple.

Debra Mitts-Smith is a School of Information Sciences faculty member at the University of Illinois. Her research and teaching focus on visual culture, children’s literature, history of the book, and storytelling. Her book, Picturing the Wolf in Children’s Literature, was published by Routledge in 2010.