Lone Wolf ‘Atop the Roof of the World’

You are here: Home1 / Wolf Info2 / Wolf News3 / Original articles4 / Lone Wolf ‘Atop the Roof of the World’

Lone Wolf ‘Atop the Roof of the World’ 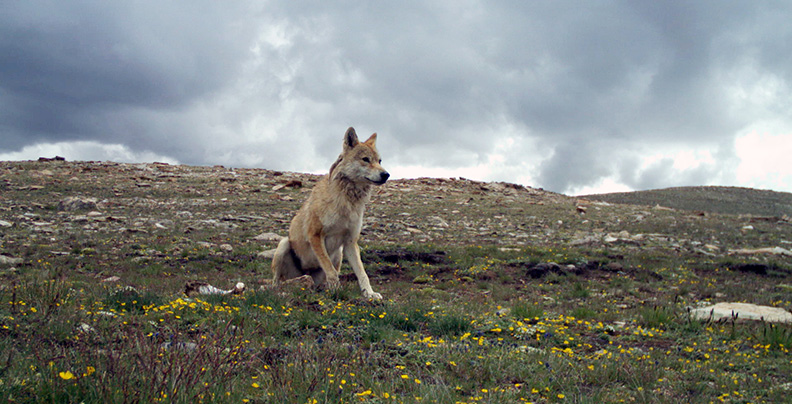 Halfway around the globe from North America, in an expanse so different it might be a moonscape, lies a no-man’s land, its fierce winds sand-blasting everything in their path.

“The Roof of the World” encompasses the interior of Asia, including the Himalayas, the Pamirs, and the Tibet, Tian Shan and Altai Mountains. For all its remoteness, however, High Asia faces the same challenges as the rest of the planet: climate change, water shortages, desertification, and the rapid disappearance of habitats and species.

But life is not entirely grim in this forbidding region. Its people may derive health benefits from such high-altitude locales, including a lower risk of chronic diseases such as hypertension and diabetes-associated anemia related to how their bodies have adapted to low oxygen levels.

If that’s true for Homo sapiens, what about other species sharing this distant place?

The Himalayan wolf is a top carnivore on The Roof of the World, which holds some of the last intact wilderness areas on our planet.

“The protection of Himalayan wolves is critical to preserving this ecosystem,” Werhahn says. That becomes even more relevant, she believes, “given that these mountains contain the water resources for billions of people. It’s of global interest to keep this habitat and its wildlife populations healthy.”

In the ancient tradition of 12th century warlord Genghis Khan, Werhahn and her fellow researchers ascended narrow, steep paths and walked hundreds of kilometers to conduct their studies.

The team mounted expeditions to the Nepalese Himalayas, western China, Kyrgyzstan and Tajikistan. The outcome was worth the rigors, Werhahn says. The Himalayan wolf, the scientists found, is genetically adapted to thrive in harsh conditions at high altitudes where the air is very thin indeed.

The researchers conducted field work in spring and summer at three sites across the Himalayas: the Humla and Dolpa districts in the northwestern Nepalese Himalayas, and the Kanchenjunga Conservation Area (KCA) in the northeastern Nepalese Himalayas. Humla and Dolpa are in arid zones with alpine grasslands and alpine steppe habitats. KCA lies in the inner valleys of the eastern Himalayas, with subalpine forests in lower regions and alpine grasslands in upper areas.

The biologists searched for Himalayan wolf samples in the form of scats and hair over a total of 1,770 kilometers (nearly 1,100 miles), they reported in 2018 in the journal Global Ecology and Conservation. They walked 605 kilometers (376 miles) in Humla, 810 kilometers (503 miles) in Dolpa and 355 kilometers (220 miles) in KCA.

They found that Himalayan wolves prefer wild prey over domestic prey, and smaller ungulates such as Tibetan gazelles over larger ones like white-lipped deer. Small mammals such as the Himalayan marmot, woolly hare and pika are important supplements to the wolves’ main meals, Werhahn and co-authors stated in a 2019 paper in Global Ecology and Conservation.

“We found that livestock was avoided when wild prey was available,” said the researchers. “The protection of Himalayan wolves and other sympatric carnivores can be enhanced by securing healthy, wild prey populations through setting aside wildlife habitat refuges and by more sustainable livestock herding, including improved herding practices.”

Werhahn’s research focused on the Himalayan wolf, but she and colleagues also obtained scats from red fox, Tibetan fox, snow leopard and Eurasian lynx. For genetic reference, they collected samples from the region’s dominant breed of domestic dog, the Tibetan mastiff. This mastiff ‘s ability to avoid hypoxia in high altitudes is a result of higher hemoglobin levels compared to dogs at low altitudes, state biologists at the Chinese Academy of Sciences and other institutions in the journal Molecular Biology and Evolution. Prehistoric interbreeding with Tibetan wolves led to the adaptation, these scientists believe.

During Werhahn’s far-flung travels, she and her colleagues collected a total of 287 samples—104 in Humla, 139 in Dolpa and 44 in KCA.

Their expeditions provide evidence for the genetic distinctiveness of the Himalayan wolf.

“The Himalayan wolf differs from the Holarctic [northern continental] gray wolf in a set of functional genes suspected to be related to the hypoxia pathway,” the biologists state. “These genes are seemingly involved in adaptation to life at high altitudes where less atmospheric oxygen is available.”

The results confirm the hypothesis that the Himalayan wolf is an evolutionarily distinct wolf lineage. The distribution and population size of this unusual Asian wolf compared to its relative, the more widely distributed gray wolf found at lower altitudes, are a major focus of Werhahn’s study.

Research on “The Roof of the World”

Very little is known about the Himalayan wolf “because science and conservation have overlooked this high-altitude wolf as just another gray wolf,” Werhahn says. “Almost no research has been conducted and no conservation action has been in place, risking a ‘silent’ population decline.”

Results she and co-authors published in 2020 in the Journal of Biogeography reveal the Himalayan wolf’s evolutionary uniqueness, including adaptations for coping with a high-altitude environment that haven’t been found in any other wolf.

Of the carnivores on the Qinghai Tibetan Plateau of China, brown bears are the ones humans fear most, Werhahn reveals. “The bears break into homes in search of food, at times frequently. They devastate houses. When people leave their winter homes to stay in their summer herding houses, they usually leave the doors of their deserted homes open, so the bears don’t destroy those, too.”

A carpet of nails is often deployed at house entrances to prevent bears from entering, “but the measure shows only limited effect against a determined brown bear,” relates Werhahn. “Support is needed to help local communities live alongside a carnivore community of brown bears, wolves, Eurasian lynx and snow leopards.”

Werhahn’s efforts to do just that began in 2014 and led to the Himalayan Wolves Project. The research recently branched out and is now called the Himalayan Carnivores Project, reflecting an ecosystem that supports several carnivore species.

The adaptations that allow humans to survive in these extreme environments “remain poorly understood,” says Werhahn. “The situation is similar for the Himalayan wolf. The genetic and physiological mechanisms involved in high-altitude adaptation have only recently been studied.”

The Himalayan wolf lineage pre-dominates above 4,000 meters (roughly 13,000 feet). “The low oxygen availability at this high altitude presents environmental stress in the form of severe, lifelong hypoxia,” says Werhahn. “This constitutes a constant selective pressure that has shaped the genomes of species inhabiting these ecosystems and led to functional and physiological adaptations to cope with the conditions.”

That evolution can be driven by genetic variations that affect fitness in one habitat, according to Werhahn and colleagues, and are neutral or almost so in others, like the genes responsible for the Himalayan wolf’s high altitude hypoxia adaptation. “Speciation can be facilitated through strong habitat clines,” state the biologists, “such as the dramatic altitude difference that separates the Tibetan Plateau and the Himalayas from the surrounding, lower-lying regions.”

When Werhahn and colleagues started the project, the scarce data available indicated a genetic difference between Himalayan wolves and gray wolves, but the researchers had no explanation. “We now know that Himalayan wolves are indeed different, from their genetics to their ecology, and we have an indication why,” Werhahn says. “It’s the evolutionary challenge posed by the low oxygen levels in these extreme high altitudes.”

Adds Dave Mech, a wolf biologist at the U.S. Geological Survey and the University of Minnesota, and founder of the International Wolf Center, “The most interesting consequence of the Himalayan wolf’s unique high-altitude adaptation is that it separates this wolf genetically from neighboring wolves that lack it.”

The WildCRU scientists originally believed that the Himalayan wolf was found only in the Himalayas proper. Himalayan wolves, they discovered, in fact live across the high-altitude regions of Asia.

A wolf that stands alone

The team’s work adds to growing evidence that the Himalayan wolf “merits taxonomic recognition,” write the researchers. The lineage is monophyletic: a group of organisms in the same taxon that share a common recent ancestor; inhabits a geographically distinct region; and has genetic characteristics not found in populations of its closest relatives.

The findings can be used as the basis for a formal recognition of the Himalayan wolf as its own taxon, Werhahn believes. “That would pave the way to assign it a conservation status by the International Union for Conservation of Nature [IUCN]. These are pivotal steps needed to advance the protection of these wolves and their habitats.”

Assignment on the IUCN Red list, the biologists say, “could focus the attention of regional and international bodies on Himalayan wolves, their habitat and the imperiled ecosystem in which they live.”

The Red List shows trends in extinction risk for species; it is used by governments to track progress toward biodiversity-loss reduction targets. Werhahn’s group plans further studies to explore behavioral and ecological aspects of the wolves’ lives. “That, along with helping local communities develop conservation plans for Himalayan wolves that would apply across the region,” she says, are the keys to this rare canid’s future in far lands on The Roof of the World.