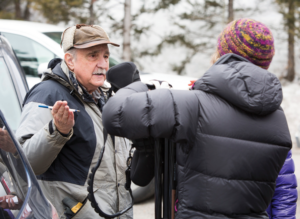 Summary
The International Wolf Center is seeking applicants for the 2023 Dr. L. David Mech fellowships.  As an investment in the future of wolf research and science-based wolf education the Center each year awards up to two (2) fellowships in the spring of 2023 for undergraduate students or recent graduates interested in pursuing careers in natural sciences with an interest in wildlife.  Fellowship recipients receive a $6,000 stipend and up to $4,000 in support for field research expenses.

Description
The mission of the International Wolf Center is to advance the survival of wolf populations by teaching about wolves, their relationship to wildlands and the human role in their future.  Since our founding in 1985 by Dr. L. David Mech and others, the Center has sought to provide the latest scientific information about wolves to our visitors and program participants.  We believe that continued investment in scientific discovery about wolves and other wildlife will lead to increased understanding of how to build a future where wolves and humans can coexist and thrive.  We also understand that many barriers exist for students and early career researchers and hope these fellowships can be useful tools for opening up access to people pursuing a wildlife biology career.

Stipends are meant to support study and research during the tenure of the appointment.  They are not salaries and fellowship recipients are not employees or contracted workers of the International Wolf Center. All funds provided, including stipends and research allowances, are subject to tax. Fellows awarded stipends receive a financial summary at the end of each calendar year and are responsible for meeting their own state and federal tax obligations.

Research allowances are for equipment, supplies, research-related travel costs, and other support required to conduct the research itself.  A budget and general justification for these expenses must be included with your application. Funding for these costs does not need to be secured at this time.

Fellowship applications will be reviewed by the selection team using the following criteria:

Fellows will be expected to present an online webinar summarizing their field research experience and research findings in 2023.

Fellowship recipients will also be expected to submit a summary report to the International Wolf Center and be willing to be interviewed and photographed by Center staff. These materials may be used in issues of International Wolf magazine or in web/social media posts.

Apply for this fellowship (coming soon).  Along with providing contact information, please be prepared to upload the following with your application:

Who is Dr. L David Mech?

L. David Mech (pronounced “Meech”) is a Senior Research Scientist with the Biological Resources Division, U.S. Geological Survey and an Adjunct Professor in the Department of Fisheries, Wildlife and Conservation Biology, and Department of Ecology, Evolution and Behavior at the University of Minnesota. He has studied wolves and their prey since 1958, as well as several other species of wildlife.

Although administration of his U.S. Geological Survey research is through Northern Prairie Wildlife Research Center, he is headquartered on the St. Paul Campus of the University of Minnesota in the Raptor Center, 1920 Fitch Ave., St. Paul, MN 55108.

Do I need to design my own project or can I get funded to participate as a volunteer on an established project?

Fellowship recipients may design their own project or work as a volunteer or intern on an established wolf project with other researchers.

Can my project take place at a zoo or animal sanctuary?

Yes, “ex situ” projects at a facility with captive animals are eligible but must contain a significant scientific research component.

I am not from the United States, can I apply?

At this point, fellowship recipients must be U.S. citizens to qualify but projects may take place internationally.

I’m interested in volunteering with an existing wolf project – where can I find one to connect with?

Almost every state and country that has an active wolf population has researchers and wildlife managers studying them. Often these projects are led by state wildlife or natural resource departments or local universities with wildlife biology programs. Some of the largest wolf research projects have an online presence including the Yellowstone Wolf Project, Voyageurs Wolf Project and the Scandinavian Wolf Research Project.  A great place to start looking for wolf and other canid projects is the Canid Specialist Group of the IUCN or on the Texas A&M Job Board.