My close and unforgettable encounters with wolves

You are here: Home1 / Wolf Info2 / Facts vs Fiction3 / My close and unforgettable encounters with wolves

I’ve always revered them, having had several close encounters over the years. Each has left me with a feeling that has persisted a lifetime.

My first interaction with a wolf was when I was a teenager living in the Upper Ottawa Valley near Petawawa, Ont. I used to love to go to the backcountry and see the wildlife in unspoiled territory. 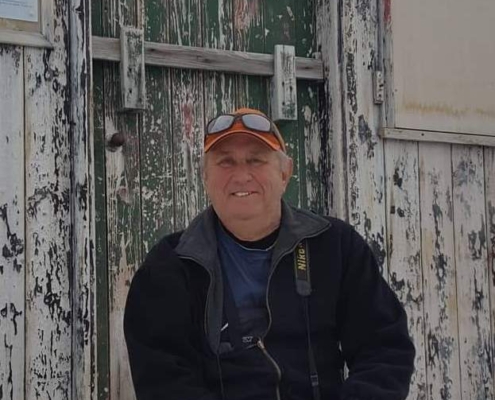 I was walking along a long dirt road that spread out for a couple of kilometres in front of me. The tree-lined edges focused my eyes on the road. Suddenly, a fisher (a large member of the weasel family) darted out of the woods and raced down the roadway with a lanky grey wolf on its tail. They moved too fast for me to tell what the outcome was, but clearly, the wolf wasn’t interested in playing games – it was dinner time!

My guess is the wolf probably won but I’m sure the fisher made it work for it. The wonder of this was that both animals were first-time sightings for me.

I was camping alone in Algonquin Park in Ontario one October weekend and, while I prepared my mind and gear for the hikes that awaited that day, I sat on the picnic table at my campsite. Out of the corner of my eye, a sleek grey animal emerged from the edge of the forest, trotted to within 50 metres of me, stopped, looked at me and approached even more closely.

The wolf came within 25 metres and stared at me as if looking through me. It then trotted back into the bush, satisfied that I was neither tasty nor a threat. The moment we made eye contact was magical.

On another occasion, I was doing breeding bird surveys in the Parry Sound, Ont., area and had to do an eight-km transect through the bush for a new proposed roadway. The walk in was uneventful except for the bear (that’s another story), but at the end of the day, the light was fading fast and I was anxious to get out of the bush before it became totally dark.

As I neared the road, an eerie and prolonged howl broke the silence between me and the car.

Not sure what to do, I made a bit of noise and proceeded slowly to the car, hoping the wolf would be scared off. Finally at the car, I got in and started to drive, glad and sad that I didn’t see the wolf.

But as I started to drive, there it was – a lovely young wolf stood on the road and again the eye contact was magical. It’s almost like it had serenaded me and then showed itself so I could see its majesty.

Recently, I was in the Rainy River-Kenora area of Ontario for a few days. We had seen wolf scat but no animals until the last night we were there.

While driving back from late-evening bird surveys, we spotted a large animal on the shoulder of the road. We soon realized it was a fairly big wolf – the shaggy mane and broad shoulders gave us clues to its identity. As we approached, it moved off the road to get away from the car, so I suggested to my friend that we just sit quietly for a few moments and wait.

Soon we heard it in the brush beside the road but in the darkening light couldn’t see it. Then suddenly, it emerged onto a small pathway beside the road and stood in full view about 25 metres away. We made eye contact until it decided it had enough and moved back into the woods, only to emerge about 10 metres further away to have one last look at us before melting back into the forest.

As a youth, I recall going to Algonquin to participate in the wolf howls. These were scholastic outings to see if we could get wolves to respond to our calling. We howled and yipped on that crisp October night. To our amazement, three packs responded.

What an amazing, unforgettable and lucky time I’ve had with these wonderful animals.