Wolf and wolf-dog hybrid ownership by private citizens has long been a contentious issue in the United States. What exactly is a hybrid?

Wolf-dog hybrid (hybrid for short) is a term used to describe an animal that is part wolf and part domestic dog. Dogs (Canis lupus familiaris) and wolves (Canis lupus) share an evolutionary past and thus share many physical and behavioral traits.

Wolves are wild animals, and they are shaped by evolutionary pressures that allow them to find food, keep themselves safe, and produce offspring. The genetics that they express in the environments they live in allow them to survive, without the help of humans (Addams, and Miller 2012)

Dogs evolved from wolves through a centuries-long process of domestication. Domestication is the process by which a wild animal adapts to living with humans by being selectively bred by humans over thousands of years. 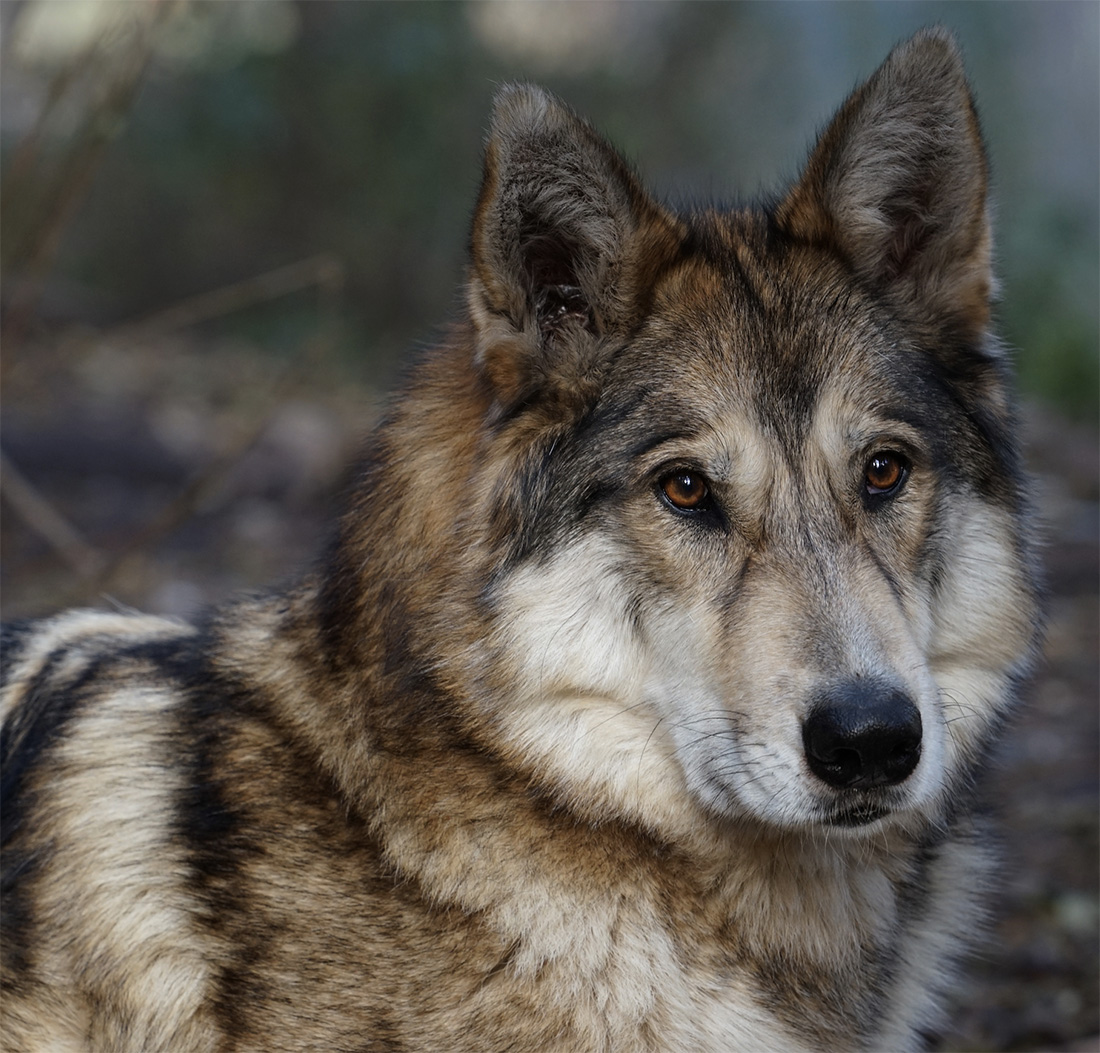 This photo shows a mid wolf content wolf hybrid at the W.O.L.F. Sanctuary in Colorado.

Through this process, a dog’s behavior, life cycle and physiology have become permanently altered from that of a wolf.  In essence, the selective breeding process has put a different set of pressures on dogs, shaping them so that they are more dependent on  humans for their survival and make them flexible to our way of living.  The genes they express, have been altered to varying degrees from their wild counterpart and help them live that domestic life well (Addams, and Miller 2012).

Wolves and dogs are interfertile, meaning they can breed and produce viable offspring. In other words, wolves can interbreed with dogs, and their offspring are capable of producing offspring themselves. Although hybrids can occur naturally in the wild, they are rare because the territorial nature of wolves leads them to protect their home ranges from intruding canines such as dogs, coyotes and other wolves.

Governed by their instincts, wolves, both in the wild and in captivity, exhibit behavior that is relatively consistent. Their behavioral characteristics have been studied and observed for many decades by researchers, and much has been published about their social dynamics, hunting behavior and territorial nature. Thanks to the researchers’ hard work, we are able to understand the wolf’s reactions to different situations based on their inherent instincts. However, just as with any wild animal, their behavior will always retain some unpredictability.

People who own hybrids often find that their pet’s behavior makes it a challenge to care for. The diversity of genetic composition even within one litter of hybrid pups leads to a wide range of appearances and behavior patterns among all hybrids, thus making their behavior inconsistent and more difficult to predict.

Wolves and dogs mature at different rates, which makes the physical and mental development of a hybrid animal unpredictable. Sexual maturity of wolves signals a shift in hormone quantity and balance. This hormonal change is often coupled with behavioral changes in the animal.

When a wolf reaches sexual maturity (anywhere from 1 to 4 years of age), their role in the pack often changes from that of a pup to an adult expected to contribute to the pack. Status becomes much more important, and the animal may begin testing its packmates to achieve a higher-ranking position in the pack. Testing or challenging of packmates can be transferred onto a human “leader” when a wolf is kept in captivity, causing the animal to be perceived as stubborn, bold or even aggressive.

Domestic dogs tend to mature much earlier (6 to 8 months of age)., but the challenging behavior still exists, although it is typically less intense in most breeds compared to wolves. Hybrids can exhibit any combination of wolf or dog maturation rates and behavioral changes.

Additionally, the territorial instinct of wolves to protect their food source by establishing a home range through defecation and urination may be transferred to the owner’s home. A couch or corner of the room may take the place of a tree or rock. Dogs, on the other hand, through domestication, have lost that instinct to urinate or defecate anywhere they feel is their territory and are easily trained to eliminate in a designated area.

Hybrids, being a mix of these two distinct behavior patterns, may have any degree of territorial or testing behavior-from one end of the spectrum to the other. 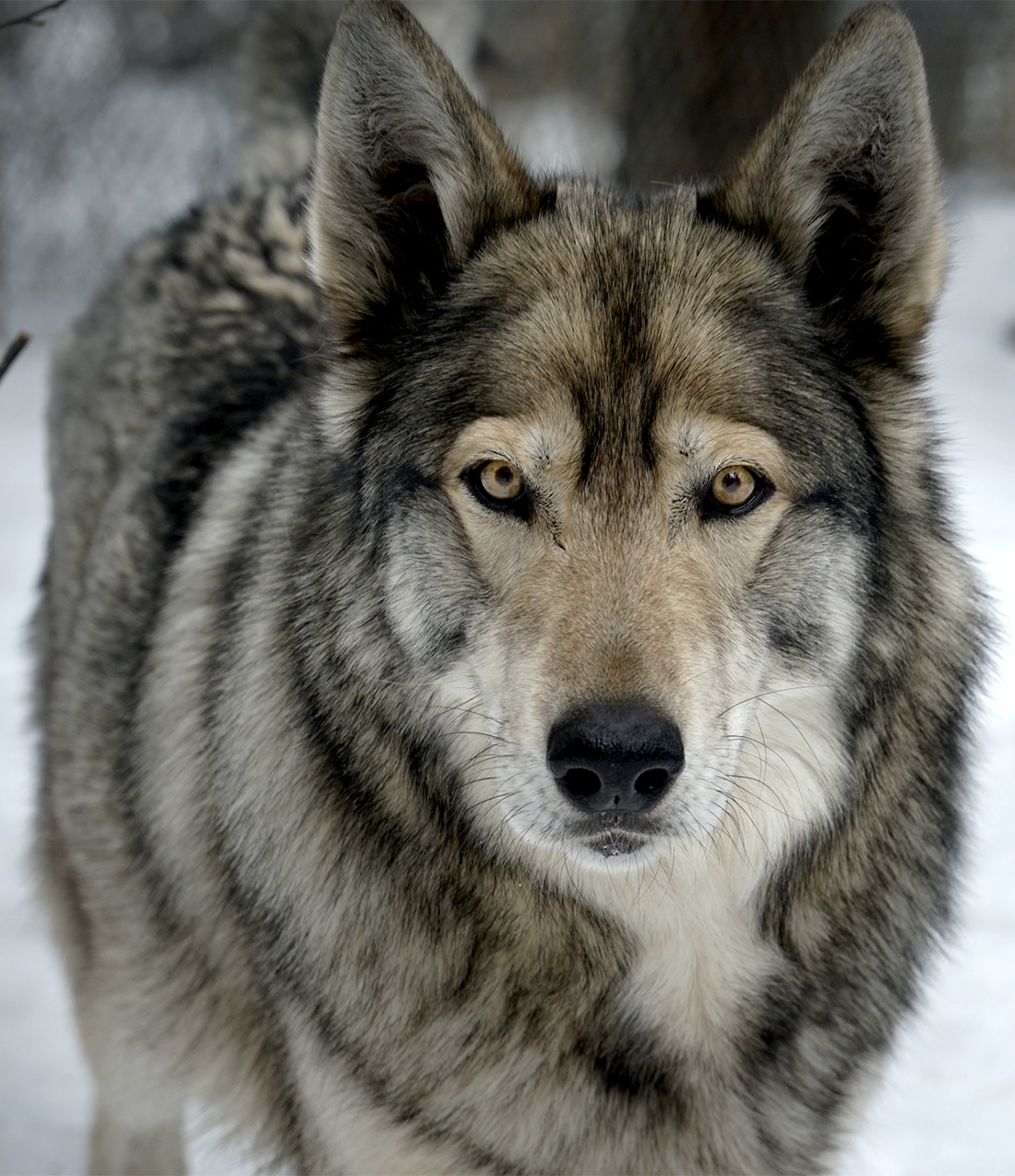 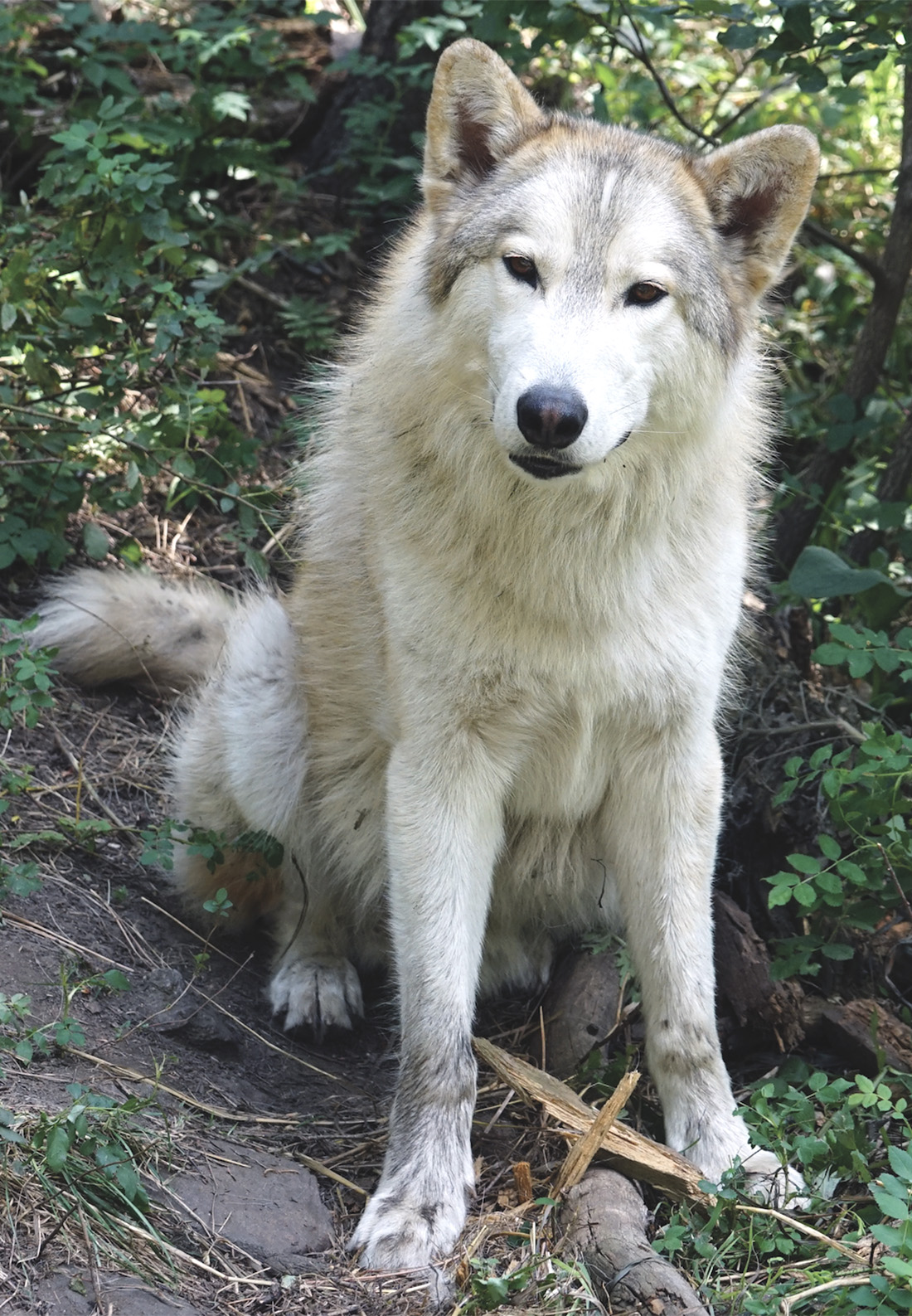 Whether or not hybrids make good pets is perhaps the biggest contention. The reality is that there is an animal with a genetic stew that includes contributions from a line of dogs that has been domesticated over the centuries compiled with a contribution of an animal that has not.

Wolves are social by nature and demand a great amount of attention and interaction from their pack. This expectation translates onto the owner when a wolf is kept in captivity. Often, potential hybrid owners overlook the important task of understanding the nature of the wild wolf and the domestic dog and become overwhelmed when their “pet” begins to show behavioral traits that are unexpected and unmanageable.

One organization educating the public about the issues of wolf and hybrid ownership is Wolf Park. Wolf Park explains that while many individuals do make an effort to become educated about the potential outcome of owning a wolf or hybrid, others unfortunately do not. This results in the animals being kept in an environment where their social and behavioral needs are not met. In these situations, the animals frequently spend their days in small cages or tied to chains, with very poor quality of life.

When any animal, wild or domestic, is kept in conditions inadequate to their mental and physical needs, there is a safety risk for humans. This risk is almost always preventable through proper preparation before the animal is purchased and continued through responsible care for the animal over the duration of its life.

Every year, thousands of pet wolves or hybrids are abandoned, rescued or euthanized because people purchase an animal they were not prepared to care for. A few facilities exist around the country that take in unwanted canines, but their resources are usually very limited. Education about the behavior, health and containment of wolves and hybrids and about laws pertinent to their ownership before people buy may prevent hardships for both human and animal.

MYTH: A wolf hybrid will make a better guard dog.

FACT: Due to the shy nature of wolves, hybrids usually make poor protection dogs. Aggressive tendencies, if any, in the hybrid may be fear induced and as such, can be unpredictable and hard to control.

MYTH: A wolf hybrid will live longer than a dog.

FACT: The life span of a wolf in captivity is 12-14 years – the same as a large domestic dog.

MYTH: Hybrids are healthier than dogs, and are less prone to disease.

FACT: Wolves and dogs are prone to the same infectious diseases. There may be some question as to the efficacy of standard dog vaccines in wolves and some hybrids.

FACT: Huskies and malamutes are breeds of dogs, like any other.

Many breeders who deal in wolf hybrids promote the ‘wolf content’ of the pups and even set their prices according to the ‘amount of wolf blood’ in the litter. This is not based on sound biology or genetics.

When one breeds a dog with a wolf, the offspring will inherit a set of genes from each parent, and are indeed 50/50 – that is, one-half dog and one-half wolf. However, when these animals are  backcrossed with other wolves, dogs, or hybrids there is no way to calculate or manipulate which genes are passed to any individual offspring.  Often breeders believe, for example, that a 50 x 50 hybrid backcrossed with a 100% wolf would yield an offspring that is 75% wolf.  However, that would only be an AVERAGE amount of wolf in a large number of backcrosses.  Any INDIVIDUAL  animal  might inherit all of the dog genes from the hybrid and be 50 x 50 – both physically and behaviorally. Or conversely,  any individual could be predominantly wolf, or any variation or combination in between. It is like throwing 50 blue marbles representing a male parent and 50 yellow marbles representing the female parent into a bag and randomly selecting the 50 marbles that will represent the DNA of one offspring.  You don’t know what you will get. The ideal wolf hybrid would be one that looks like a wolf and behaves like a dog, but unfortunately, many times one ends up with an animal that looks like a dog and has the perceived “obstinate” nature of a wolf.

There are genetic tests available. Those tests look at 3-4 genetic markers, depending on whether it is a male or female. According to the testing lab,  what the test can tell the owner is whether there has been wild wolf DNA in that domestic dogs lineage in the past three generations.  Others don’t see the test as reliable yet,  that what the information shows is that the DNA found simply does not match any known domestic dog DNA on file. This all contributes to the uncertainty of how to determine what is a hybrid.  Many people working with hybrids look at a number of factors: physical appearance, and behavioral history to make an educated decision about whether an animal is a hybrid. The result is to label hybrid as low, medium or high content wolf depending on the degree to which the animal looks and behaves like a wolf. 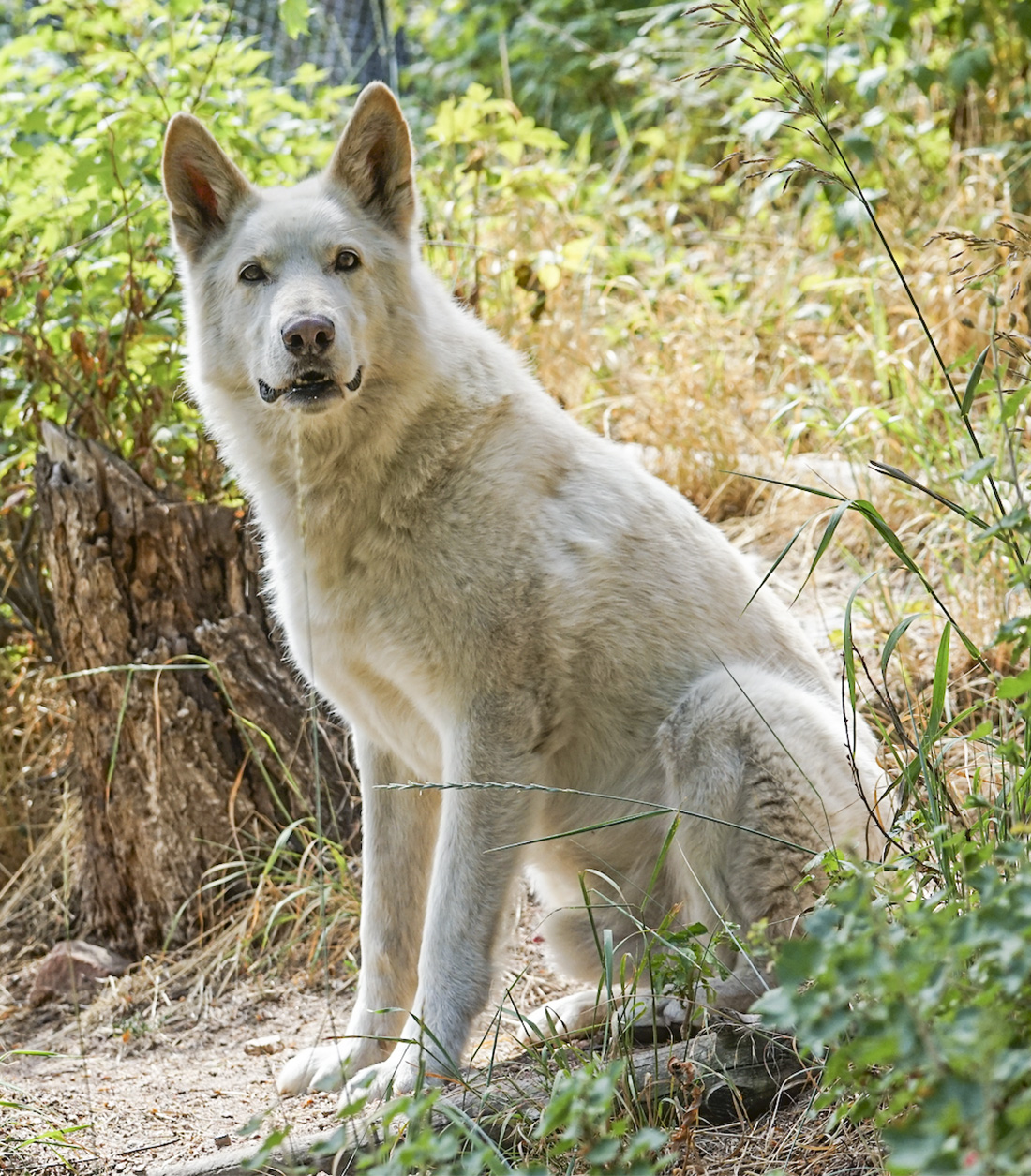 This photo is of a low wolf content hybrid at the W.O.L.F. Sanctuary in Colorado.

Rabies vaccinations in hybrids are also complicated, because there has been no vaccine developed and approved for use in wolves or wolfdogs. The reasons for this are also complicated, as it is not seen as profitable by drug companies and to test and create the vaccine, to complete this process would require extensive testing on wolves and wolfdog hybrids, which is seen as unpopular.

Owners are encouraged to provide the rabies vaccine their animals regardless, but some vets do not treat hybrids for liability reasons, particularly where it is illegal to own them, and those vets that will treat them often require owners to sign a waiver that states they understand the vaccine is being administered for “off label” use and cannot be relied upon to deliver full protection against rabies. In many municipalities, if a known or suspected hybrid bites someone it is impounded and maybe euthanized and tested for rabies, regardless of vaccination status.

What does all this mean?

This all means that the issue of hybrids is very complicated.  A few people are successful in keeping hybrids, but most people for a variety of reasons are not prepared to understand or provide for the physical or psychological needs of the animal.  The higher the content wolf the less likely they can be kept as a house pet and will require special housing, socialization and care. There are legal issues to consider, as well as knowing that some vets are not willing to provide care, and that the rabies vaccine in not approved for use in these animals.

Identifying a wolf, a dog and a hybrid can also be very challenging because of how closely related wolves and dogs are. Being critical in evaluation about behavior, and how adapted a canid is to living in a home with human companions considering safety of the humans, community and ability to live in harmony is most important, and the reality is that animals that are more wolf like in their behavior are unlikely to do well living in our homes.

Here are additional resources to consider when researching wolf-dog hybrids:

Between Wolf and Dog by Jessica Addams and Andrew Miller
Prendergast, Dorothy.

The photo at the top of this page is of a high wolf content hybrid at the W.O.L.F. Sanctuary in Colorado.

Other stories of interest