You are here: Home1 / malik

After this log, Malik will transition to the Gone but Not Forgotten Pack.  What can I say about the wolf that has taught the wolf care staff so much about being an opportunistic pack member.  Malik never rose to the top of a pack, but benefited greatly by having a brother as a dominant pack member.  Who can forget his courage to display some dominance when Shadow was standing over Grizzer, but as soon as Shadow moved away, down would come the ears and the tail and he would gracefully jump to the other side of the pond.  He had a threat display that was like no other; words couldn’t describe the sound he made, nor will wolf care staff forget the dynamics of the pack when Shadow and Maya ruled the Exhibit.  Malik’s more delicate face and graceful movements made him special and his ability to guard and protect food, even from his dominant packmates, taught us that wolves have social rules.  We have lost a great pack member who contributed a wealth of knowledge, endured a lot of transitions and made a lot of smiles, especially as he watched staff members and looked for the perfect opportunity to steal a hat.  As Malik made his final journey to the University of Minnesota Diagnostics lab for a necropsy, he traveled with my hat (the one he stole so many times during wolf care)  and had special instructions to be cremated with the hat.   We will miss Malik dearly and are grateful to all the people who have sent words of support.

As excited as Shadow had been lately, Malik has taken on the opposite behavior.  He’s become temperamental when eating, he has been staying toward the back of the enclosure and he’s showing less tolerance of activity in the wolf yard, especially the equipment used to move snow.  Malik, as a lower ranking wolf, has always been a more nervous individual, but we always have to be mindful when  a nearly 14 year old wolf shows these signs as it might be a symptom of another ailment.  So far there are no other specific issues, but this could also be behavioral.  Shadow is the more dominant of the pair and when Shadow is active, he may be asserting more status over Malik, resulting in a more timid response.  This job requires a combination of physical and behavioral observations to assess overall animal health. 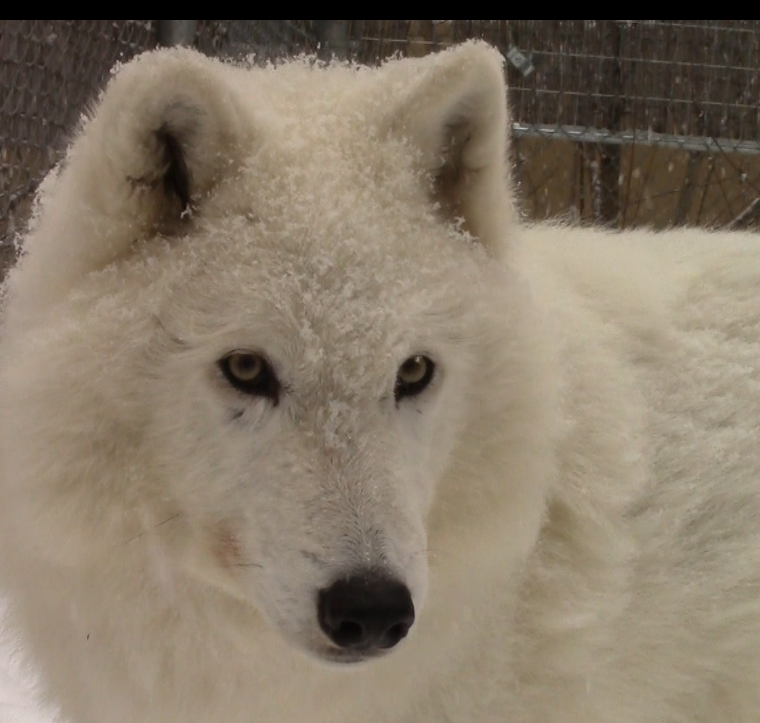 People always ask how we can tell the difference between Malik and Shadow. Here are some definitive clues to help in the ID of these two brothers.  Side by side, Malik has a much slimmer face, a more almond shaped eyes and a raise of hair called a cowlick between his nose.  If you are watching the webcam, the wolf stealing the hat is another clue.  More importantly, the location of the wolves on the webcam is also a hint.  If one wolf is alone inside the den and the other is on top, it is usually Malik inside the den.  Shadow has been more dominant since they were pups and is most often found at the higher vantage point.

I did receive an email about Malik taking my hat during a wolf check.  My hat is wool and there is no harm to Malik in taking it and the only harm I face is a sub-zero day.  Malik has always been an opportunistic wolf, even during the days of his life as the omega of the Exhibit Pack,  It’s great to see he’s still got what it takes at the age of 14.  I also know that if it happened once, it will happen again, so spring better come soon or I won’t have a hat left. 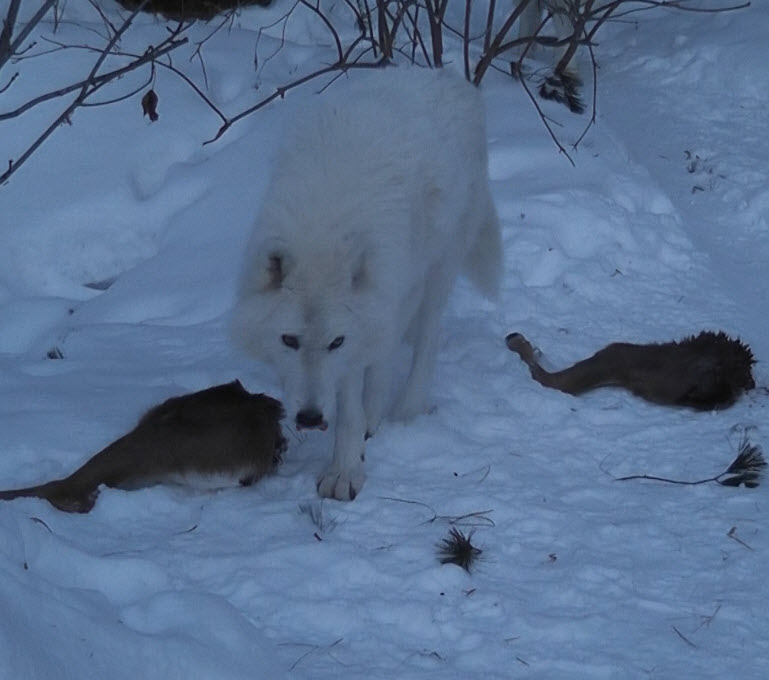 Malik has benefited from the frequent feedings associated with colder weather.  Even though we have a supply of deer, we still purchase chicken and beef for the older animals to increase their calorie intake on these frigid nights which have become much more frequent this winter.  Malik is a wolf that is quick to possess and guard food, so this recent cold weather has given him a lot of opportunities for behavioral displays. 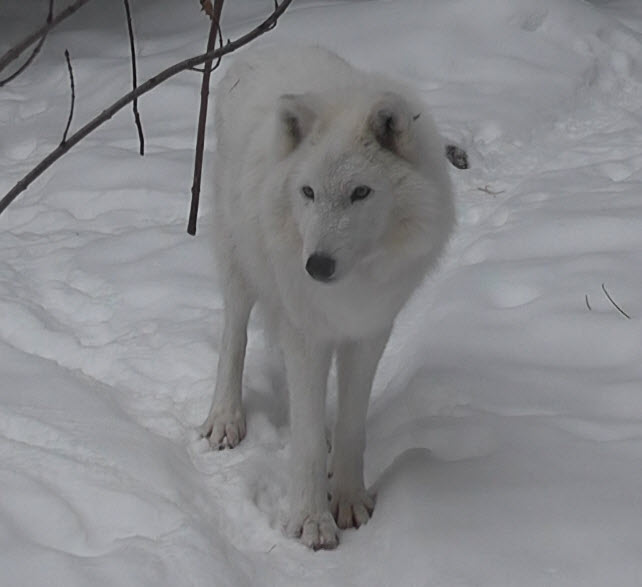 Malik is quite adept at looking for unattended items by wolf care staff.  When we say wolves have a great power of observation, we often refer to the fact that they can pick out a weakness in a prey species from a distance.  In captivity, wolves can also pick out items that have no clear sign of guarding behavior from staff.  Malik is the fastest wolf to remove a set of keys, hats or unattended gloves.  If it’s not protected, then it’s available for the taking.  It’s nice to see that the wolves nearing fourteen years of age are not slowing down. 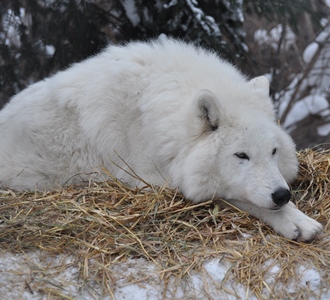 Malik continues to seek opportunities to possess items from wolf care staff. Today, we fed some extra ground beef in a tupperware bowl (metal sticks to meat and wet noses), so of course, Malik had to focus on sneaking in and taking the bowl for a tour around the enclosure. It’s these moments that make us forget these arctics will be 14 years of age in May. These are more of the antics of a 4 month old pup than a 14 year old male. Forever Young, Malik will never outgrow this personality trait. 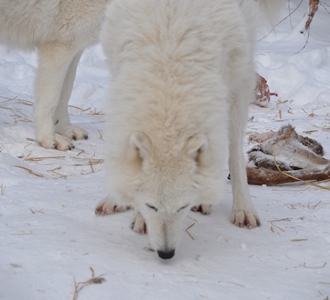 This log written by Wolf Care Staff volunteer, Cameron Feaster. Malik has been very focused on food recently. Between him and Shadow, it’s Malik who does most of the caching and re-caching of meals brought into the enclosure. He seems to have a daily routine of checking on his caches to see if his brother has eaten or moved them, and then it’s back to resting in his warm, straw-filled den. 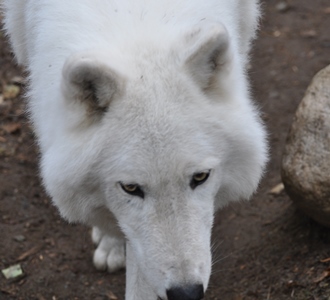 Just finished washing the water containers in all of the enclosures and once again, Malik stole the sponge. For a 13 year old wolf, he is alert. Malik stealing a sponge is an ongoing interaction, but it does have some other benefit than just Malik entertainment. If I need to move Malik to another enclosure or need to distract him so someone can apply fly ointment, the yellow sponge will be a distraction. There hasn’t been any additional damage to the wood security fence behind Shadow and Malik’s enclosure (a wild wolf did some damage in response to food in the retired enclosure a few weeks ago) and Malik seems far less anxious than he has since that event occurred.
This will be the only posting this week due to the International Wolf Center Symposium in Duluth, Minnesota that starts on Thursday. There are still opportunities to register, check out the details at www.wolf.org. 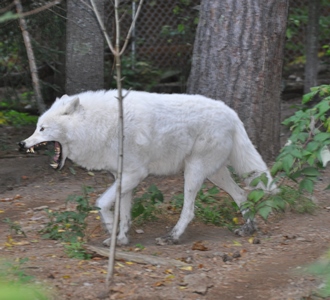 Malik’s foot is completely healed and the presence of the wild wolf behind the enclosure seems to have stimulated a significant amount of marking and scraping behavior. He’s been a bit anxious about some late season facilities work, but surveillance video shows him resting on the den with Shadow. We haven’t observed much seasonal dominance between the pack mates, but temperatures have been quite warm for September.