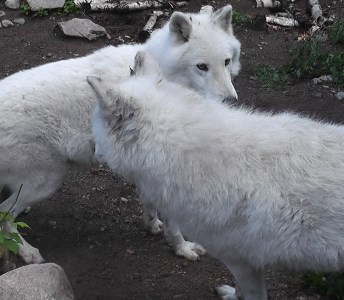 The logs this week are all the same. It’s been a busy week. We started with the discovery of some damage to an outside security fence behind the Retired Enclosure. It appears a wild wolf attempted to get into the secondary security fence behind the retired enclosure. There were a significant number of boards torn from the fencing with a lot of teeth marks. Surveillance video shows that it likely occurred on Sunday morning, although we don’t have a camera pointing directly at this fence, Shadow showed some tension and agitation. We had a group of students from Vermilion Community College volunteer with some invasive species removal. This is critical as the plants that they were pulling harden off with hundreds of burrs that get stuck in the wolves coats. Unfortunately, Aidan seemed to have the most stress about the work project. He was agitated while he was in holding, then after the students left and Aidan was released, he proceeded to have some fear avoidance behavior throughout the weekend. This created some interest from the other wolves that saw the dominant pack leader showing some weakness. We impose a lot of limits on activity in the wolf yard as winter approaches, but the removal of the invasive species is critical work that saves a lot of wolf frustration as staff try to pull burrs from their coat.