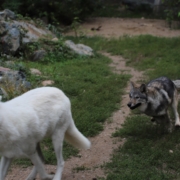 Rieka’s introduction occurred on August 9th and as previously reported, we had a behavioral observation team that recorded data.  We had the opportunity to work with a recent Wildlife Biology graduate, Kyle Kinkade, who donated a few days at the Center helping with projects.   The first order of business was to help sort Rieka’s behavioral team’s data.  Here is a summary of his  analysis:

In addition to wolf care team members working morning and evening shifts of wolf care to help Rieka integrate into the pack, the Center’s educators make daily observations and report activity that they witness from the auditorium while interacting with visitors.  The Center remains open 7 days a week, from 9 am – 5 pm, so there are plenty of observations.  Here is portions of a report from 9/25/21.

At about 9:45 Rieka came back down and was splashing the water in the pond with her feet. Grayson came down from the woods to investigate. When Rieka saw Grayson, she began chasing after him. Axel saw her and Grayson playing and came running over with his tail in a T2 position. Rieka stopped chasing Grayson, greeted Axel and the two licked each other’s muzzles a few times and then all three wolves began chasing each other. They ran up into the woods shortly after this.
A few minutes later Grayson came trotting down out of the woods, followed shortly after by Axel with Rieka chasing him with her tail in a T2 position. During all of the chase sequences today Rieka had her tail in a T2 position unless Axel was chasing her. When Axel would turn around to chase her, she would run with her tail slightly tucked.
When Axel and Grayson took a quick break from playing with Rieka she continued playing by herself–running around in front of the windows and chasing her tail. Grayson got on top of the pumphouse and Rieka came and did a play-bow but he ignored her and turned away. She then grabbed his tail and started tugging on it–Grayson quickly turned around with his lips curled and snarled at her. When Grayson did this, Axel came trotting over and Rieka’s attention diverted to him and they began playing together. After a short time of playing, Axel walked over to the pond to drink. Rieka followed him and laid down next to him. She jabbed at his foreleg a couple times and then tried to roll over but she was too close to the edge of the pond and ended up falling in. She quickly got out and all three wolves began chasing each other again. 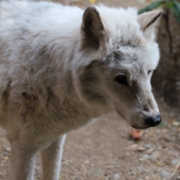 Certainly the focus for the summer was on Rieka, but staff are always diligent about ensuring our oldest pack members have the care they need.  Grizzer and Denali enjoyed sharing a fenceline with Rieka and were willing participants for the many  Behind the Scenes programs.  Grizzer is still active and has displayed some playbows to staff throughout the many hours of wolf care.  As the warm summer comes to a close, they have both started to grow their winter coats. 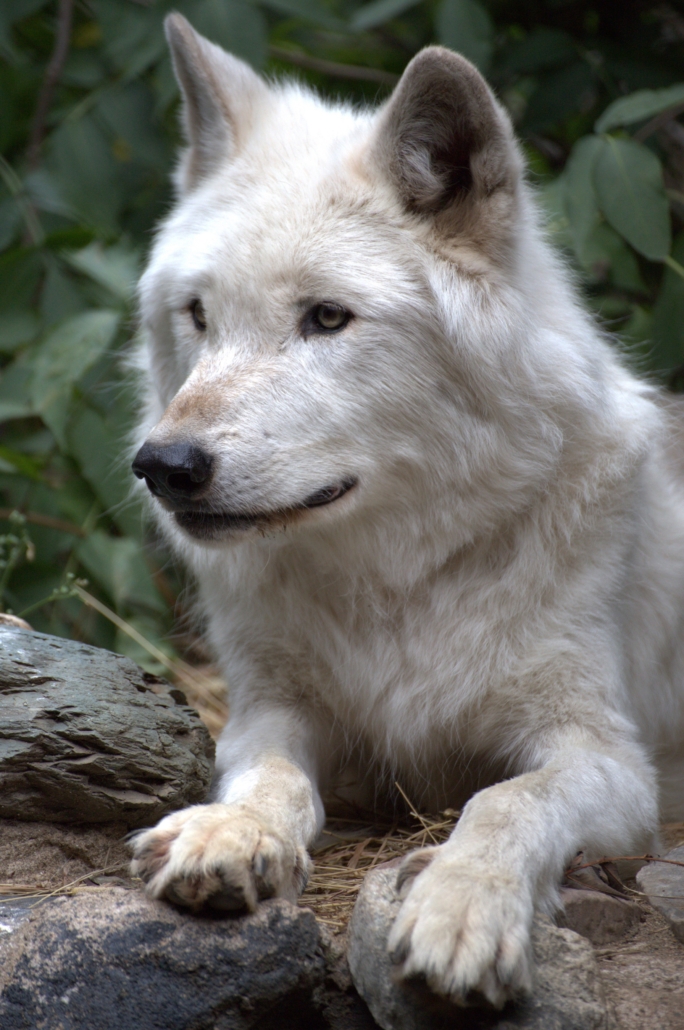 Denali resting on the East Side Den 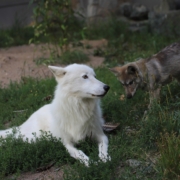 Rieka was brought into the Exhibit Pack space on August 9th, 2021.  She weighed approximately 23 pounds and was 79 days old.  The introduction started in the Pack Holding Area with Axel and Grayson coming into the smaller space to meet Rieka.  The initial greetings went well despite Axel and Grayson being nervous in the smaller space.  As the wolves were moved back into the larger exhibit space,  Rieka was intimidated by the excitement and activity of the adults which resulted in her seeking comfort in the medical pen, a space that she utilized as a young pup.  Within a few hours, Rieka found some food scraps and bones to occupy her time and sought comfort with the wolf care staff when needed.  She has a bold personality, exploring and approaching the adults, especially when staff are providing food resources.  The Center had two behavioral teams monitoring Rieka’s progress over the days following the introduction. The first team was on-site, rotating 6-hour shifts to provide coverage 24 hours a day for the first week of the introduction.  The second team was a virtual team that observed the two Explore.org cameras and the Center’s Exhibit Pac.  Both teams entered data on the Center’s Ethogram platform and captured images and video to document the behaviors.  We currently processing the excel spreadsheet with over 1500 observations.   Over 30%of the observations listed Rieka as the “Instigator” of behaviors that included climbing, exploring, approaching and nose to nose greetings, primarily with Grayson.  She is more intimidated by Axel, so wolf care staff are spending time in the enclosure each night from 5 pm to 9 pm to encourage her to interact with Axel and Grayson and to ensure that she eats after the temperatures cool off for the night. 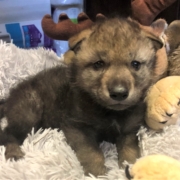 This page is all about the newest addition to the pack at the International Wolf Center. Meet Rieka! Her name (pronounced Rye-kuh) means power of the wolf; peaceful ruler; power of the home.

There have been many anxious moments since her adoption. We are reaching milestones on a daily basis and we see her strength as she grows both physically and behaviorally.  We thought we would use this forum for posting photos and statistics of her development. 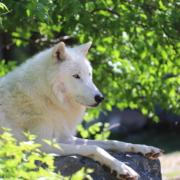 With white coats, the arctic wolves may not absorb as much heat, but they still have the behavioral pattern of seeking shade and becoming more nocturnal in activity.   In this photo, Axel finds a cool spot on the main greeting rock that is well protected by the adjacent tree cover. 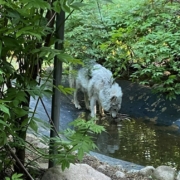 The next 3 days will be extreme with record high temperatures and the potential for high humidity.  These conditions will be concerning for all of our wolves, but especially the retired wolves.  This is more problematic than a hot July day since the wolves are still in the middle of their shedding process.  Staff are diligently brushing the wolves on a daily basis to remove this heavy undercoat.  We are fortunate to have many shaded spaces, cool layers of sand, trees that shade and cool through their transportation, misting systems and ponds for taking a dip.  Even Grizzer likes to wade into the pond to get some relief from the heat.  Staff will be diligent over the weekend to make sure there are not signs of animal health issues with the heat. 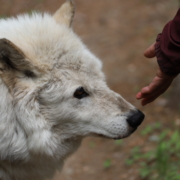 Twenty days ago, we celebrated a milestone.  Grizzer turned 17 years of age on May 5th, 2021.  We shared his birthday with some of his favorite staff; Wolf Specialist Abby Keller made him a birthday cake that he enjoyed (well, Denali helped).  We see Grizzer slowing down, but not losing his personality or spunk.  Due to some advancing cataracts, he relies heavily on his sense of smell.  A decline in vision has not impacted his awareness.  He manages to identify our Veterinarian from a distance, usually with a warning bark-howl.   To try and reduce some of his tension about a vet visit  as well as some of the chainsaw work done by the Vermilion student work crews, we are trying to integrate our Vet and VCC instructor, Ryan Miller into the wolf care team.  So far, Grizzer has been the biggest challenge, posturing and testing just like he did when he was a yearling, although a bit slower.  We use techniques to help the process including using positive associations.   With the new person’s smell (maybe from a t-shirt or flat hand at the fence) along with a treat, we try to gain acceptance.   So far, what we have gained is an appreciate that regardless the age, a wolf’s personality seems to live on.  Grizzer was a bold, testing yearling and he’s a bold testing 17 year old.  Denali’s response has been quite different.  Denali’s has displayed more playbows and social instigation, indicative of his history as a pack member that was most concerned with the food being delivered rather than the staff that made the delivery.   In this week’s photo, Grizzer uses his sense of smell to determine the staff interactions and the photos below show his birthday cake and the attitude of a yearling wolf, posturing and testing the dominant wolf, Shadow. 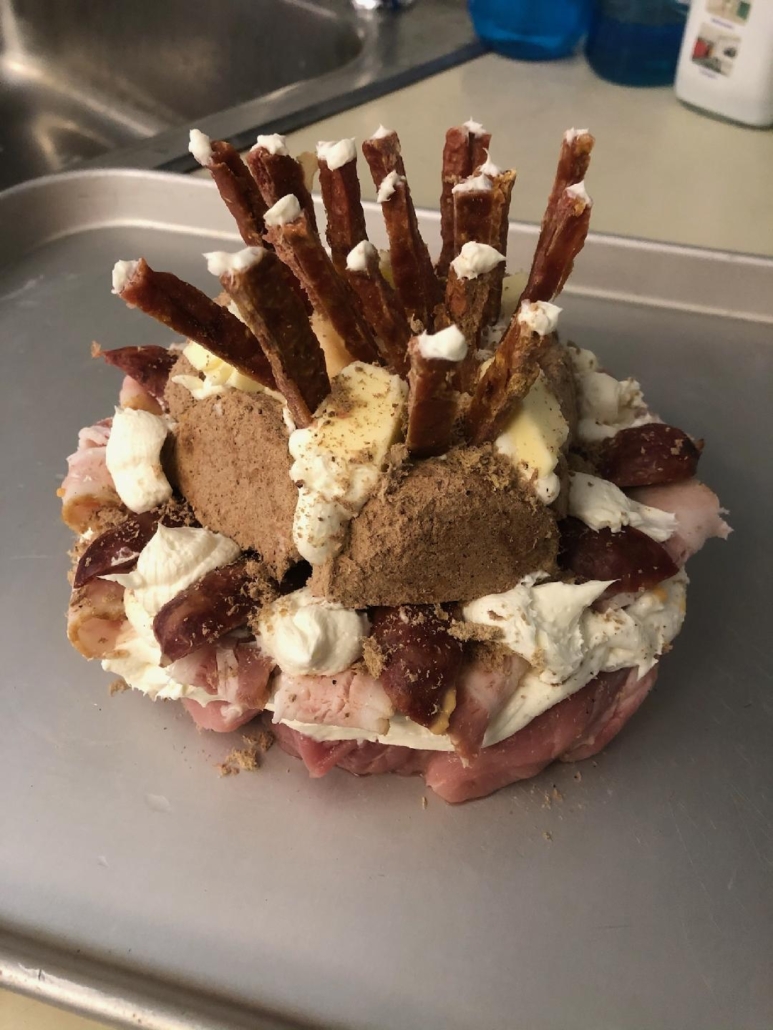 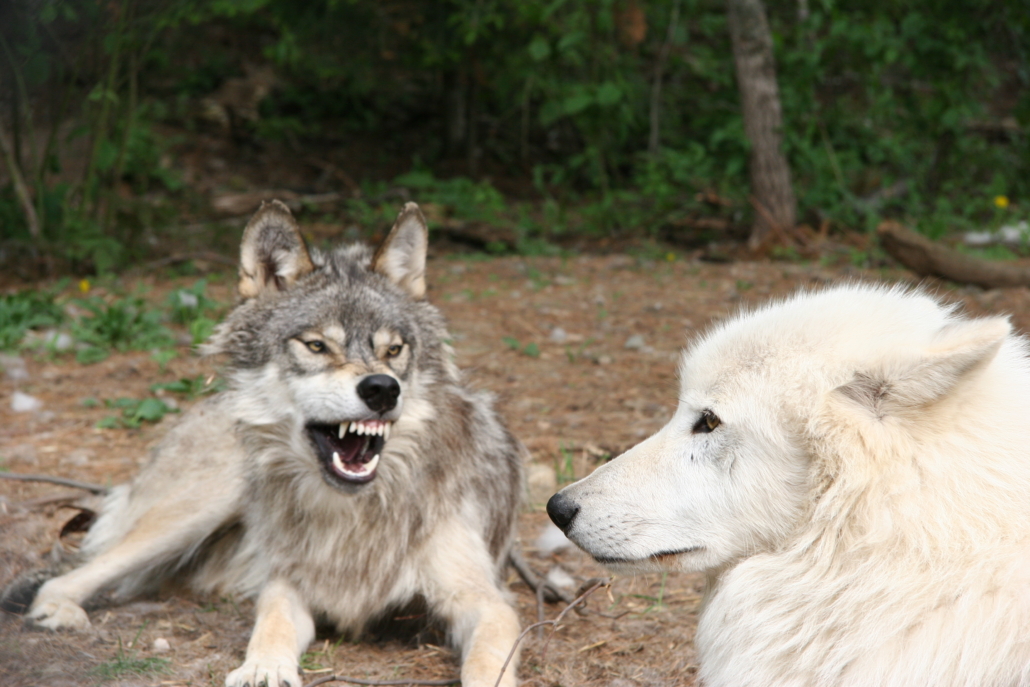 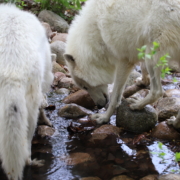 So sorry for the extended delay in posting;  Since our last post, we have transitioned out of winter and right past spring into some hot, humid weather.  By the seasonal calendar, May is still considered spring, but with temperatures in the 80 degree range, the wolves can have challenges keeping cool.  We are fortunate to have a pond and a pump system that circulates water through a UV filter system to help keep the pond relatively algae free during the heat.  In this week’s image, Axel and Grayson investigate the flow of the upper pond.  This photo clearly shows the oversized foot per leg ratio that is classic wolf. 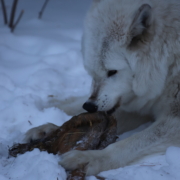 We survived the Polar Vortex, most importantly, Grizzer at the age of nearly 17, survived the Polar Vortex with rural Ely breaking a record of -50.2 below zero.  We were a bit warmer up on the hill at the Center with -37 being our coldest.   The use  of the Wolf Care Center, a 70 degree building for morning feedings and extra food resources made the days more tolerable.  Now that the weather is moderating, we are able to feed more carcasses that will stay thawed for more than an hour when sitting in the snowbanks of the enclosure.   Grizzer can easily defend his food from Denali, but if not, staff have back up dinners prepared. 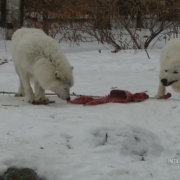 Each week, I try to pick one of the many photos on the Explore.org Gallery pages.  This week I have selected an image from Tina Warne.  The photo shows Axel on the right with a slight food defensive face towards Grayson on the left. While it often appears that Grayson has to wait for dinner, we do monitor scats and see that he gets his fair share of food (even if it has to be a post feeding chicken breakfast).  On Thursday night, staff fed 2 beaver to the Exhibit Pack.  The Vermilion Community College Wolf Ethology class was on site learning the data collection techniques and software to begin their spring assessment of the dynamics between Axel and Grayson.  This is a trial period for a new data collection app that we hope to adopt for the pup introduction.  We will post data results from the students research during their final exam period in May.