For Wolf Awareness Week in 2020, the International Wolf Center profiled three wolf biologists. This story on Sarah Hoy is one of those three.

To read our story on Austin Homkes, click here.

To read our story on Jeremy SunderRaj, click here.

Few places in the world are more fascinating for wolf biologists than Isle Royale, an island about 20 miles off the shores of northern Minnesota on Lake Superior.

For more than 60 years, biologists have closely studied the predator/prey relationship between wolves and moose on the island.

So, when Sarah Hoy saw a job posting to study wolves on the island, she quickly applied. Sure, she lived in England. No, she’d never been to the United States. No, she’d never studied wolves. But, she figured, it was worth a shot.

She was invited for an interview and before she knew it, she was offered the job. Within a month, she’d moved from Scotland to Houghton, Michigan, to start her new career as a research assistant professor at Michigan Technological University.

While Hoy’s resume lacked any wolf-specific research, it did have all the qualities that her colleagues were looking for. She had already earned her PhD and had plenty of experience studying predator/prey relationships and working in remote and challenging locations. She’d studied frogs in Ecuador and Costa Rica, giant venomous shrews (Solenodons) in the Dominican Republic and birds of prey in England.

All that experience impressed her peers, Professors Rolf Peterson and John Vucetich, both of whom have studied wolves for decades.

Before long, she found herself taking a helicopter to a frozen and relatively tiny 9-mile by 45-mile island in the middle of Lake Superior, the world’s largest body of freshwater. That scene was a far cry from her childhood in England.

Hoy grew up in a small farming village near the steel town of Scunthorpe in northern England.

During her undergraduate work, Hoy traveled to Ecuador to study frogs and from that point on, her career path was clearly laid out in front of her.

She earned her PhD studying how the recovery of an apex predator, northern goshawks, affected the smaller bird species that they prey on in the forests of northern England. So while wolves were relatively new to her, predator/prey relationships were not.

“I just swapped feathery things for furry things,” she joked.

While the work is similar, the politics are not.

“The main difference between my jobs is that people’s connections to goshawks and the attention they receive is very minimal compared with how people connect to wolves and have such strong views about them,” she said. “There aren’t documentaries about goshawks on the TV all the time, even though there should be because goshawks are such incredibly fast, agile and powerful predators in their own right.”

She’d never been to the United States before getting the job here.

Now five years in, it’s all turning out better than she could have hoped.

“I really enjoy the job here and living in the area. It’s really nice to be surrounded by so much wildlife and so many trees and forests” she said.

There are times, of course, when living on an isolated, remote island in the middle of Lake Superior during incredibly cold winters isn’t quite as glamorous as it sounds.

Hoy is usually one of six biologists on the island for about seven weeks. They’re the only six people on the entire island during the off-season and they all live in a small cabin with a wood burning stove for heat. Every day, someone has to trudge out to the lake and get water through a hole in the ice.

“Once you’re there, you’re there,” she said. “You have to be very prepared. We do have internet that usually works OK when the little generators are running, but you have to set your personal life off to one side. You’re in this little bubble for several weeks, but it’s a nice bubble to be in.

“I’m very lucky to get to work with this small team of experts, who are all so excellent at what they do, and who are all genuinely lovely people to spend time with.” 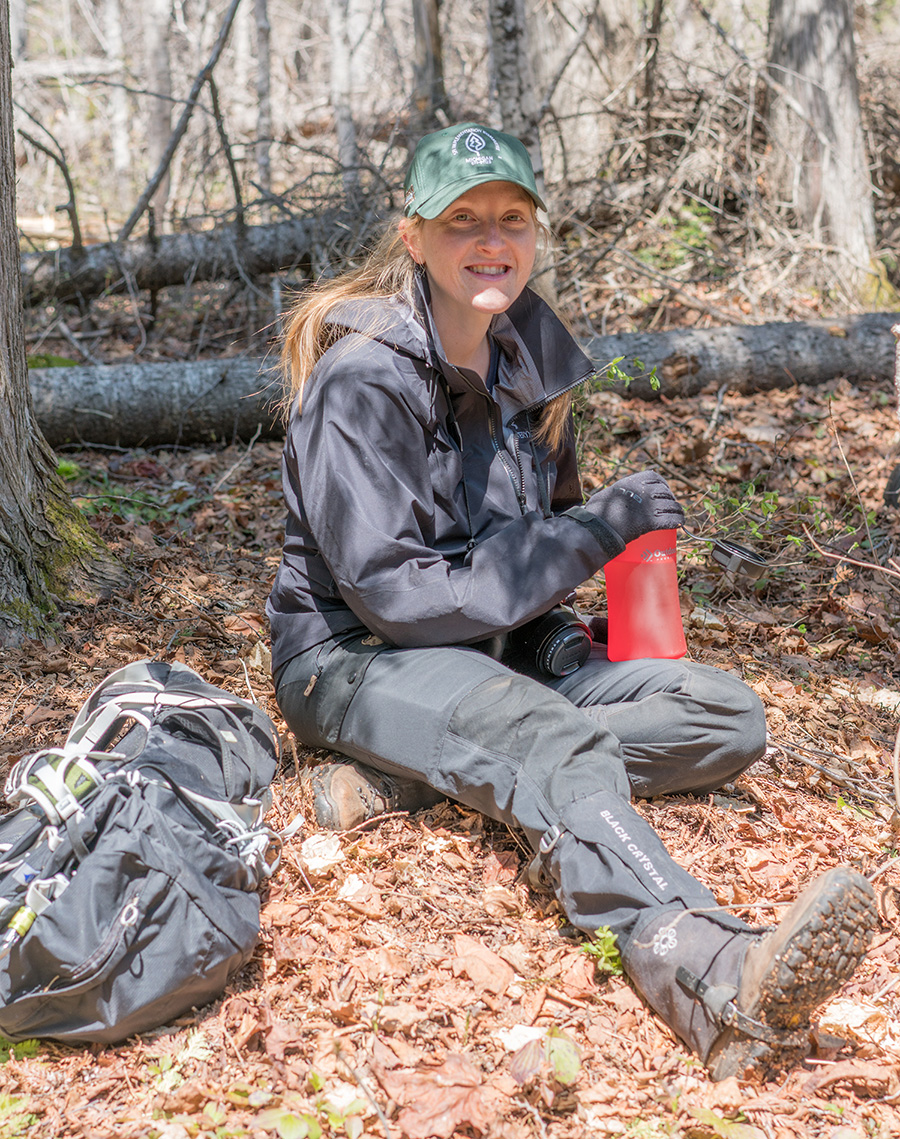 Sarah Hoy grew up in England. She’d never been to the United States before accepting a job with Michigan Technological University. 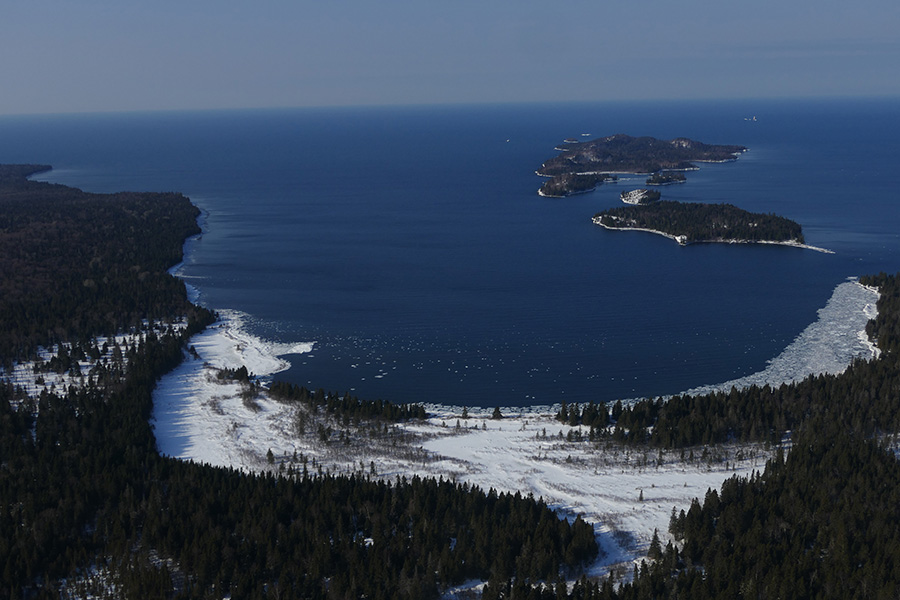 A small portion of Isle Royale is pictured here. The island is about 9.5 miles wide and 45 miles long.

This photo of a wolf resting in the snow was taken on Isle Royale by Sarah Hoy. 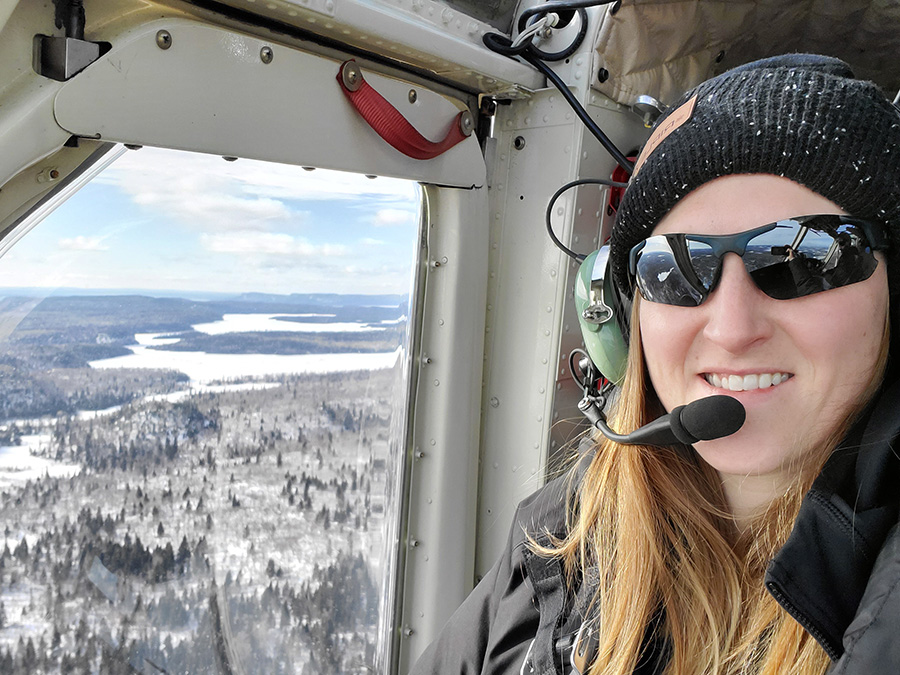 Sarah Hoy is pictured on a helicopter trip to Grand Portage, Minnesota, from Isle Royale.

Everyone pitches in, moving firewood, fetching water from the lake and helping to cook and prepare meals, Hoy said.

There are typically two field seasons on the island — winter and the spring/summer season. When Hoy is not on the island, she is analyzing data that was collected during the field season, writing papers and sometimes teaching classes.

While the study at Isle Royale has continued for more than 60 years, researchers are still learning all kinds of new things about wolves. The population dwindled to just two wolves before new wolves were translocated to the island in an effort to control the moose population there. Hoy was able to observe some fascinating behavior from some of those new wolves this year.

“Something that really surprised me this last winter was the behavior of a pair of wolves that kept swimming to and from small islands at the southwest end of the park,” she said. “We knew from the GPS collar data (provided by the National Park Service) that one of the newly introduced female wolves (originally from Michipicoten Island) had a habit of swimming to the smaller islands during the summer time. But in January/February, she started travelling with a black male wolf translocated from Wawa, Ontario.

“On six occasions during the seven-week winter field season, this pair swam to smaller islands off Isle Royale’s southwestern shore. It was incredible. It makes me shudder just to think about how it would feel to plunge my feet into the icy cold waters of lake superior in February. On one survey flight we would locate the pair as being at a point near Rainbow Cove or the North Gap, then the next day we would find them resting at the top of a south facing slope, on Washington island or St. John’s island. They would typically be bedded down in the sunshine in a small clearing or chewing on the leg bones of an old moose kill. We think that pair kept swimming to those little islands so that they could stay clear of the trio of wolves which had been aggressively defending their territory at the west end of the island.”

Among the big findings this winter was evidence of wolves breeding on Isle Royale for the first time since 2014.

“This year was very exciting,” she said. “This past winter it was a real honor and delight to see some new alliances form between the newly introduced wolves, and get to observe some of their bonding behaviour. But still the highlight for me was discovering that the first pup had been born on the island (in over five years) and getting to see it interact with its mother (who was formally the alpha female on Michipicoten island before she was relocated).”

Isle Royale has also taught Hoy a lot about how to really see things in nature. Typically, she said she’d go out hiking and chart mile after mile to see as much of the landscape as possible. At Isle Royale, it’s different.

“Isle Royale has taught me that if you really want close encounters with wildlife, the best way is to just sit very quietly and still and you’ll be surprised at all the amazing things that go on while you’re just sitting and watching,” she said. “It’s a real privilege to be on the island in the wintertime and to get a glimpse into the lives of these wolves as they settle into their new home.”