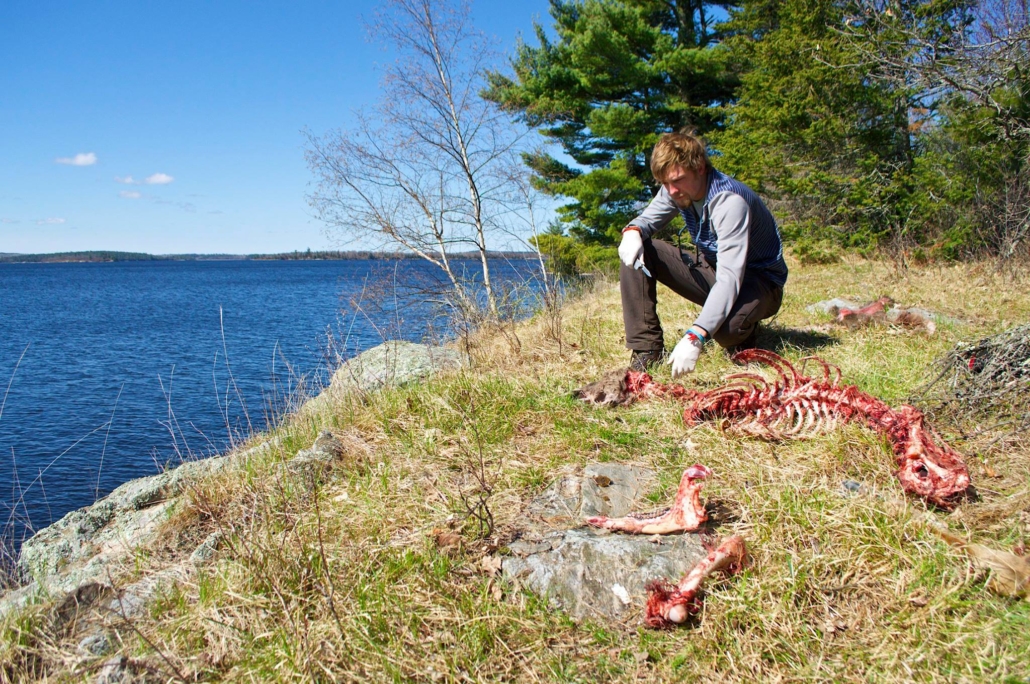 Most graduate students hope to finish their degree and then get their dream job.

Austin Homkes doesn’t fit into that group, thanks to the Voyageurs Wolf Project.

Homkes instead has a full-time job as a biologist with the project while also finishing his Master’s degree at Northern Michigan University, studying the summer ecology of wolves.

“I’ve been involved with the Voyageurs Wolf Project since its beginning,” he said. “I was fortunate enough to be able to do my Master’s work while also working on the project. It’s my dream job. A lot of people finish their graduate degree then start their careers, but I’ve been lucky enough to start both at the same time. I hope to continue what I’m doing as long as I can.” 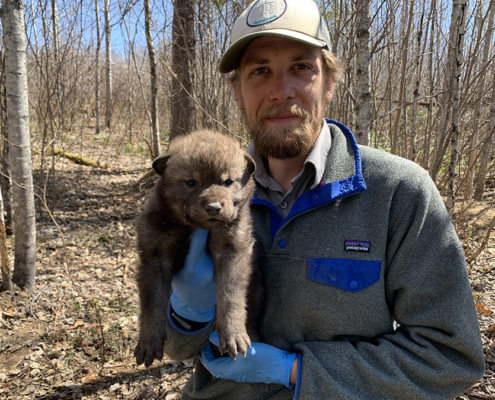 Certainly his job as a full-time wolf biologist with the Voyageurs Wolf Project would be the dream job for many graduate students. The position has him in the field from April to October where he fights bugs and humidity and swamps and, yet, he still loves it.

“When it’s July and the deer flies are lifting you off the ground, it can be brutal,” he said. “But it’s super rewarding. You step back and think, ‘This is my job. What am I complaining about?’”

Most days when there isn’t ice on the lakes, Homkes is in the field with Tom Gable, the project’s primary lead.

It’s the field work that keeps them both fulfilled and engaged.

“We started out by doing all the field work and we’ve stayed very much in the field despite running the project in different facets,” Homkes said. “Being able to study wolves and be out in the field continuously and see first-hand what wolves are doing — that’s what really excites me about the job.”

What the biologists and the seasonal volunteers have contributed since the project started just a few years ago has shed light on, among other things, what wolves eat. There’s video of wolves catching fish, comprehensive evidence on wolves eating blueberries and a wealth of information that shows how important beavers are to a wolf’s diet. All of this leaves Homkes feeling prideful.

“I’m proud of the project’s accomplishments,” he said. “Being here from the beginning and watching it take shape — I’m proud of what has been created. It’s a project that is contributing to the body of knowledge about wolves. We’ve crafted something that will hopefully continue on for a long time.”

Among the great contributions from the Voyageurs Wolf Project are countless trail cam videos showing, among other things, a female wolf rescuing a litter of pups from a den inside of a tree stump. Heavy rainfall caused the stump to start filling with water and video showed a wolf pulling out pups one by one. (Watch the video here.) Those video contributions are made possible by a network of about 100 cameras that are in the field for months at a time.

“We’ve got a huge web of cameras out at any one time,” Homkes said.

Maintaining that big network of cameras isn’t easy, but the project has actually saved money in the long run while collecting great data by using them. For example, getting an accurate count on how many wolves are in a pack is possible with cameras instead of sending a biologist into an airplane.

Homkes grew up in Holland, Michigan. He now lives in the tiny town of Ray, Minnesota, which is near the study area.

“You couldn’t find Ray if you drove through it. It’s an area more than a town,” he said with a laugh.

While it may not be the lap of luxury, he wouldn’t have it any other way.

He recently spoke to a group of undergraduate students and they asked him what he had to do in order to land such a coveted spot with such a great project. When he gets that question, he can’t help but laugh at how fortunate he was.

“I got pretty lucky,” he said. “The cards fell into place for me.”

To learn more about the Voyageurs Wolf Project, click here.