We are sorry for the lengthy delay in posting an update.   The winter of 2021-2022 had some great successes with the maturation of Rieka and her integration into the Exhibit Pack.  But, we also had some intense emotions with the loss of Grizzer and the reality of life without a Retired Pack.   As I write this, “Mother Nature” is in charge of our plans.  The wolf care team has a list of spring projects, a “Working for Wolves” program scheduled for April 30th and no sign that we will even have frost out of the ground by the Center’s May 16th summer season.  After that date, we will be open 7 days-a-week and have little time for extra projects like getting the pond running.  In addition to the snow, we only need to look at Rieka’s full winter coat to remember the season.  Rieka’s development this winter was not only physical in size, but striking in coloration of her pelage.  Pelage is the term for the two-coat system that protect wolves from the elements.  The color patterns of wolves outer coat or “Guard Hair” pelage are critical for communication within the pack.  When looking at a wolf image, notice the black lips that contrast the white muzzle.  If wolves are displaying a lip curl or threat display, certainly the contrasting lips and muzzle make that behavior more prominent.  Masking around the face and eyes (as is apparent in Rieka’s photo) helps draw focus when a direct eye stare is used by a dominant wolf.  The pale chest and belly are believed to help flag submission for the lower ranking pack member. The darker bands of courser hair on the shoulders, and rump are located in the areas where hackles can be raised, making them more apparent.  Over the last month, we have really noticed the development of Rieka’s pre-caudal tail gland. This is a passive scent gland, meaning that the individual animal does not express it, the gland merely exists and has an odor. This oily/waxy sebaceous gland mix is more likely used within the pack structure, emphasizing a wolves status when tails are held high.  You may also notice a dark tip on Rieka’s tail, which will also be more prominent when held in a high status.  As Rieka matures to a yearling, we know she will be testing limits and using her features to aid in communication and we expect to start seeing some T-1 tail postures, so far only dispayed by her arctic packmates, Axel and Grayson. 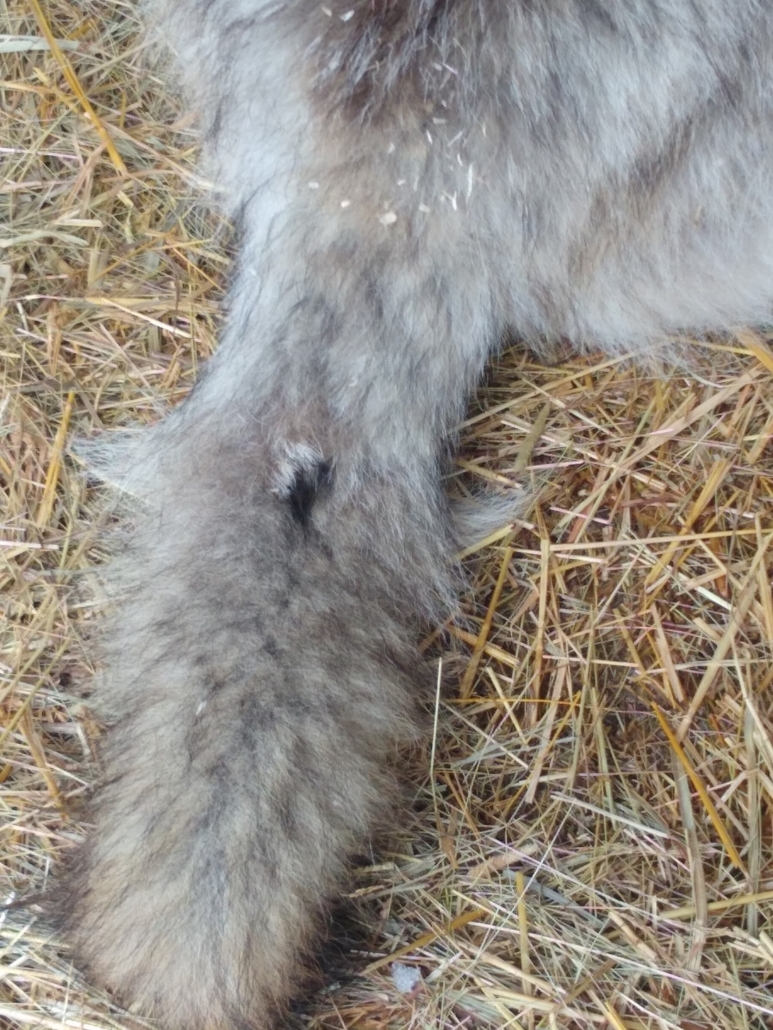 The dark spot of a pre-caudal tail gland