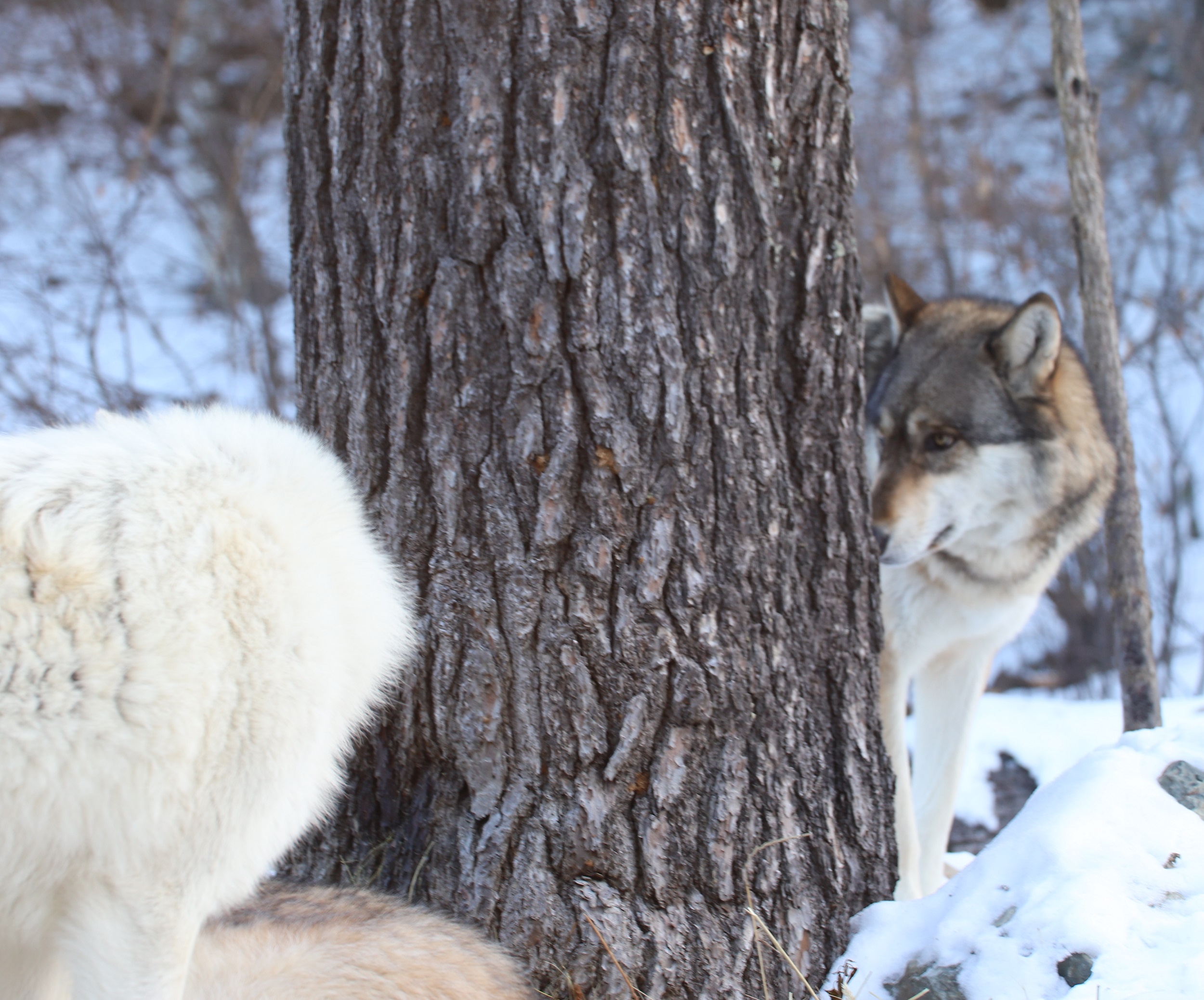 While staff were carrying Aidan on the stretcher back into the Wolf Care Center, we noticed Boltz observing from the Exhibit fence-line.   Wolves watching activity is not uncommon, the whole pack was there watching, but body postures of the individuals was interesting.  Denali was his typical, “tail wagging, what are staff up to, maybe there’s food” self.  There doesn’t seem to be much that phases that wolf , which is why he is now the oldest pack member we have managed in the Exhibit Pack in our 30-year history of wolf care.  Grayson was whining and was later observed sleeping along the retired wolf fence-line.  This also wasn’t surprising given the strong bond that existed between Grayson and Aidan (which seems to still exist today).  Axel was trying to posture over Denali and Boltz while they were focused on the wolf yard which is common for Axel.  The most interesting observation was Boltz, who was standing at the fenceline with hackles from his neck to his back and a T-2 tail posture.  This straight back tail posture tends to be more of an intense action tail posture, unlike the arousal over the back or the down low wagging of a subordinate.  A T-2 tails seems to have more of a predatory drive.  In our interpretation, Boltz, who was directly involved in Aidan’s loss of status as a pack leader, seemed to be displaying a response posture towards Aidan.  But, the behavior didn’t end after Aidan came into the building, wolf care staff sent out the following notice about a wolf check a few hours later “…Boltz was quite proactive towards the others as far as his assertiveness. Boltz began snarling and charging at Denali and Axel. Grayson had then come over to Boltz where Boltz and Grayson went back and forth for a minute or two. After Boltz continued to try and chase Denali and Axel away, Denali went back to the pump housing and laid down. After Boltz and Grayson ended their interaction of growling, snarling and charging each other, Boltz went over to the pump housing and laid down with Denali.”   When doing wolf care, it’s always important to read behaviors and trace back events that might have influenced interactions.  Aidan’s presence in such a vulnerable position may have reinforced Boltz’s confidence that he had gained when deposing Aidan as the Exhibit Pack leader.

Aidan – Been Here Before