You are here: Home1 / Arizona

Arizona at a glance

The Mexican gray wolf once roamed throughout most of Arizona, New Mexico, Texas and Mexico; however, persecution and, eventually, poisoning began shortly after European settlement. On March 29, 1998, eleven captive-reared wolves were released into the Blue Range Wolf Recovery Area. This reintroduced population is shared by Arizona and New Mexico. Main prey for wolves there are elk, deer and domestic livestock. Much controversy surrounds these wolves, due in large part to depredation (killing livestock) issues. Wolves in Arizona range in less than five percent of the map shown. Range lines are not depicted.

Current Wolf Population, Trend, Status
Number of wolves: 163 in a shared population with New Mexico (2019 story here). More than 250 are held in various captive-breeding facilities throughout the United States and Mexico.
Population trend: Varies depending on status of new releases
Legal status: Federal protection, with some exceptions 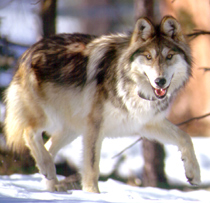