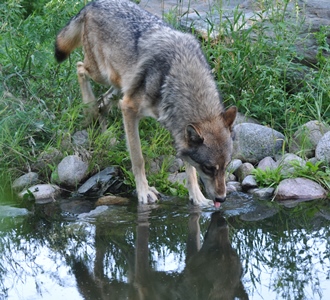 Boltz is showing much more signs of testing than in previous weeks. We’ve started to see more ride-up behaviors, lunging, T-1 Tails and jaw sparring as evidence that he wants to move up in rank. Fortunately, most of it has been directed towards Denali, with very little evidence that he will take on Aidan. We won’t intervene in rank order issues as long as there is no external stimulus that is affecting the outcome. Wolf care staff are most concerned with Boltz’s weaker social bond with humans. Of all the wolves on site, Boltz is least likely to spend social time with humans. The early whelping period in 2012 and the later acquisition age certainly influences the dynamics of the wolf exhibit as they age. Luna doesn’t have as many issues because her medical condition required constant attention and interaction with staff.