Here in the Wild Kids section you’ll find fun facts and stories about wolves and wildlands published in the International Wolf magazine and written just for kids.

Pups Growing Up
by Kyle Mrak

When wolf pups are born, they’re very weak, and they must rely on their mother and their pack mates in order to survive. The mother and other adult pack members provide the pups with food, shelter and warmth until they’re old enough to become active members of the wolf pack.

Wolves Use All Their Senses to Find Prey
by Kyle Mrak

Wolves are constantly searching their territory for their next meal. Territories can be very large—anywhere from 25 to more than 1,000 square miles in size! How are wolves supposed to find their prey in that huge area? By using their ears, noses and eyes, of course!

What are YOU looking at?
by Phoebe Hartvigsen

Many predators, including wolves, are carnivores—meaning they receive almost all of their nutrients from the prey animals they catch and eat—but some predators are omnivores, which means they get the nutrition they need from both animals and plants.

A lot has changed since spring. For the first few months of their lives, they were very dependent on the adults in the pack. They
spent most of their time in or around the den, and later, in summer rendezvous sites. These pups are now traveling within the pack territory in a nomadic lifestyle with the adults. They have also started to observe the large prey animals in their wide, new world. These pups still have some growing up to do, but soon enough they will be full-grown members of the pack.

What big teeth you have!
The teeth and jaws of adult gray wolves are well suited to their
diet and hunting methods. Over 90 percent of gray wolves’ diet
is meat, so they must hunt live prey or eat from a carcass. Adult
gray wolves have 42 teeth. Adult humans have only 32. Wolves have several types of teeth that serve different purposes while hunting or eating. These teeth include incisors, canines, carnassial and molars.

Paws and Effect:
Wolves have fantastic feet with adaptations that set them apart
from other animals in their environment. Wolves’ very large
feet help them move around confidently on harsh terrain. In
the winter those big feet even double as snowshoes, keeping them from sinking down into the snow as much as do other animals.

Canine Communication
Humans communicate in lots of different languages, both spoken and written, in order to exchange information and express feelings. We can use words to communicate with people—and even with some animals—but animals have other ways of communicating with each other. By studying wolves for many years, we have learned a lot about how they communicate with members of their own species. Wolves can use vocalizations, or sounds, to communicate feelings or situations, but they also position their body parts in ways that provide information to other wolves. This is called postural communication.

Wolf Folklore
Folklore is the word for the traditions, customs and beliefs found within a culture. Folklore is passed on by telling stories, sharing superstitions, creating music and art, and teaching by word-of-mouth. A folk tale, or story, may contain important lessons, tell a joke or reveal the moral values of the culture it came from.

What is an Ethogram? An ethogram is a catalog of animal behaviors. Here at the International Wolf Center we use an ethogram as we observe our wolves because it helps us understand the reason for each behavior, and tells us what the animals are  communicating. We see play behaviors, dominance behaviors and confidence behaviors in our wolves.

How Do Wolves Keep Warm? During winter, humans put on coats, hats, mittens and boots to go outdoors.

Hunting Prey
Wolves hunt many different kinds of prey such as ungulates, rodents and rabbits.

Ambassador Wolf Behavior: International Wolf Center visitors often ask our staff what the ambassador wolves might be thinking—especially when the wolves come up to the windows and peer inside. People assume they may be interested in food or looking for wolf care staff, but in fact, we have no way of knowing exactly what animals think or feel.

Wolf FAQ:
Do wolves eat in a certain order, and is the order based on dominance?

What is the usual eye color of wolves? Can they be blue?

Citizen Science: In our previous issue, we discussed how important citizen science is, and how kids just like you can get involved.

Citizen Science: This young man, watching our ambassador wolves in their enclosure, is demonstrating observation, a first step in practicing citizen science!

Ambassador Wolf Behaviors: Jaw sparring is a common wolf behavior in which two wolves jockey for position over each other with open mouths, often accompanied by snarling or growling.

Notes from the Field: “Dispersal” is a word often used when discussing wild wolves. It comes from the word “disperse,” which means to scatter, distribute or spread over a wide area.

Ambassador Wolf Behaviors: Snowplows and face wipes are two common winter behaviors you might see in our ambassador wolves here at the International Wolf Center.

Notes from the Field: As nights start getting crisper and aspen trees turn gold, beavers begin preparing to live all winter beneath the ice.

Activity: Which wolf gets dinner? Can you guess which wolf finds the prey? Follow the lines to see if you’re right!

Notes from the Field: We got Axel and Grayson from Canada when they were very young. They came from a litter of four, so they are brothers.

Meet the Pack: The “old man” of our Exhibit pack is Grizzer. He is 12 years old, which is old for a wolf, and he was born on May 5, 2004. Grizzer is a Great Plains subspecies of the gray wolf.

Meet the Pack: Boltz came to the International Wolf Center in 2012 when he and Luna were very young pups.

Notes from the Field: Winter is the easiest time for wolf tracking because in snow, the signs, including tracks, scent posts and scat are more visible.

Meet the Pack: Ambassador wolf Luna is a Great Plains subspecies of the Gray wolf. Three-and-a-half years old, she is the only female in the exhibit pack at the interpretive center in Ely, Minnesota.

Notes from the Field: Wolves in the wild in this area are born in late April or early May. During the late summer and early fall, the pups live with the pack in an area called a rendezvous site.

Meet the Pack: Denali is a Rocky Mountain subspecies of the gray wolf (Canis lupus occidentalis). He is the largest member of the Exhibit Pack at the International Wolf Center, weighing approximately 135 pounds. 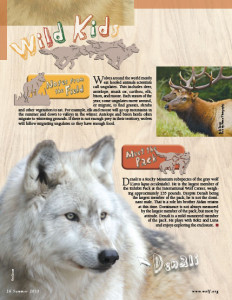 Meet the Pack: Aidan turned seven years old earlier this year. He continues to be the dominant male in the pack. 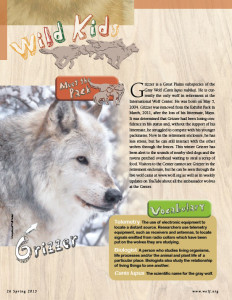 Notes from the Field: Winter is a great time for scientists to track and study wolves, because wolves are easily seen against the white winter snow, especially from an airplane.

Meet the Pack: Grizzer is a Great Plains subspecies of the Gray Wolf (Canis lupus nubilus). He is currently the only wolf in retirement at the International Wolf Center.

Learn With Wild Kids
When Jacob Tespa, age 12, visited the International Wolf Center for a Wolf Watch program this past summer, he had a chance to learn and practice what biologists do.

What Inspires You? Wolves often provide inspiration. Being inspired means that something or someone has influenced you in a way that makes you want makes you want to take action.

Meet the Pack: Luna came to the International Wolf Center in 2012. She is a Great Plains subspecies of Canis lupus, the gray wolf. Luna is the only female in the Center’s Exhibit Pack.

Notes from the Field: Have you ever gone for a hike and found signs that an animal had been there? Animal signs are little clues that show us that animals live in the area. These signs can be as diverse as holes, scaly skin, bones and nests.

Meet the Pack: Aidan was born on April 27, 2008, and since then has been part of the International Wolf Center’s Exhibit Pack with his littermate Denali.

Birthday Girl Raises Money for Wolves
It’s not every day that a 10-year-old foregoes birthday presents, raises money to support wolves and convinces her parents to travel more than 2,000 miles to deliver the donation in person.