By David Frey, The Wildlife Society

Red wolves haven’t roamed the marshes of southwestern Louisiana for 40 years, but their genetic “ghosts” remain there in the DNA of coyotes whose ancestors mated with them, researchers say. The scientists believe those genetics could help bring the wolves back from the brink of extinction and the region could prove an ideal site to return red wolves to the wild.

After trapping, collaring and sampling Louisiana coyotes (Canis latrans) for their DNA, researchers found many of them retained genetics of red wolf (Canis rufus) ancestors. In some areas, almost two-thirds of the coyotes had red wolf DNA—some as high as 69%. 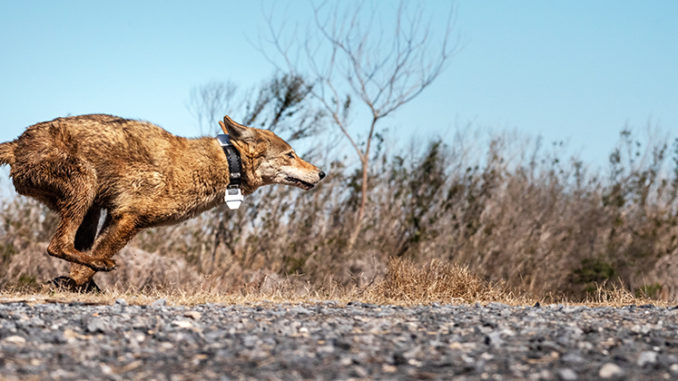 “The question is, when does it go from being a coyote to being a red wolf?” said Bridgett vonHoldt, an associate professor in ecology and evolutionary biology at Princeton and lead author on the new study published in Science Advances.

The research also confirmed what locals and managers had long speculated—coyotes with wolf ancestry tended to be larger than other coyotes. Now the team hopes to find how else what else makes them unique.

Federally listed as endangered, only about 20 red wolves are believed to exist in the wild at release sites on North Carolina’s Albemarle Peninsula. Their reintroduction has been stymied by poaching and accidental shootings by hunters who mistake the small, reddish wolves for coyotes. Another 241 are held in captivity as part of a breeding program, but scientists worry about inbreeding in the small population, which is descended from wolves removed from southwestern Louisiana and East Texas.

Managers removed the last known wolves from their range in 1980, but tales of sightings have continued. Previous studies using scat found that 55% of coyotes had at least 10% red wolf ancestry. One sample showed as much as 100% red wolf ancestry. The latest study builds on that research. By trapping and collaring hybrids, researchers hope to gather more data on their measurements, movements, diet, habitat use and other factors that could show how these animals differ from other coyotes in the region.

“They’re really exciting next steps of the project,” said TWS member Kristin Brzeski, an author of this study and of past red wolf genetic research, “growing it to better understand why red wolf ancestry has persisted, what facilitated it and what does that mean for these animals on the ground.”

The latest study found so-called “ghost alleles” in 31 trapped coyotes. Their wolf ancestry was particularly well preserved in the isolated wetlands and prairies of Cameron Parish, Louisiana, on a private wildlife preserve and surrounding public lands, none of which allow coyote hunting.

Researchers believe this absence of hunting persecution may have allowed the region to serve as a reservoir for red wolf genetics long after the wolves were gone and to provide a refuge for hybridized coyotes, which may be more skittish around people than typical coyotes.

“The few times I’ve interacted in enclosures with a red wolf it’s been incredibly difficult to see them because they want nothing to do with us,” vonHoldt said.

They study also points to the conservation value that hybrid species can sometimes play. Often, hybrids are seen as a threat to maintaining the genetic uniqueness of endangered species. “But in certain places, they can be a way to get important genetic variation and help the species,” Brzeski said. “In our case, they have retained genetic variation that might be really important for the endangered species again.”

The researchers hope this variation can be used to aid the red wolf captive breeding program—maybe through cross breeding or cloning or other emerging genetic technologies, or maybe through a kind of reverse hybridization process, which is being used to try to restore the extinct Floreana giant tortoise (Chelonoidis niger) to the Galapagos.

“I don’t really know what the tangible future looks like, but I do think we’re in a position to know that creative things could be done in the next couple years or the next decade,” vonHoldt said. If the genetics aren’t preserved, she said, “we could really lose out on the opportunity.”

The study also suggests southwestern Louisiana be considered as a possible reintroduction site for red wolves. Until a few decades ago, red wolves roamed the region’s marshes and beaches, and it’s here that their “ghost genomes” remain.

“This is where they came from,” Brzeski said. “The red wolves we have today are adapted to that landscape. They were trapped and removed from where we’re trapping now. You could argue it’s a logical next step to put the animals back there.”

David Frey is managing editor at The Wildlife Society. Contact him at dfrey@wildlife.org with any questions or comments about his article. Read more of David’s articles here.