Never Cry Wolf: Was it a work of fiction or non-fiction?

You are here: Home1 / Wolf Info2 / Wolf News3 / Original articles4 / Never Cry Wolf: Was it a work of fiction or non-fiction?

Farley Mowat’s popular book and the subsequent Disney movie, Never Cry Wolf, should be considered entertaining works of fiction. They are not true accounts as suggested by the author.

When Farley Mowat published his 1963 book, Never Cry Wolf, it was heralded by environmentalists from his native Canada all the way to the Soviet Union. His real-life account of wolf behavior in Canada seemed to shed new light on their prey, their behavior and their role in an ecosystem.

But was it actually a true story as he proclaimed?

The answer is no.

“I firmly believe the book should be considered a work of fiction,” said Dr. L. David Mech, a longtime wolf biologist and founder of the International Wolf Center. “There’s far too much evidence, including Mowat’s own journals, to suggest otherwise.”

Mowat claimed, for example, that wolves lived mainly off small rodents, such as mice, and not hoofed animals. That is not true. To this day, Mech hears from people who think this is fact.

“The mistakes Mowat made are still being spread as fact by members of the public,” Mech said. “It is clear that his book ended up adding to the trove of wolf misinformation that is prevalent across the world. For example, after a talk, I have often been asked by audience members about wolves eating mainly mice.”

In a review of Never Cry Wolf, published by The Canadian Field Naturalist in 1964, countless details are called into question by Mowat’s supervisor, A.W.F. Banfield. The review concludes with this strongly worded paragraph: “Much of the book consists of a fascinating embellishment of Mowat’s observations on the home life of a wolf pack. It is certain that not since Little Red Riding Hood has a story been written that will influence the attitude of so many towards these animals. I hope that the readers of Never Cry Wolf will realize that both stories have about the same factual content.” (The entire review can be found by clicking here.)

Later, in 1996, Saturday Night magazine published a story called “A Real Whopper” that further called into question the facts of Never Cry Wolf. That story was written by John Goddard.

“By selling fiction as nonfiction, (Mowat) has broken a trust with his readers,” Goddard wrote.

Goddard studied Mowat’s own notes for the story and came to several significant conclusions. Among them: “Documents recently made public at the National Archives of Canada, and papers that the author himself sold years ago to McMaster University, show that Mowat did not spend two years in the Keewatin District in 1947 and 1948 as the books say. He spent two summer field seasons in the district — totaling less than six months — and mostly in a more southern part of the district than he describes. He did not casually drop in alone but traveled on both occasions as a junior member of well-planned scientific expeditions. He did not once — contrary to the impression he leaves — see a starving Inuit person. He did not once set foot in an Inuit camp. As for the authenticity of his wolf story, he virtually abandoned his wolf-den observations after less than four weeks.”

Mowat addressed the controversy in a 2012 interview with the Toronto Star.

The stench of Saturday Night magazine’s 1996 exposé, A Real Whopper, is still in the air at the Mowat home in Port Hope.

“For years I felt the Toronto media were out to bury me alive,” he said of latter-day efforts in the literary community to re-assess his work according to journalistic standards of accuracy and truth.

“That was never my game,” he said. “I took some pride in having it known that I never let facts get in the way of a good story. I was writing subjective non-fiction all along.”

Mowat’s books were translated into 52 languages and sold more than 17 million copies around the world, according to his 2014 obituary, and Never Cry Wolf was adapted for a 1983 Disney movie by the same name.

While the book is falsely labeled as a true story, Never Cry Wolf did have an impact on society’s perception of wolves. Mowat’s book did raise awareness about wolves and did help people see wolves as something more than ruthless predators that needed to be removed from the landscape.

“The book is a great read, and the Hollywood movie made from it is also very entertaining,” Mech said. “Mowat was a great writer, but rather than admitting he was writing fiction, he pretended it was not, which made him more of a charlatan than a great fiction writer.” 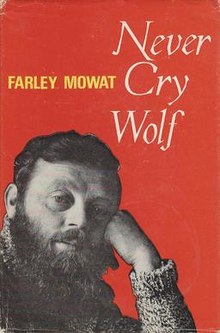 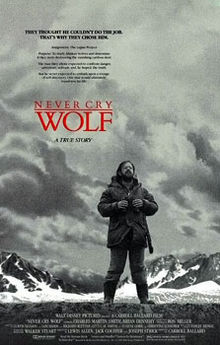 Top: A trailer for the movie

Middle: A cover of the book Never Cry Wolf