One of the most popular ambassador wolves we’ve ever had at the International Wolf Center was named Luna. She came to the Center in 2012 and stood out from the rest of the wolves due in large part to her unique color.

She had a black coat. Visitors to the Center often asked how common her coat color was and what caused the variation.

This post aims to answer those basic questions and dig a little deeper into the science behind this color variation.

Note: First, let us get one confusing aspect to this out of the way. Even black wolves are still considered to be a gray wolf species (Canis lupus). There are black-colored gray wolves and gray-colored gray wolves (along with white, brown and several other variations).

How many wolves have black coats?

It’s not easy to give a definitive answer on this as it varies by region.

In Yellowstone National Park, though, it’s a much different story. About half of the wolves there are black. The ancestors of these wolves were moved there from Canada, where black wolves are more common. 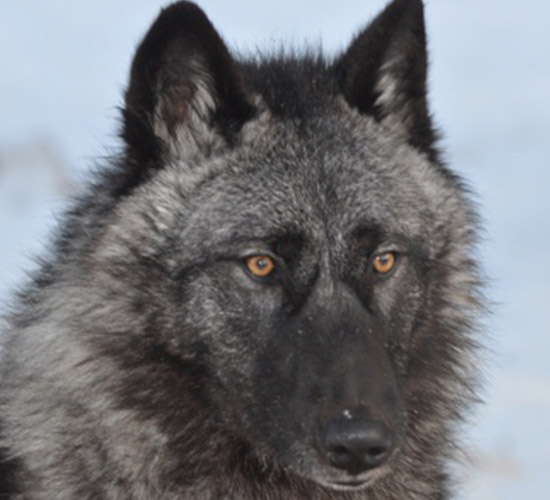 How else are they different?

There are several differences between gray wolves and black wolves that scientists have uncovered.

Why are some wolves black?

“The presence of black coats was due to a single gene (a beta defensin gene termed CBD103 or the K-locus), with all black coated individuals carrying a mutation linked to this coat color – a mutation believed to have originated in domestic dogs of the Old World. The origin of the K-locus in wolves likely came from hybridization between dogs and wolves in northwest North America within the last 7,000 years as early humans brought domestic dogs across the Bering Land Bridge.”

Why are black wolves rare?

A 2013 research paper on this topic by Daniel Stahler, Daniel MacNulty, Robert Wayne, Bridgett vonHoldt and Douglas Smith titled “The adaptive value of morphological, behavioural and life-history traits in reproductive female wolves” found that black-colored females had 25 percent fewer surviving pups than grey-colored females, “which likely contributed to the maintenance of coat colour polymorphism in this system.”

That is to say, since fewer pups from black wolves survive, it stands to reason that there’d be fewer to reproduce and pass along the gene.

It does appear as though black wolves are more common in places like Minnesota now than they used to be.

Mech wrote a paper in 2009 that explains this, in part, titled “What is the taxonomic identity of Minnesota wolves?”

A key finding from that paper is that black wolves appear to be relative newcomers to Minnesota. When Milt Stenlund shared his research in 1955, he made no mention of black wolves in the Superior National Forest during 1948-52. Stenlund observed 318 wolves during that time period.

Three conservation officers who aerially hunted or trapped wolves before 1960 in the same area indicated that “out of 580 wolves taken, only four were black,” which is less than one percent.

“Wholesale persecution of the wolf in Minnesota ended in 1965 with the repeal of the bounty on wolves, so wolves began proliferating in the state, no doubt some immigrating from Canada to the north. By 1967-69, incidence of black wolves in the same area had increased to 3.6 percent.”

Statewide, Minnesota’s percentage of black wolves is now estimated at 1.5 to 2 percent.

As always, we thank the many hard-working wildlife biologists whose research makes articles like this one possible.

See below for full citations and links to the full papers: