Earlier this afternoon, we received an update from Isle Royale National Park on how the wolves recently moved there are doing.
Here’s what we know:
• The seven wolves moved to Isle Royale on the weekend of March 23 are all moving around and apparently doing well – each is showing large movements around the island. 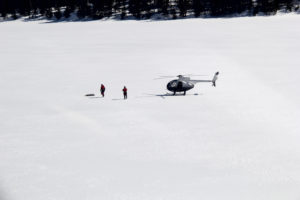 This photo was taken by Ashley McLaren of the OMNRF

• A female wolf that was moved to the island last fall appears to be traveling with 007, the first Michipicoten male that was moved in February.
• The breeding male from Michipicoten (009), moved March 1, is spending the bulk of his time on the west end of the island. Prior to the March 23 translocation, he was primarily on the east end of the island.
• The black wolf known as 016, moved from the Canadian mainland on March 23, has circumnavigated the island in his first week there.

We will continue to share these updates with you when possible.