You are here: Home1 / Wyoming

Wyoming at a glance

Gray wolves once existed throughout Wyoming; however, persecution and, eventually, poisoning began shortly after European settlement. Wolves were reintroduced into Yellowstone National Park in 1995 and 1996 in an effort to facilitate gray wolf recovery in the Northern Rockies states, and have since thrived and expanded within and outside of the park. Wolves continue to be controversial, and public attitudes vary.

According to the U.S. Fish and Wildlife Service, the most recent official minimum population estimate shows that the Northern Rocky Mountain wolf population contains more than 1,774 adult wolves and more than 109 breeding pairs. Most of the suitable habitat across the Northern Rocky Mountain region is now occupied and likely at, or above, long-term carrying capacity. This population has exceeded recovery goals for 10 consecutive years. 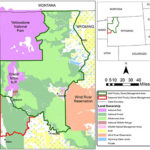 This is a map showing the boundaries of the Trophy Game Management Area set in Wyoming state law.

Wolf range is approximately 20 percent of the map shown, with most wolves occupying the northwestern portion of the state. Range lines are not depicted. Main prey for wolves there are elk, moose, deer, bighorn sheep, mountain goats and beaver.

Wyoming allows regulated taking of wolves (quotas, seasons, etc.) in a Trophy Zone in the NW part of the state (see map).  That is where most of Wyoming’s wolves live.  Some wolves continually try to recolonize outside that zone.  However that area is dominated by livestock grazing so wolves are heavily controlled for depredating on livestock, and state managers allow unregulated public taking there. 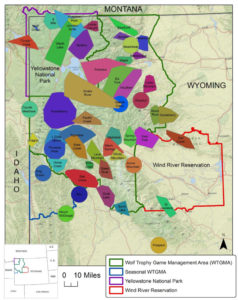 Current Wolf Population, Trend, Status
Number of wolves: At least 311 in 2019, according to this report.
Population trend: Stable
Legal status: Managed by the state of Wyoming (except for wolves within Yellowstone National Park and Wind River Reservation)