You are here: Home1 / Washington

Washington at a glance 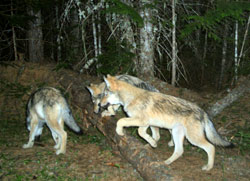 Gray wolves once existed throughout Washington; however, removal began shortly after European settlement. They were extirpated (removed) from Washington by the 1930’s through human persecution, with the exception of a few individuals dispersing periodically into the state since then. In the summer of 2008, a breeding pair of wolves was radio-collared in western Okanogan County in north-central Washington. The Okanogan County wolves were determined through genetic testing to be consistent with coastal British Columbia populations. Known packs are now inhabiting the northeastern quarter of Washington with wolves moving into central and southeastern regions. Wolves continue to be controversial, and public attitudes vary. Main prey for wolves there are elk, moose and deer.

For more about wolves in Washington, visit the state’s Department of Fish and Wildlife website.

Current Wolf Population, Trend, Status
Number of gray wolves: A minimum of 108, as estimated by the Washington Department of Fish and Wildlife in 2019.
Population trend: Increasing 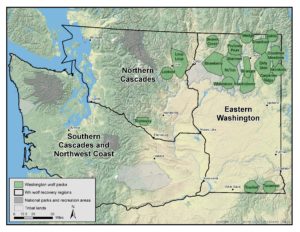 Wolf packs in Washington as of December 2016. Map courtesy of the Washington Department of Fish and Wildlife.

Legal status: State and tribal management in the eastern third of the state as of May 5, 2011. Federally protected in all other areas. The reason for the difference in management is addressed in a FWS document, which reads: Gray wolves in Washington acquired federal protections under the Endangered Species Act (ESA) in 1973. When the U.S. Fish and Wildlife Service (USFWS) completed the Northern Rocky Mountain (NRM) Wolf Recovery Plan in 1987, only the states of Idaho, Montana, and Wyoming were included.

In 2011, President Obama signed the Department of Defense and Full-Year Appropriations Act, 2011; a rider in that bill directed the Secretary of the Interior to reissue the 2009 delisting rule. As a result, wolves in the NRM DPS (with the exception of Wyoming), including the eastern third of Washington were once again removed from ESA protections.

Wolves are managed in Washington state by more than one entity. The USFWS is the primary agency responsible for managing wolves west of U.S Highway 97, State Route 17 and U.S. 395, while the Washington Department of Fish and Wildlife (WDFW) has primary management authority to the east of that line. Wolves that inhabit tribal lands east of highways 97, 17 and 395 are managed by those specific tribal entities. For more information, see this website.