You are here: Home1 / Germany

Germany at a glance 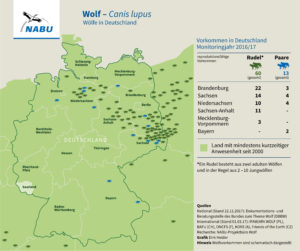 Main prey for wolves here are wild ungulates. Wolf range is minimal in Germany and generally confined to the east. They returned to Germany in about the year 2000.

The website nabu.de wrote this summary of the wolf in Germany: Wolves have been living in Germany’s wilderness for over 15 years. What was celebrated as a sensation at the beginning of the millennium has become a normality in many places. … Wolf families live in the eastern parts of Germany – residents, livestock farmers and tourists have adapted to their new neighbors. The road to this coexistence was anything but conflict-free. The NABU has accompanied the return of the wolves from the beginning – and one thing became clear: The question of whether wolves permanently return to Germany, is not a question of biology and ecology. Rather, it’s about whether we humans want to permanently give the wolf a chance in this country and get involved in living together.