You are here: Home1 / Croatia

Croatia at a glance

Wolf populations in Croatia began to slowly increase in the early 1990s as the country began a battle for independence from Yugoslavia. Wolves currently inhabit 17,468 square kilometers of continental Croatia. The wolves here intermingle with those from neighboring Slovenia, Bosnia and Herzegovina. Main prey for wolves here are ungulates and domestic livestock. 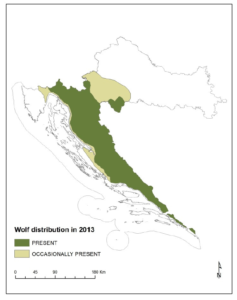 This map depicts the range line of wolves in Croatia in 2013 and was prepared for the State Institute for Nature Protection.

In 2014, this report was given on the state of the wolf population on Croatia. It was prepared for the State Institute for Nature Protection. The report reads, in part:  “The wolf population in Croatia is part of the larger Dinaric/Balkan population that inhabits the territories of Slovenia, Croatia and Bosnia-Herzegovina, and continues to the south of the Dinarides mountain range. This entire population is estimated to contain approximately 3900 wolves, and has been predominantly stable over the past six years (Kaczensky et al., 2013). In Croatia, the wolf is permanently present throughout the Dinarides, from the border with Slovenia to the border with Montenegro. According to the distribution map from 2013 (Figure 1), the wolf in Croatia is permanently present in 18,213 km2 and occasionally present in an additional 6,072 km2 of territory. The distribution of the Croatian wolf population is distributed over nine counties: Sisak-Moslavina, Karlovac, Lika-Senj, Primorje-Gorski Kotar, Istria, Zadar, Šibenik-Knin, Split-Dalmatia and Dubrovnik-Neretva. There were no changes in the distribution range in 2014 as compared to 2013.

Current Wolf Population, Trend, Status
Number of wolves: Between 136 and 199. The last Croatian population report available is from 2014. A link to that report is here.