You are here: Home1 / Ethiopia

Ethiopia at a Glance

New research is suggesting that an Ethiopian canid once thought to be a jackal may actually be a new species of wolf – the Ethiopian wolf. See news link below for more details.

Questions over Canis simensis’ taxonomy had led to a variety of names for this African canid such as Abyssinian wolf, Simien fox, Simien jackal, Ethiopian jackal, red fox, red jackal, Abyssinian dog and cuberow. Its lineage connects it to modern gray wolves through mitochonrdrial DNA showing these animals to be more closely related to gray wolves and coyotes than to any African canids.

Disease continues to be the most immediate threat to the survival of Ethiopian wolves. The use of an oral rabies vaccine may provide the most realistic, cost-effective and non-invasive approach to effectively protect the wolf population against this lethal virus. A joint meeting by the Ethiopian Wildlife Conservation Authority, the International Union for Conservation of Nature (IUCN) Species Survival Commission (SSC) Canid Specialist Group and the Ethiopian Wolf Conservation Programme resulted in a Strategic Plan for Ethiopian Wolf Conservation to address this and other issues related to the survival of this species.

They are long-limbed, slender canids. They have a black, bushy tail that can reach up to 40 centimeters in length, pointed ears, and a slender snout. They are tawny red with a white underbelly and blaze on their chests, and also have white fur on their throats, which sweeps up and covers the underside of their muzzle. The female wolves tend to be paler in color than males and are smaller overall. 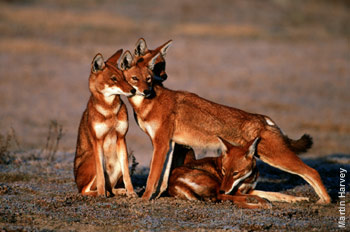 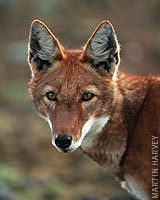 The Ethiopian wolf (C. simensis), once thought to be closely related to the jackal, is actually more closely related to the gray wolf and coyote than any African canid. This conclusion was reached through phylogenetic analysis using mitochondrial DNA sequencing. It is thought that this species evolved from a gray wolf-like ancestor that crossed Eurasia to northern Africa as recently as 100,000 years ago.

This medium sized canid has a reddish coat, distinctive white markings throughout the body and black markings on the tail, long legs and an elongated muzzle. The contrast of white markings against the red coat increases with age and social rank in both sexes. Males are significantly larger (20%) than females with an average weight of 16.2 kg (14.2 – 19.3 kg) females weigh an average of 12.8 kg (11.2 – 14.15 kg).

Over half of the species’ population live in the Bale Mountains where two core areas for recovery are located: the Web Valley and the Sanetti Plateau.

The habitat of these wolves is confined to Afro-alpine grasslands and heathlands at about 3,200m-4,500m where they prey on Afroalpine rodents. Subsistence agriculture reaches up to 3,500-3,800m in many areas and often restricts wolves to higher ranges. A pronounced dry season goes from December to February/March.

Depredation is an issue with the Ethiopian wolf as it is with other wolf species.  However, Ethiopian wolves present a lesser danger compared to hyenas and jackals with the occurrence of livestock remains in wolf scat uncommon across the highlands.

Social interactions and communication between Ethiopian wolves is similar to other wolf species with an average pack size of 3-13 individuals. However, males rarely disperse and are instead recruited into multi-male philopatric packs. Sexually mature females are the main dispersers and have strictly limited movements for lack of habitat. These females look for openings in packs, often packs with deceased breeding females. Average pack territory is 6.0-13.2 square km with some overlapping ranges. Females may accept courting from males within the pack or neighboring packs. Preference is shown to the dominant male in the pack although, studies have found that 70% of matings involved males from outside the pack. Breeding season is usually anytime from August through November. During breeding and pregnancy, the female’s coat changes to pale yellow and becomes woolly while the tail turns brownish and loses hair. Two to seven young are born in October through January, blind and deaf with a charcoal gray natal coat that has a buff patch in the chest and groin areas. Full, adult appearance is reached at two years as is sexual maturity. Life span in the wild is approximately eight to ten years.

Natural causes of mortality include predation of young by spotted hyenas or raptors, starvation in juveniles occurring more frequently with females, pathogens and parasites such as rabies which is the main cause in Bale, and human causes.

The Ethiopian wolf is considered a critically rare canid and one of the rarest African carnivores. Population decline is a result of many factors: continuous loss of habitat due to agriculture (sustinence farming and overgrazing), traffic incidents and shootings, hybridization with domestic dogs, and disease. The Ethiopian wolf receives full official protection under Ethiopia’s Wildlife Conservation Regulations of 1974, Schedule VI. Killing of a wolf carries a sentence of up to two years imprisonment.

Conservation efforts include vaccination of both domestic dogs and wild wolves from rabies, sterilization of domestic dogs and hybrids, funding patrolling and maintenance of recovery areas, surveys and monitoring of populations, workshops to educate about Ethiopian wolves, the Bale Mountains Research Project begun in 1983, and the establishment of the Ethiopian Wolf Conservation Programme (EWCP) in 1995. There are no Ethiopian wolves in captivity.

*(of an animal or species) tending to return to or remain near a particular site or area.