You are here: Home1 / Wolf Info2 / Facts vs Fiction3 / The Indian wolf

At this time of year, the grasses are yellowing and becoming brittle, giving the landscape a golden hue. Sitting in a stilted green hut with my field assistant, I watch for any abrupt rustling or movement in the grass. Two centuries ago, these grasses could be hiding Asiatic lions or even cheetahs, but today, they harbor one of the last surviving large predators of the South Asian grasslands—the Indian wolf.

On this early morning in 2015, my field assistant and I had been waiting patiently for Indian wolves. Finding and observing these wolves can be quite challenging, since they’re rare and well camouflaged. Unlike its North American cousins, the Indian wolf is small, has short hair and commonly has a brownish hue—all adaptations for survival in such a dry landscape. 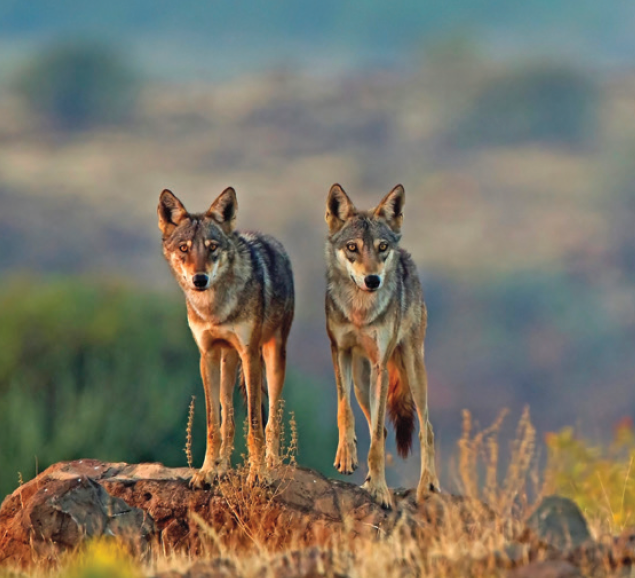 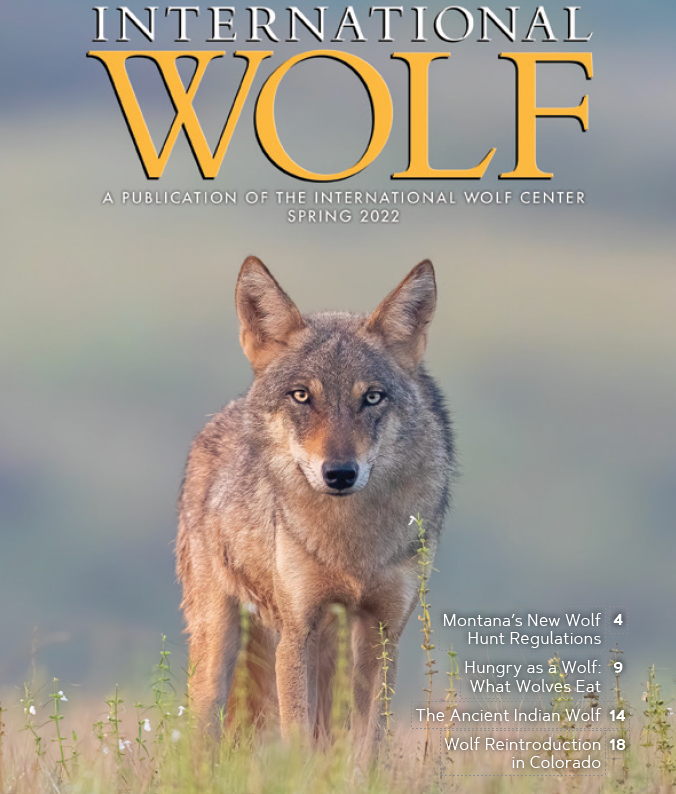 The magazine is mailed exclusively to members of the Center.

Also unlike its North American cousins, the Indian wolf was relatively unknown to us at that time; we didn’t even know how it was related to other gray wolves. In fact, the evolutionary history of the Indian wolf has long remained a scientific mystery.

Over the course of weeks, our team did manage to find and observe these wolves. We even found dens with their pups laid hidden in small, rocky outcrops surrounded by villages. But I often wondered about their past: How long had the Indian wolf roamed this arid Central Indian landscape? And how were they related to other gray wolves in the world?

A story written in the genes

Gray wolves are remarkable animals; they live in almost every type of environment, and they are ancestors to the dogs living in our homes today. But what’s the story behind this wide spread animal? How do Indian wolves fit into that story? Luckily, much of the tale has been preserved in the gray wolf’s DNA. Scientists can sequence the DNA of animals and use the resulting patterns to reveal the story of that animal’s evolutionary history.

There are early indications that Indian wolves may play an interesting part in the gray wolf’s story. Based solely on mitochondrial DNA, all gray wolves that inhabit the Holarctic, which contains North America and Northern Eurasia, share relatively recent origins. A study in 2003 was the first to suggest that Indian and Tibetan wolves may be the two most evolutionarily distant branches of the gray wolf tree. However, this evidence was based on information from mitochondria, a small region of DNA inherited only from the mother. To gain a full picture of the evolutionary history of Indian wolves, scientists needed to sequence their nuclear genome.

Oldest branch on the wolf tree

One cold December, a team of biologists from the Wildlife Institute of India and The Grasslands Trust worked around the clock to capture a wild Indian wolf in Maharashtra. As demonstrated by their ability to survive in human dominated landscapes, these wolves are quick witted and extremely clever—making their capture very challenging. The goal was to place a collar with a tracking device on each captured animal to study the movement of Indian wolves across their grassland habitats. While on a routine walk to check the foot pad trap, a team member heard rustling, and walking quickly toward the noise, found an Indian wolf in the trap. With the utmost care, this wolf was equipped with a GPS collar to record its daily movements across the landscape. At the same time, the team member took a blood sample to study the species’ deep history through sequencing the genome (the animal’s complete DNA). This blood sample was part of a larger project to sequence for the first time the genomes of wild Indian wolves and investigate where they fit on the gray wolf’s family tree. Using 31 other whole genomes from various gray wolves and other wolf-like species, our comparison to Indian wolf genomes revealed surprising twists in the gray wolf story. Remarkably, the study revealed that the Indian wolf found in the Indian sub-continent is the oldest branch on the gray wolf tree. Our findings suggest that, rather than being more recent newcomers to the Indian subcontinent, Indian wolves have a long history in the Indian ecosystem. Fossil evidence also points to gray wolves having inhabited southern and western Asia during the height of the ice age glaciations. The Indian subcontinent served as a refuge for various species during the
ice ages, and our results imply that Indian wolves also resided here—and diverged into an evolutionarily distinct line. This is in contrast to the way Indian wolves are currently classified. Wolves that inhabit an area ranging from India to Turkey are considered as the same population. Our findings indicate that the distribution of this ancient wolf lineage is much smaller, and potentially restricted to India and Pakistan. Today, this makes the Indian wolf the world’s most endangered and evolutionarily distinct gray wolf population.

In Rudyard Kipling’s Jungle Book, a pack of Indian wolves adopt a small boy named Mowgli and teach him how to survive in the jungles of India. This Indian wolf pack becomes Mowgli’s family; the wolves nurture and protect this small boy from the dangers of the world. Now, the Indian wolf faces many dangers without the strong support of its human friends.

While the big cats of India receive worldwide attention and strong conservation efforts, Indian wolves and their grassland habitats are largely over-looked. In India, the last population estimate of Indian wolves was almost 20 years ago and put the number at 2,000 to 3,000 individuals. In the decade from 2005 to 2015, India is estimated to have lost 31 percent of its grassland habitat. Indian wolves are reported to have declined in areas once a strong-hold for them, such as the Saurashtra region of Gujarat—which means there are probably more tigers than there are Indian wolves in India currently. The situation is not looking good in Pakistan either, where no reliable estimate exists for the Indian wolf population. Conservationists in Pakistan agree that Indian wolves are declining and becoming increasingly rare in Sindh and Punjab. Finding that Indian wolves are an ancient lineage puts a needed spotlight on this special animal. With the evolutionarily distinct Indian wolf found only in India and Pakistan, our study urgently calls for a reassessment of its taxonomy to reflect its uniqueness. Taxonomic changes regarding the Indian wolf will significantly raise its conservation priority, which will strengthen current on-the-ground efforts to protect it. With less than 7% of India’s grasslands protected, this highly endangered wolf is mostly found outside protected areas in India. Just as the tiger is a flagship species for forests, the Indian wolf can serve as a flagship species for conserving India’s remaining grassland ecosystems.

When I think about Indian wolves, I think back to those field days in 2015 in Maharashtra, seeing Indian wolf puppies clumsily trotting and playing while being carefully watched by their mothers. Indian wolf families are tenderly caring for their young, just as they have done for thousands of years in these grasslands—but now with much greater challenges. This next generation of Indian wolves is being raised with the threat of diseases transmitted by feral dogs and the uncertainty of finding a home in their shrinking grass-land habitat. In the midst of our other worldly concerns, I hope we can leave room for the Indian wolf to continue living where it has roamed for many thousands of years.

Lauren Hennelly is a PhD candidate in the Mammalian Ecology and Conservation Unit at the University of California, Davis, where her thesis research is focused on whole-genome data to study the evolutionary his-tory of gray wolves. In 2014, she be-came a Fulbright scholar affiliated with the Wildlife Institute of India to study Himalayan and Indian wolf behavior.