How did wolves become dogs? Time, food and selective breeding is the likely answer

You are here: Home1 / Wolf Info2 / Facts vs Fiction3 / How did wolves become dogs? Time, food and selective breeding is the likely...

How did wolves become dogs? Time, food and selective breeding is the likely answer 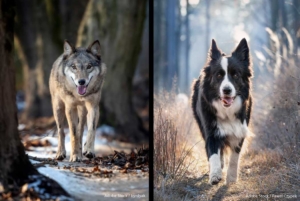 Dog lovers, whether they own a chihuahua or a Labrador retriever, all eventually ask one question: How is it that this domesticated dog came from wolves?

That’s not an easy question to answer, but there are two main hypotheses surrounding the topic and both were discussed in a 2021 paper written by David Mech and Luc A. A. Janssens.

The two hypotheses are:

The two biologists discount the hypothesis of self-domestication for several reasons and focused the majority of their research on the first hypothesis.

In the hypothesis Mech and Janssens focused on, humans collect pups from dens. Once pups are collected, fed and nurtured, they tame easily and become reliant on humans for food, tend to remain near their food source and generally remain friendly towards humans, according to previously published research (Hall et al, 2015; Marshall-Pescini et al, 2017; Range et al, 2019).

Scientists generally agree that dog domestication began some 15,000-20,000 years ago.

That gives plenty of time for selective breeding, as described above, to slowly have a significant impact.

Mech and Janssens state that the main motive for domestication of wolves, in their opinion, was for their use as pets and companions.

“Wolves’ strong social nature helps them develop a rapport with humans who raise them and feed them (Crisler 1958, Zimen 1987, Hall et al. 2015). Humans who raised wolf pups might have enjoyed the same benefits that modern humans gain from pets (Amiot et al, 2016).

Other reasons shared by previous research regarding why humans may want to domestic wolves include:

Mech and Janssens offered the following expanded version of the pup adoption and artificial-selection hypothesis:

The key to this process, Mech and Janssens write, is humans regularly feeding wolves and continually keeping only those living peacefully and with the least trouble.

Mech and Janssens concluded by writing:

“We offer the above pup-adoption hypothesis as more in keeping with basic wolf ecology and behavior than other hypotheses, and as the hypothesis that better explains why and how humans could have isolated wolves from their ancestors, bred them selectively, and shaped them into domestic dogs.”

The idea that wolves domesticated themselves, while rebutted by Mech and Janssens, does have several supporters. Greger Larson and Dorian Fuller published a paper in 2014, “The Evolution of Animal Domestication” in which they detail the alternative hypothesis.

They reference how there are significant genetic and morphological differences between wolf populations in North America based on their prey. One population that migrated with and preyed on caribou was significantly different than another territorial population that remained in a boreal forest. The difference in prey-habitat specialization “has been sufficient to maintain genetic and even coloration divergence,” (Musiani et al. 2007).

“These examples suggest a plausible scenario for dog domestication in which at least one wolf population became an ecotype suited to the human niche created by hunter-gatherers,” Larson and Fuller wrote. “A Pleistocene wolf population could have begun following mobile hunter-gatherers, thus slowly acquiring genetic and phenotypic differences that would have allowed them to more successfully adapt to the human habitat. … Having initiated and sustained the divergence, they could have then become domesticated through more intensive human selection.”

Derr M (2011) How the dog became the dog; From wolves to our Best Friends. Penguin Books, London, UK.

Horard-Herbin MP, Tresset A, Vigne J-D (2014) Domestication and uses of the dog in western Europe from the Paleolithic to the Iron Age. Animal Frontiers 4:23-31.

Degerbol M (1961) On a find of a Preboreal domestic dog Canis familiaris L. from Star Carr, Yorkshire, with remarks on other Mesolithic dogs, Proceedings of the Prehistorical Society (new Series) 27:35-55.