Do wolves in different parts of the world have different cultures?

You are here: Home1 / Wolf Info2 / Facts vs Fiction3 / Do wolves in different parts of the world have different cultures?

Do wolves in different parts of the world have different cultures?

Do wolves from different regions or populations have distinct cultures?  It’s an open debate.

I don’t mean wolf music or art or sports customs, but food might be a key cultural difference for some wolves.  What about howling – does it have regional differences that depend upon learning and can be trendy, like whale or bird songs?  And are humans potentially shaping wolves in ways that favor certain behaviors and therefore the development of specific wolf cultures?  It’s plausible to think that wolves have cultural differences across their global range and there are some intriguing observations of behaviors that indicate variation in wolf personalities, a precursor for cultural development.

Animal cultures are a hot topic in ecology and conservation science right now.  In fact, I and colleagues are currently working on a couple of papers for peer review on the topic of wolf personalities, carnivore cultures, what may look like, and why they might matter for conservation.  We are not all in agreement yet. 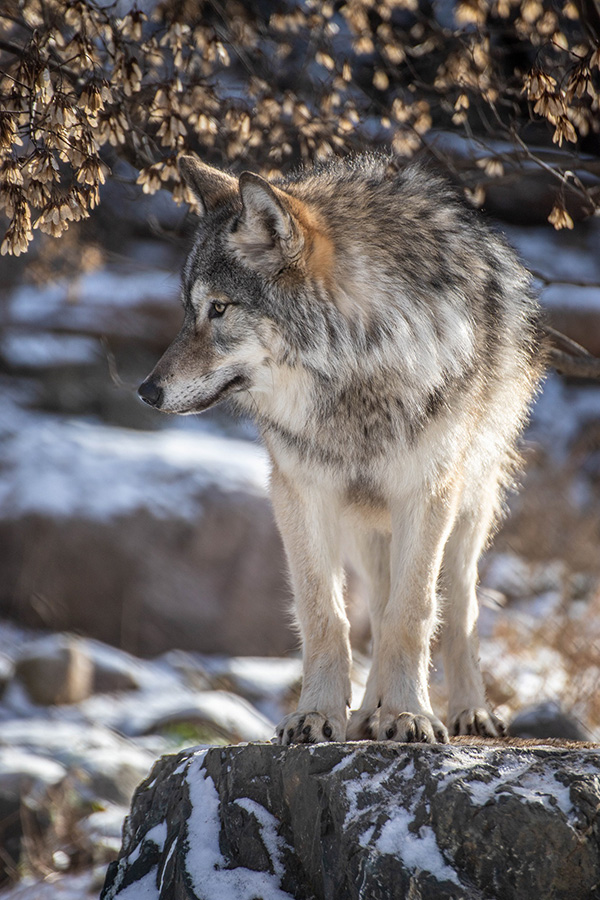 Strictly speaking, animal cultures are consistent differences in behavior between groups or populations that are a consequence of some form of social learning and are not directly caused by environmental factors or genetic differences.  Culture comes from socially learned and transmitted information.  The best evidence for animal cultures is based on studies of feeding behavior, migration routes, and vocalizations. Primates using tools to forage for insects is a cultural behavior.  Bighorn sheep and reef fish learn and transmit their migration routes, thereby creating cultural movements.  Bird and whales songs can change and trend across populations and then fall out of favor, replaced by new songs.

These examples of animal culture involve behaviors that are learned and then transmitted through social networks.  What might that look like in wolves?  It might start with behaviors that indicate personality.  Personality traits are precursors to cultural development.  Through the work of the Voyageurs Wolf Project we’ve noticed that some wolves are really good at killing beavers and spend a lot of timing waiting in ambush for beavers.  Other wolves have every bit as much opportunity to kill beavers in the same sorts of ponds and forests, but do not.  We’ve made comparisons for wolves that are in the same packs, equivalent ages, using the same habitats, and still we observe what appear to be differences in beaver hunting propensity and success. Some wolves have beaver hunting personalities.

Do wolves that hunt beavers lead to wolf packs with more beaver-hunting wolves?  Similarly, do wolves that learn how to fish for salmon or suckers teach others in the pack?  Do dispersing wolves that learned to kill bison to survive the winter keep doing so even if they settle in areas with increased availability of other prey like elk or caribou?  Hunting personalities in a few wolves may not necessarily lead to wolf cultures, but it is likely step.  The longevity and transmission of a behavioral trait is metric to measure animal cultures.  If new behaviors endure or create lasting traditionss across generations, then they are likely indicative of culture.  Some day we may have enough data to understand whether or not beaver hunting is cultural, but we are not there yet.

Wolf packs in some circumstances earn reputations as cattle-killers and sheep-killers. Such predatory behavior by wolves could be passed on from one generation to another and to packmates through social learning, developing into a culture.  Management actions reflect positions that assume such depredation behavior is cultural, that it is learned and transmitted. Lethal removal of entire “problem packs” is favored with the explanation that livestock killing is learned and perpetuated throughout the entire pack and across wolf generations. If that’s the case, then it demands we continue to identify conditions and methods that depress and deter depredation behavior.  Practices to promote certain cultures (such as hunting of wild prey, avoiding conflict with humans) while checking others (livestock depredation) appears essential to living with wolves.

From examples of predation behavior alone, there appears to be intriguing cultural possibilities among wolves.  Demonstrating cultures of wolves convincingly remains to be done.  Still, the possibility of cultures of wolves highlights the importance of multi-generational conservation that would not only safeguard population numbers and genetic diversity but would also allow for knowledge transfer and learning.

This article was written by Joseph K. Bump, who is a professor and Director of Graduate Studies in the Conservation Sciences Graduate Program at the University of Minnesota. Among his responsibilities is to oversee the Voyageurs Wolf Project.