You are here: Home1 / Wolf Info2 / Facts vs Fiction3 / Becoming a wolf biologist

Wolf biologists are the individuals who discover and uncover the truth about wolves, and in turn, use what they know to better understand, conserve, and manage wolves. But how does one become a wolf biologist? What path does a young person take to end up flying over the Northwoods counting the number of wolves in a pack or putting a GPS collar on a wild wolf?

Behind every fact you’ve ever read about wolves, behind every estimate of how many pups wolves have or how many moose they eat in a year, there is a wolf biologist. Less than a century ago, little if anything was actually known about wolves. Of course, there has always been the folklore—wolves only howl on nights with a full moon, they kill everything indiscriminately, and so on. However, stories and anecdotes about wolves often fall short of the truth about these mysterious predators. To understand what wolves are really like requires detailed observations, collecting samples from wolves and their prey, and analyzing wolf behavior and movements. These are the tasks of a wolf biologist. But more importantly, a wolf biologist uses all of this evidence to reach conclusions about what wolves are really like. 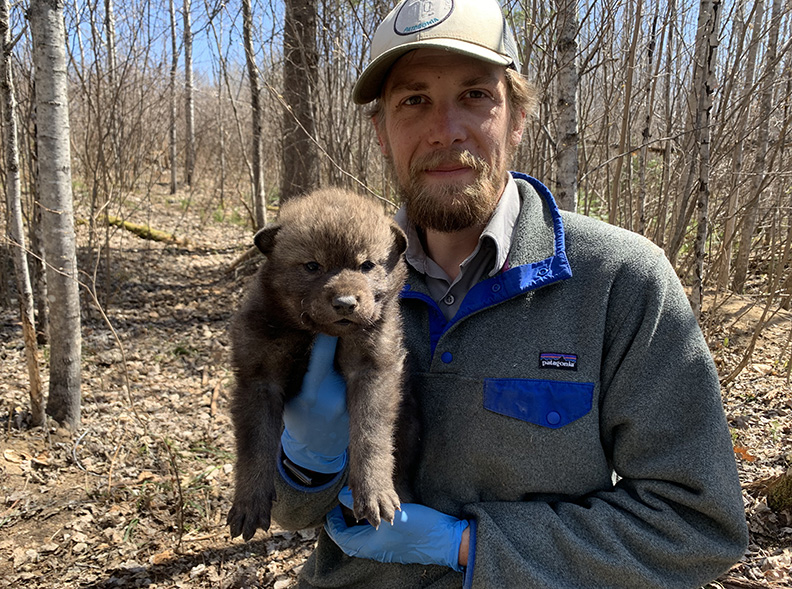 Austin Homkes, pictured above, is a biologist with the Voyageurs Wolf Project, which studies the summer ecology of wolves in Northern Minnesota. Homkes led a webinar on this topic, which can be watched for free by visiting this link: https://youtu.be/r6RpcLC821c.

In other words, wolf biologists are the individuals who discover and uncover the truth about wolves, and in turn, use what they know to better understand, conserve, and manage wolves. But how does one become a wolf biologist? What path does a young person take to end up flying over the Northwoods counting the number of wolves in a pack or putting a GPS collar on a wild wolf?

To begin with, a person must have a genuine curiosity about the natural world to be a wolf biologist. Yes, many people say that they like wolves, or think wolves are majestic or interesting to learn about. But a wolf biologist needs to have a desire to discover the unknown about wolves, a desire to ask questions and dig deeper than the surface-level charisma that is associated with this iconic predator. There is a big difference between ‘liking’ wolves and wanting to know what makes a wolf behave like it does.

It’s worth noting here that studying wolves isn’t always pretty. For example, most people who are interested in wolves would jump at the opportunity to sit beside a sedated wild wolf and put a GPS collar on it. However, not everyone would be so eager to battle swarms of biting insects to collect scats from that GPS-collared wolf during the summer to estimate its diet. Genuine curiosity motivates wolf biologists to undertake such challenges for a chance at learning something new. 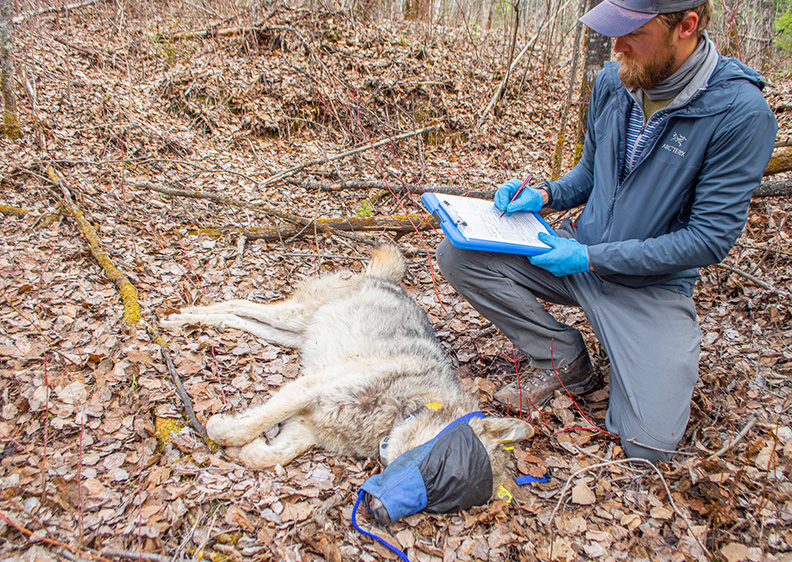 Next on the list for an aspiring wolf biologist is education. Education and training focused in the sciences, and more specifically biology or ecology, is the most common route for budding wolf biologists. Indeed, a quality education equips one with critical-thinking skills, a strong work ethic, knowledge of biology and the natural world, and interpersonal skills—all crucial aspects of a great wolf biologist. In practice, this often entails, at a minimum, getting an undergraduate degree and more and more commonly an advanced degree such as a Masters or Ph.D. The latter are especially important for those interested in leading and directing wolf research. Having a quality education is necessary not only for meeting minimum requirements for many biologist positions, but also for gaining the next important qualification of a wolf biologist: hands-on experience.

Experiences are key for any aspiring wildlife biologist, and a wolf biologist is no exception. The more time spent doing research similar to what a wolf biologist does—like working in the field or collecting and organizing samples and data—the more prepared someone is to be a professional wolf biologist. More importantly, however, is that these experiences help one connect with and build relationships with established wolf biologists and other wildlife professionals. Ultimately, the goal of working hard in any particular position—beyond honing certain skills—is to gain a professional reference or letter of recommendation vouching that what you say about yourself is true and that you have a history doing a great job in past positions. Recommendations are crucial for progressing towards future experiences. Having a versatile skill set and great recommendations from past experiences make someone a much more attractive applicant when they apply for a wolf-biologist position.

It’s important to realize that not every experience needs to be explicitly wolf-related. Many skills that a wolf biologist needs can be gained in a variety of places. For example, the analytical or data management skills that a wolf biologist needs might also be gained through another work experience or studying different wildlife. Many skills are transferable. Additionally, many experiences, especially those earlier in a wolf biologist’s career, will likely be volunteer positions. Volunteering both in and out of the field of biology is a great way to get a foot in the door and begin working one’s way to their career goal.

Of course, becoming a wolf biologist is challenging because there is a lot of competition—many people want to be wolf biologists. This is where an education, past experiences and good references or letters of recommendation matter. The combination of a quality education and experiences sets someone apart from the pack and makes them more competitive for increasingly specialized positions. And a great reference or letter of recommendation from a well-known wolf biologist demonstrates that someone is indeed well-qualified for the position.

There is no single path to becoming a wolf biologist, though there are certain aspects of the journey—education, experiences, and recommendations—which are quite common amongst established wolf biologists. If one hopes to be a wolf biologist someday, the first step is to get an education and start gaining hands-on experience. One should try to make connections with biologists already in the field. When an opening to study wolves or other wildlife presents itself, they should demonstrate that they are a critical thinker, a hard worker, conscientious, detail-oriented, a team player, and really interested in the work they are doing. Who doesn’t want to hire someone like that? The most important characteristics to have are adaptability and determination, much like wolves themselves.

Austin Homkes led a recent webinar on this topic, which can be watched below.

Austin Homkes is a biologist with the Voyageurs Wolf Project, which studies the summer ecology of wolves in Northern Minnesota. Homkes has been studying the wolves of the Greater Voyageurs Ecosystem since 2015. He earned a Master’s degree from Northern Michigan University, focusing on wolf predation on white-tailed deer fawns. Homkes is originally from Holland, Michigan, and now lives in Kabetogama, Minnesota.