Are wolves’ footprints on ecosystems overstated?

You are here: Home1 / Wolf Info2 / Facts vs Fiction3 / Are wolves’ footprints on ecosystems overstated?

Are wolves’ footprints on ecosystems overstated?

By Dana Kobilinksy, The Wildlife Society

Some people revere wolves. Some condemn them. Some credit them with restoring ecosystems in places like Yellowstone National Park. Others condemn them for causing conflict with livestock.

But researchers recently found wolves (Canis lupus)—and other predators—aren’t singlehandedly responsible for many of these events. There is still a place for them in the ecosystem, they argue, but not because they’re engineers. 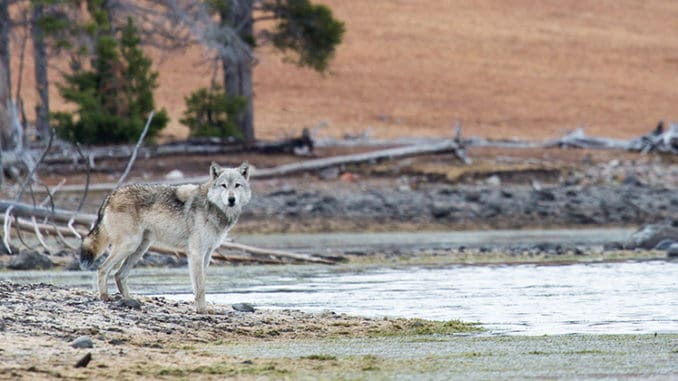 Wolves are neither heroes, nor villains, and their effects on ecosystems may be overstated, researchers found. Credit: Neal Herbert/NPS

“They have a right to exist just as we have the right to exist,” said Bernd Blossey, a professor of natural resources at Cornell University and the lead author of a review paper published in Frontiers in Conservation Science that sought evidence for some of these claims.

Blossey originally worked as an entomologist, studying the use of insects as biocontrol for invasive plants. He noticed that introduced plant species were super competitive with native species in the Northeast. But he soon found out that the introduced plants weren’t the main driver of changes in the ecosystem, but white-tailed deer (Odocoileus virginianus) were. As he researched the issue, he found that sterilization and hunting wouldn’t significantly bring down deer numbers. That prompted other suggestions.

“There is this idea there that maybe the predators like mountain lions, wolves and bears could help,” he said. “We started to look more into what predators could do or not do and whether it would be helpful or not.”

Blossey turned to some collaborators who have been doing some work on predators. One was Jen Price-Tack, a scientist with the Wisconsin Department of Natural Resources, who works on elk (Cervus canadensis), wolves and black bears (Ursus americanus) in Northern Wisconsin. Another collaborator, Elaine Brice, who is now a postdoctoral research in Blossey’s lab, was in Yellowstone for her PhD research, studying what some researchers have dubbed a trophic cascade that restored the ecosystem after wolves returned. He also looked at research dating back 70 years to see what kind of effects wolves had on ecosystems.

Blossey and his co-author, Darragh Hare, with the Wildlife Conservation Research Unit at Oxford University, concluded that based on the available evidence, wolves by themselves would probably not restore the landscape the way conservationists might hope. They also probably would not cause the devastation to livestock that some ranchers fear.

“One of the big things that we see is that the data that we have is not good enough for us to actually make these bold claims,” he said.

Looking at wolves’ effects on deer, Blossey and Hare argue that that past research didn’t take into account other ungulates that wolves prey on, and it didn’t consider a lack of forage due to excessive deer browse itself and other factors like cattle grazing, feral horses and drought, which could play important role of deer abundance declines.

On the other side of the coin, wolves also wouldn’t likely cause large-scale problems for humans, they found. “Dogs are more dangerous than wolves are to humans,” he said. But their presence may require some adaptations. Leaving your dog outside if wolves are around probably isn’t a good idea.

Instead of reintroducing wolves, Blossey suggests they be allowed to disperse naturally. They might even be able to help stabilize deer and elk numbers, he said, but they probably can’t do without the help of recreational hunting. Wolves have a role to play, he said, but they won’t likely restore ecosystems.

“Everybody that evolved here belongs here,” Blossey said. “I would love to have wolves here in New York. But I want to be sure we’re not making the argument for the wrong reasons.”

This article was first published by The Wildlife Society at wildlife.org. It is reprinted here with permission.

Dana Kobilinsky is associate editor at The Wildlife Society. Contact her at dkobilinsky@wildlife.org with any questions or comments about her article. You can follow her on Twitter at @DanaKobi.