How Do Wolves Say Hello?

Have you seen dogs jump up to greet their owners, bark at strangers or roll over when another dog approaches? Then you already know something about how wolves communicate. Dogs inherited most of their language from their ancestors, the wolves.

Many of us think of communication only as talking or writing to each other. Those are two ways humans share information every day. How do wolves “converse?” Even though they cannot talk or write, wolves communicate effectively in several ways. 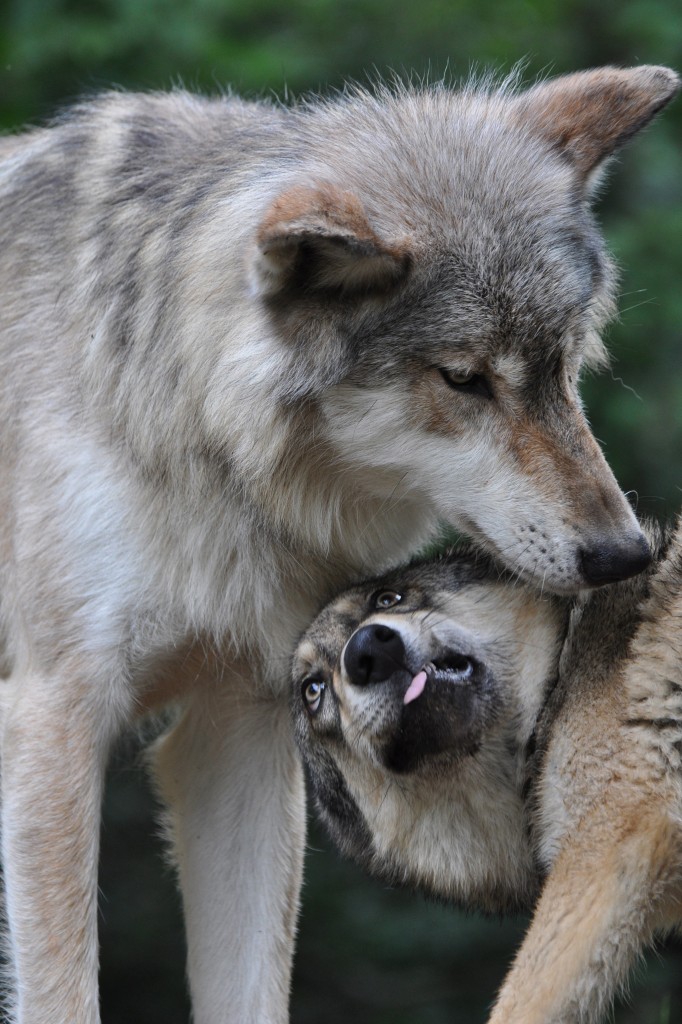 Wolves use body language to convey the rules of the pack. A wolf pack is very organized. Rule number one says that the pack is made up of leaders and followers. The pack leaders are the male parent and the female parent – usually the father and mother of the other pack members. They are known as the dominant pair and are usually the only members of the pack to produce pups, thus are also referred to as the breeding pair.

Any wolf can become the dominant male or female. However, to do so, it must find an unoccupied territory and a member of the opposite sex with which to mate. Or, more rarely, it moves into a pack with a missing dominant male or female and takes its place, or perhaps kills another dominant wolf of the same gender and usurps its mate.

The dominant male and female are in charge of the pack. To communicate dominance, they carry their tails high and stand tall. Less dominant wolves exhibit submissive behavior by holding their tails down and often lower their bodies while pawing at the higher ranking wolves.

There are two levels of submissive behavior: active and passive. Active submission is a contact activity in which signs of inferiority are evident such as crouching, muzzle licking and tail tucking. The behaviors typical of active submission are first used by pups to elicit regurgitation in adults. These behaviors are retained into adulthood by subordinate wolves, where they function as a gesture of intimacy and the acceptance of the differentiation of the roles of the wolves that are involved.

This is a contact activity in which signs of inferiority are evident such as crouching, muzzle licking and tail tucking. The behaviors typical of active submission are first used by pups to elicit regurgitation in adults. These behaviors are retained into adulthood by subordinate wolves, where they function as a gesture of intimacy and the acceptance of the differentiation of the roles of the wolves that are involved.

This is shown when a subordinate wolf lays on its side or back, thus exposing the vulnerable ventral side of its chest and abdomen to the more dominant wolf. The subordinate wolf may also abduct its rear leg to allow for anogenital inspection by the dominant wolf. If two wolves have a disagreement, they may show their teeth and growl at each other. Both wolves try to look as fierce as they can. Usually the less dominant wolf, the subordinate one, gives up before a fight begins. To show that it accepts the other wolf’s authority, it rolls over on its back. Reactions to this behavior may range from tolerance (the dominant wolf standing over the submissive wolf) to mortal attack, particularly in the case of a trespassing alien wolf. Following the dominance rules usually keeps the wolves in a pack from fighting among themselves and hurting each other.

Wolves convey much with their bodies. If they are angry, they may stick their ears straight up and bare their teeth. A wolf who is suspicious pulls its ears back and squints.

Fear is often shown by flattening the ears against the head. A wolf who wants to play dances and bows playfully. 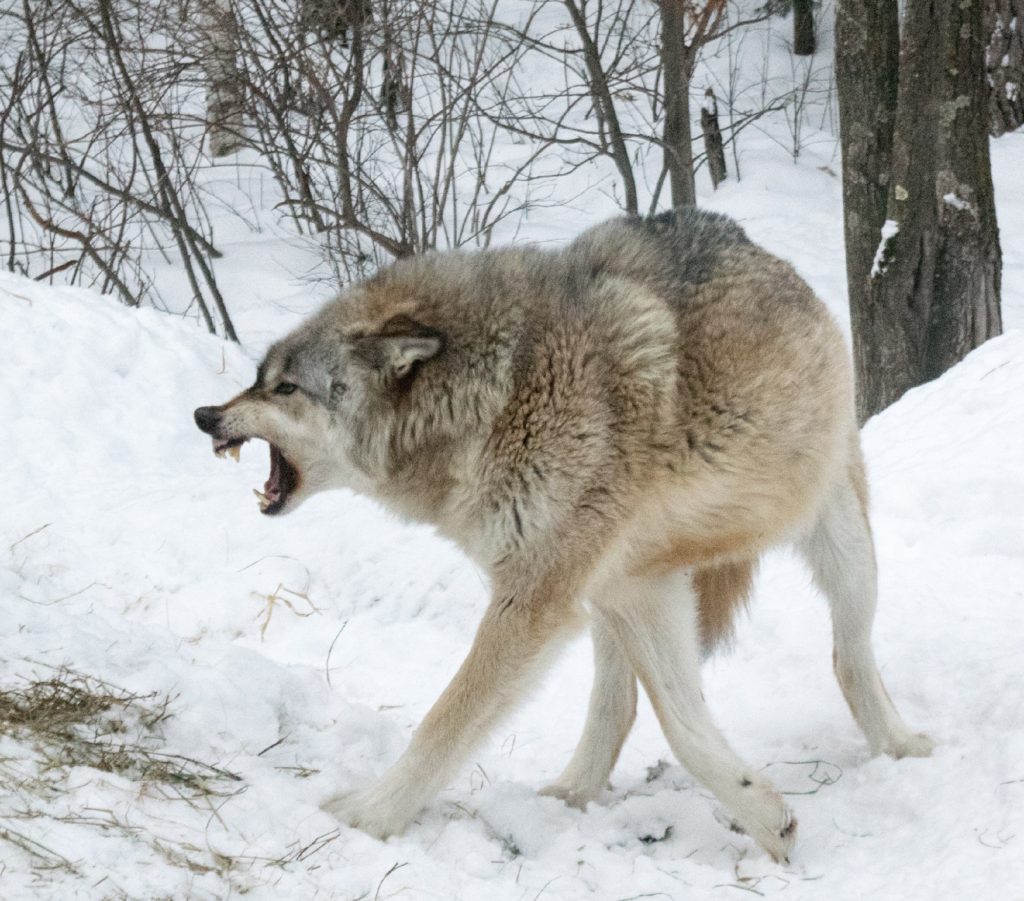 Wolves have a very good sense of smell—about 100 times greater than humans. They use this sense for communication in a variety of ways. Wolves mark their territories with urine and scats, a behavior called scent–marking. When wolves from outside of the pack smell these scents, they know that an area is already occupied. It is likely that pack members can recognize the identity of a packmate by its urine, which is useful when entering a new territory or when packmembers become separated. Dominant animals may scent mark through urination every two minutes. When they do so they raise a leg, this dominant posture utilizes multiple forms of communication and is called a “Raised Leg Urination” or RLU.

Wolves will also use urine to scent mark food caches that have been exhausted. By marking an empty cache, the animal will not waste time digging for food that isn’t there.

Sources of pheromones in wolves include glands on the toes, tail, eyes, anus, genitalia and skin. For example, a male is able to identify a female in estrus by pheromones present in her urine and copulation will only be attempted during this time.

Of course, their sense of smell also tells them when food or enemies are near. 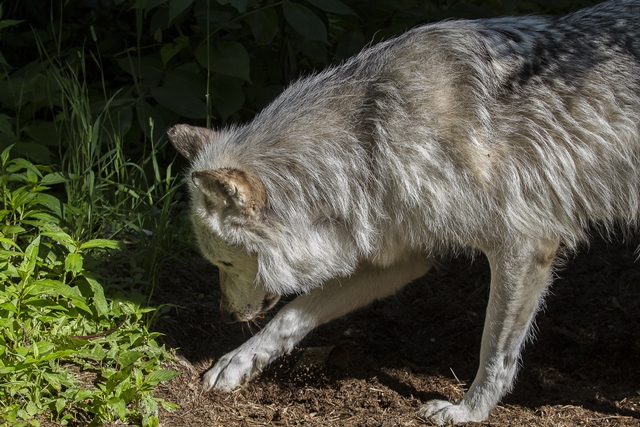 When you hear a wolf howl in the night–the are not howling at the moon–they are communicating. They call any time of the day, but they are most easily heard in the evening when the wind dies down and wolves are most active. Wolves’ vocalizations can be separated into four categories: barking, whimpering, growling, and howling. Sounds created by the wolf may actually be a combination of sounds such as a bark-howl or growl-bark. 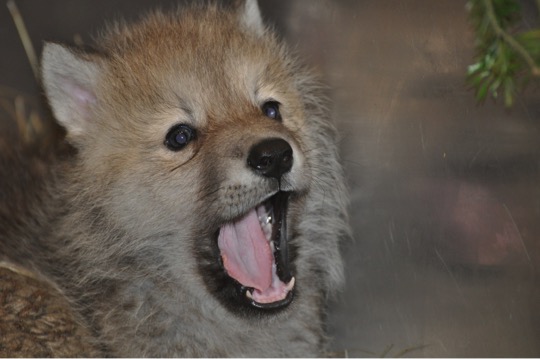 Barking is used as a warning. A mother may bark to her pups because she senses danger, or a bark or bark-howl may be used to show aggression in defense of the pack or territory.

Whimpering may be used by a mother to indicate her willingness to nurse her young. It is also used to indicate “I give up.” if they are in a submissive position and another wolf is dominating them.

Growling is used as a warning. A wolf may growl at intruding wolves or predators, or to indicate dominance.

Howling is the one form of communication used by wolves that is intended for long distance. A defensive howl is used to keep the pack together and strangers away, to stand their ground and protect young pups who cannot yet travel from danger, and protect kill sites. A social howl is used to locate one another, rally together and possibly just for fun.

Click here to howl with wild wolves in northeastern Minnesota! 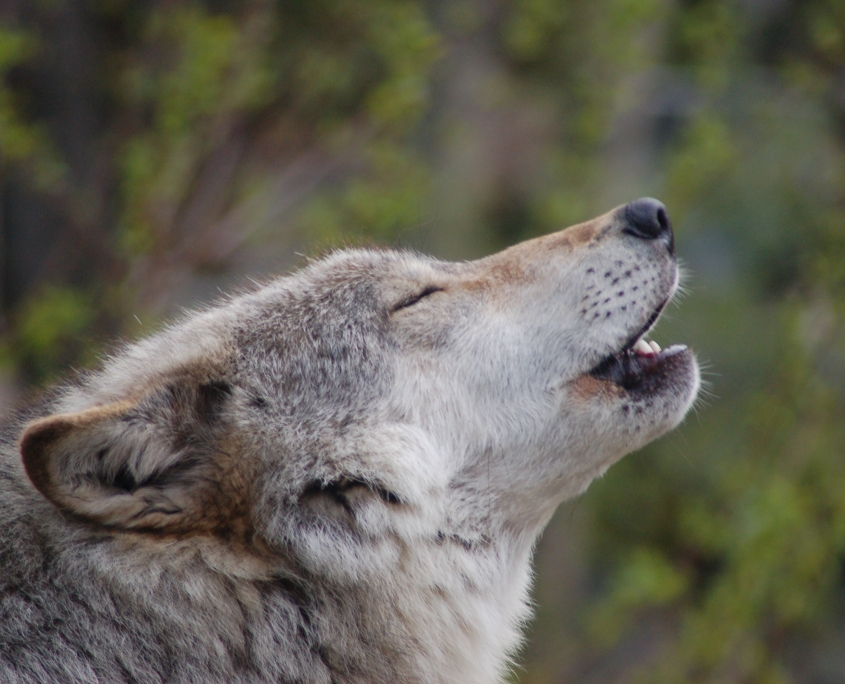