You are here: Home1 / Wolf Info2 / A Guide to the History of Wolf Recovery and Delisting in the United St...

Back from the Brink

By Richard A. Duncan

As readers of International Wolf magazine likely know, the gray wolf (Canis lupus) was protected under the Endangered Species Act, 16 U.S.C. § 1531, et seq. (ESA) of 1973. At that time, there were fewer than 1,000 wild wolves in the U.S., all in northeastern Minnesota. For many years, the wolf was listed as “endangered”—the highest level of protection from all take (harassment or killing)—in the lower 48 states, except for Minnesota, where the last naturally occurring population was reclassified in 1978 as “threatened”— a designation that allowed for some take, for livestock depredation control purposes, by federal trappers.

Once federally protected, the wolf began to reoccupy its historic range. Starting in the late 1970s, recovery plans were drafted for wolves in different geographies; wolf numbers and range grew in Minnesota, and natural emigration to Wisconsin and the Upper Peninsula of Michigan occurred; ancestors of a “Magic Pack” descended from Canada to northern Montana; and during the Clinton Administration, the Department of the Interior reintroduced wolves into Yellowstone National Park and the wilderness of central Idaho, from where they also began to disperse. Interior Secretary Bruce Babbitt explicitly linked wolf reintroduction to delisting, stating in 1995 that, “Our aim is to speed the recolonization of wolves so that they can be removed from the endangered species list and federal protection by the year 2002.”

Thus by the late 1990s, calls to “delist” the wolf began to be heard from ranchers, hunters and state governments, as wolf numbers reached levels prescribed for delisting by recovery plans across the upper Midwest and the northern Rocky Mountain states. Those calls found willing ears within the Interior Department, and regulatory proposals to delineate wolf habitat and populations into “distinct population segments” for delisting gained traction. 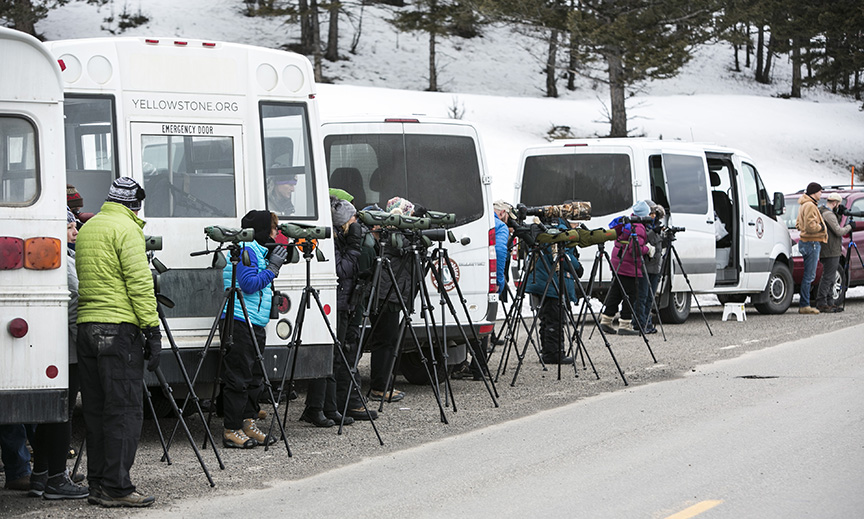 What followed since 2003 has been a continual series of delistings by Interior’s Fish & Wildlife Service of some or all wolf populations in the lower 48, followed invariably by legal challenges from the environmental community which have successfully argued in federal courts that USFWS has not followed the requirements of the ESA in its delisting regulations for the wolf. However, periods when the wolf has been removed from the protections of the ESA have been used by state legislatures and resource managers to speedily implement hunting and trapping seasons on wolves, resulting collectively in the take of thousands of animals, as the populations continued to increase.

The latest wolf delisting occurred in the waning days of the Trump Administration, when USFWS delisted the wolf across the U.S., except for a small population of Mexican gray wolves in the desert Southwest. As had happened during earlier instances of delisting, the Wisconsin legislature quickly directed the state DNR to implement a winter wolf hunt which far exceeded the take quota in a just few days.

Early in 2021, a coalition of environmental groups filed a lawsuit in Washington, D.C. challenging this latest delisting rule. (See Defenders of Wildlife, et al. v. U.S. Fish and Wildlife Service, et al., Case No. 3:21-cv-344 (D.D.C.)). That lawsuit is still in its early stages, with no substantive rulings by the court. However, it is an opportune time to review the legal standards by which a species gets delisted under the ESA.

Removing a species from the list of endangered and threatened species requires an examination of the same factors, such that the conditions that led to a species being listed no longer threaten its existence. Notably, even though the ESA requires recovery plans for listed species, which must contain “objective, measurable criteria which, when met, would result in a determination…that the species be removed from the list,” neither courts nor agencies have interpreted the achievement of numerical goals in recovery plans as sufficient to support delisting.

The wolf, as noted, has been the subject of several recovery plans, all of them quite dated.

On Feb. 10, 2022, a federal judge restored protections for gray wolves across much of the United States 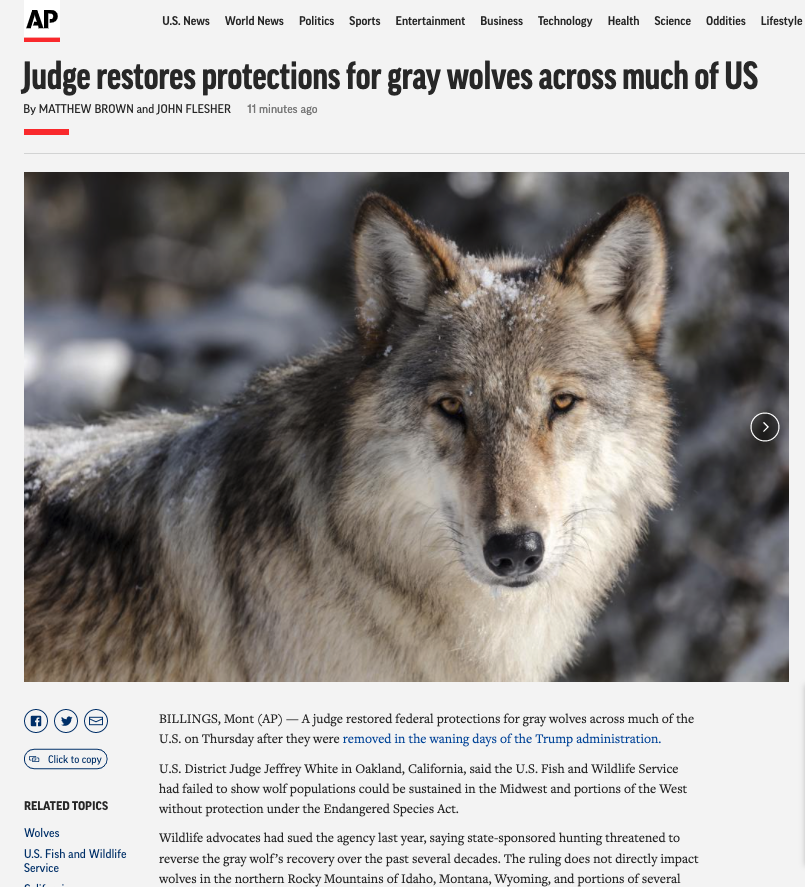 In the Great Lakes and the Northern Rocky Mountains regions, the numerical goals of the recovery plans were met or exceeded in the late 1990s.

Most of the federal government’s efforts to delist the wolf under the provisions of the ESA have turned on the use of the USFWS’s Distinct Population Segment policy (DPS). The ESA defines a species to include “any distinct population segment of any species.” In 1996, USFWS published the DPS Policy to enable the listing of subgroups of a population of species as threatened or endangered, even if overall, the species did not qualify for listing. The DPS Policy was designed to further species protection—not selectively reduce it.

Each time, federal courts across the country have struck down these attempts at selective delisting of wolves, pointing to a variety of overlapping missteps by the agency under the ESA:

• Focusing on the health of the wolf population only in its current range, while ignoring threats to wolf recovery in many other parts of the wolf’s historic range, but nonetheless delisting the wolf in those broad areas.

• The lack of state management plans (which all allowed sport hunting) adequate to protect a delisted wolf from future endangerment.

• Failure to explain how delisting would protect, on the one hand, wolves occurring outside the delisted Great Lakes Region and, on the other hand, how wolves in that DPS could continue to thrive with the loss of protected habitat all around them.

While the courts’ rationales have varied, and some decisions were modified on appeal, overall, the agency faced a bleak record of failure in its delisting efforts by the middle of the Trump administration.

The constant flip-flopping of the wolf’s status from endangered or threatened to delisted to endangered or threatened again was very damaging to ESA enforcement efforts. Individual wolves perished via state-sponsored hunting seasons and loosely regulated depredation control whenever the species was delisted. The rush to take wolves whenever the opportunity briefly arose also undermined confidence in the rule of law and encouraged a “catch it while you can” mentality counter to consistent species management at the federal or state level.

The Trump Administration decided to forego the failed DPS strategy. In 2019 the administration proposed delisting the wolf across the entire lower 48 states (except for the Mexican wolf in the desert Southwest). USFWS supported its proposed rule by arguing that the Western Great Lakes wolf population is well above recovery goals and stable, that wolves delisted by Congress in the Northern Rockies and in eastern Oregon and Washington via a 2011 appropriations act rider are already delisted, and that small recovering populations in Oregon, Washington and northern California are “not biologically important to the gray wolf entity.” The agency did not suggest that wolves have recovered across their historic range (all of North America). Notwithstanding substantial adverse comment that full delisting was compounding the legal and scientific failures under the ESA of the prior partial delistings, the rule was finalized in early November 2020.

As noted, a coalition of groups has filed suit again, seeking to overturn the latest rule. A final decision may take two to three years.

On a more philosophical note, Berkeley Law Prof. Holly Doremus, a leading scholar in environmental and natural resources law and science, has said of the debate over recovery and delisting:

Delisting is an aspirational goal, the achievement of which will require substantial regulatory and societal changes, rather than a short-term expectation. The primary purpose of the ESA is not delisting; rather it is the protection of species against ill considered human activity while society works toward the kind of fundamental mechanisms of regulating economic development that might support widespread delisting.

In assessing the law of delisting, it is important to focus not only on the technical language of the statute and regulations and policies, but also on the goal of species recovery as part of a larger aspiration for humans to alter our relationships with natural systems and to reduce our own often catastrophic, even if unintended, impacts on those systems.

Rick Duncan is a board member of the International Wolf Center and an attorney who represented Defenders of Wildlife in both the Yellowstone wolf reintroduction case and the wolf downlisting case discussed in Edward A. Fitzgerald’s book, Wolves, Courts and Public Policy: The Children of the Night Return to the Northern Rocky Mountains.