Wherever they coexist, wolves may prey on domestic animals. However, wolves normally prefer natural prey such as deer and elk. When wolves kill domestic animals it is called depredation. Wolves and domestic animals have interacted in North America since the arrival of Europeans with dogs and cattle. Yet efforts to understand and manage wolf and domestic animal interactions without whole-scale eradication did not begin in earnest until the mid 1970s.

Depredation is when wolves or other predators kill or maim domestic animals. Complaints of depredation are handled somewhat differently in each state. In most US wolf populations, states manage wolves and cooperate with local, state and sometimes federal agents to document and resolve complaints.  Compensation to livestock producers may come from state, federal or private funds.

In areas where the wolf population is federally managed under the Endangered Species Act (e.g. Arizona, New Mexico, North Carolina), the US Fish and Wildlife Service manages depredation issues with cooperation from state and local agencies.

The U.S. Department of Agriculture’s National Wildlife Research Center is the federal institution devoted to resolving problems caused by the interaction of wild animals and society. The Center applies scientific expertise to the development of practical methods to resolve these problems and to maintain the quality of the environments shared with wildlife.

There are also a plethora of local, state and private projects researching the effectiveness of non-lethal depredation prevention and control methods around the country.

Cattle resting in a pasture (Photo by Axel Hartmann)

Program Costs
Costs depend on the geographic area, animal(s) depredated, and the agency or organization responsible for compensation. The money paid out to claims does not include salaries or other administrative costs of the agencies involved.

With wolf range expanding in various areas around the country, more farms are accessible. However, in Minnesota, indications are that depredation continues to occur on about 2-5 percent of the 8,500-11,000 farms and seems to be decreasing, regardless of population increases. This may be due to livestock producers practicing more predator-wise husbandry methods such as properly disposing of carcasses. Another factor that influences depredation rates may be the reproductive success of ungulates.

Annual Losses
The number of domestic animals verified* as being killed by wolves varies greatly each year. It also varies greatly by geographic location. For example, a 1000-acre farm in Wisconsin is considerably smaller than a ranch in Montana where cattle or sheep are grazing in a multi-square-mile tract of pasture. In many cases in the western U.S., animals become missing and are never recovered therefore a claim is never made. 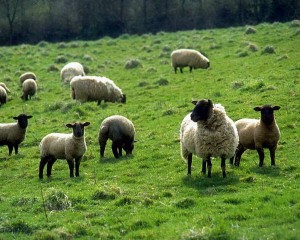 The number of wolf depredations may actually be higher than reported, as many claims of wolf depredation, such as missing calves, cannot be verified. Even though this is true, the view of wolves as livestock predators has sometimes been exaggerated, as depredation caused by coyotes, dogs, and bears is often misidentified by farmers as wolf depredation.

Most verified losses occur from May through October when livestock are released to graze in open and wooded pastures. Some animal husbandry practices, such as calving in forested or brushy pastures and disposing of livestock carcasses in or near pastures, has been believed to contribute to wolf depredation in Minnesota.  However, new research has indicated that these factors do not contribute to wolf depredation.

Cattle, sheep, and turkeys are the domestic animals most often taken by wolves, however, domestic dog depredation does occur. Wolf depredation on dogs has become more common in recent years as wolves have colonized areas with higher human densities. Dog owners in wolf territories can reduce the opportunity for wolf depredation by keeping pets inside or in an enclosed kennel when wolves are known to be in the area.

Value of Domestic Animals
The market value of domestic animals varies greatly by breed, age, condition, region of the country, and market fluctuations. The following are approximate market values for livestock:

In Minnesota, a county extension agent assesses the fair market value of each animal killed by wolves the owner is paid that value per animal minus any insurance the owner may have collected.

Wolf damage is often significant to individual producers and ranchers in more than financial ways. Livestock or pet losses can be emotional and taxing.  With success of wolf recovery programs comes the responsibility to protect local residents from an unreasonable level of livestock losses caused by wolves.

Compensation programs certainly make a difference but depredation control is still necessary. Wildlife managers must occasionally kill wolves that depredate on livestock so that this behavior does not become common in the general wolf population. The bitter debate over wolf restoration is largely over. Wolves have returned to the Western Great Lakes and the West and they are here to stay. In the future the debate will increasingly have to focus on the use of lethal methods to control wolf-caused problems, unless some new non-lethal method is found. So far, millions of dollars have been spent seeking such a method for coyote depredation control, but to little avail. 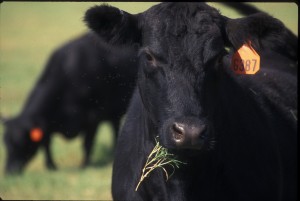 Domestic stock are bred for weight gain, milk production, and other qualities related to handling and production. The docile nature of most domestic stock makes them easy prey to wolves. In some cases, harassment of livestock by wolves has contributed to stress-induced weight loss, behavioral changes or illness, which reduces the productivity of the animal.

*A verified complaint is one in which USDA officials determine that wolves have killed or maimed one or more domestic animals as evidenced by (1) observing wounded animals or remains of animals killed and (2) finding evidence of wolf involvement, or (3) prior complaints being verified on the property in question.