The Human Dimensions of Wolf Ecotourism in North America

You are here: Home1 / The Human Dimensions of Wolf Ecotourism in North America 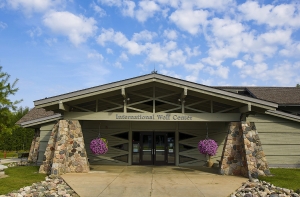 by Matthew A. Wilson, Departments of Sociology and Rural Sociology
University of Wisconsin Madison

A growing number of Americans are pursuing recreational experiences with wolves in their search for authentic encounters with wild nature. Once vilified as a beast of waste and desolation, the wolf has experienced a remarkable turnaround in public opinion and in that transition, has emerged as a new wildlife attraction . For many wildlife enthusiasts, to look into the eyes of a wolf, or to hear it cry from a distance is to experience the thrill of touching another world, a world where wildness still exists.

The Rise of Ecotourism In America
Who wants to recreate with wolves and why? Growth in wolf-oriented ecotourism is part of a much larger social trend. The best available data show that among a growing number of wealthy, well-educated, urban Americans there is a sub-population of individuals who express a desire for first-hand contact with wildlife wherein that contact does not involve killing or removing the animal. Since large predators like wolves do not generally live near residential areas, however, these individuals must often travel long distances away from home for the opportunity to see or hear wild wolves. As a result, “wolf ecotourists are easily identified as people who are willing to travel long distances just to be near wolves.

Every year, increasing numbers of the American public are expressing an interest in recreation with wildlife1. Over the past two decades, the gowth of the nonconsumptive use of wildlife has expanded dramatically in the United States. The best available socioeconomic data show that the number of Americans who took trips away from home for the primary purpose of observing, hearing, or photographing wildlife increased by 6% from 1980 to 1990, with a total of approximately 37 million Americans participating in 1990 (see Figure 1). This trend contrasts with a decrease of 1% for the 18 million Americans who hunted animals during that same time. In short, a large and growing segment of the American public is actively pursuing wildlife viewing as a form of outdoor recreation and that this group is steadily outpacing traditional forms of interaction with wildlife like hunting and fishing.

Nonconsumptive ecotourists are generally well educated and are likely to have higher household incomes than the average American. For example, tourists who visit the International Wolf Center tend to have higher household incomes and levels of education than the general U.S. population2. In a 1990 survey, 34% of all individuals who visited and later joined the International Wolf Center (IWC) reported that they held at least a college degree while over 31% held a graduate degree. In contrast, according to 1990 US census data only 13% of the US population held a college degree and 7% a graduate degree.

It is also interesting to note that public attitudes toward the wolf exhibit similar patterns: positive attitudes toward wolves are more likely to be held by highly educated and wealthier Americans. When asked to report their attitudes towards wolves in surveys, less educated respondents tend to report more negative views of wolves than individuals who are college educated. Furthermore, public attitudes toward wolves are split along a rural-urban continuum and notably differ by occupation. For example, in a 1986 survey of Minnesota residents, Dr. Steve Kellert found that Minnesota’s Twin City residents exhibited the least knowledge about wild wolves yet expressed a significant recreational interest in wolves while rural northern farmers and livestock owners tended to show greater levels of knowledge and direct experience with wolves while expressing more negative, hostile, and unsympathetic views towards wolves3.

With trends of increasing urbanization, rising education levels, and declines in agricultural employment in America, it is not surprising that attitudes toward the wolf have also changed. The wolf is a charismatic animal. The intensity of its gaze, its legendary skill as a predator, and the eeriness of its howl, all combine to make the wolf a symbol of wildness and untamed nature. The wolf is also elusive, however, avoiding contact with humans if at all possible. The avoidance of humans by wolves in the wild is well documented and probably well founded. Whereas wolf populations were once high and their numbers well distributed across North America, the wolf’s range and density declined precipitously as a result of eradication by humans. Government programs such as the now infamous wolf bounties were so effective in most areas of the United States that wolf populations were annihilated by the first quarter of this century. Today, the wolf is found in significant numbers throughout the Canadian provinces, Alaska, and from eastern Europe to Siberia, but the only significant population south of Canada exists in northern Minnesota where approximately 2,000-2,200 wolves remain4. Northern Michigan and Wisconsin support approximately 250 animals and Montana an additional 80. Now, with reintroduction efforts underway, Idaho and Wyoming, support an additional 140 or so animals.

In short, there are very few places in the United States where the ecotourist can go to see, hear, or photograph wolves in the wild. Because of the wolf’s low population density and its inherently elusive nature, the likelihood of seeing a free ranging, wild wolf is extremely low5. Interestingly, however, in contrast to its low visibility, the probability of hearing a wolf howl in the wild is far more likely. Wolves howl for a variety of reasons and the practical consequence of this tendency is that the wolf ecotourist is more likely to hear a wolf in the wild than he or she is likely to see one.

Bringing the Ecotourist and the Wolf Together
The successful development of wolf-oriented ecotourism, like any nature tourism enterprise, requires the convergence of three key factors: a reliable tourist base, a resident wolf population, and a stable, underlying tourist infrastructure in the host community. Wolves and tourists do not come together in close proximity merely by chance. Rather, a series of critical social and biophysical arrangements must be in place before the link between the ecotourist and the wild wolf can be made.

First and foremost, viewing, hearing, or photographing wildlife requires a resident animal population with relatively predictable appearances within an easily identified area. It is for this reason that most wildlife viewing areas can be found in locations that coincide with the ecology of the target animal. Unfortunately, as explained above, this requirement collides head on with the wolf’s life history. In short, wolves and people do not mix easily. To overcome challenges posed by bringing people and large predators together in close proximity, several innovations are being employed by educational and recreational programs throughout North America. As Figure 2 shows, all wolf ecotourism programs in America today employ techniques ranging from bringing wolves to the tourist (complete control over wolves) to bringing the tourist within range of a wild wolf or its sign (low control over wolves).

On the one hand, wolves are brought to people in the highly controlled setting of interpretive captivity programs. In Greendale, Wisconsin, a suburb of Milwaukee, for example, the nonprofit Timber Wolf Preservation Society maintains 16 pure blooded timber wolves in captivity. Visitors are charged an entrance fee of $2.00 to photograph and observe wolves in half-acre pens where the wolves live year round. Income for the project is generated through the entrance fee, private donations, and a small gift shop that sells wolf memorabilia like wolf t-shirts, wolf paintings, wolf photos, and wolf art. Here, wolves and regional tourists are brought into close proximity in a fully controlled setting with little room for spontaneity or surprise in the recreational experience. Another elaborate wolf captivity program is at located the IWC in Ely, Minnesota. For a fee, the general public can visit the educational facility where four captive timber wolves have been since birth. Four times a day, wolves and tourists come together in close proximity during a guided presentation by IWC staff. Separated by a large, two-way glass pane, people come within inches of wolves while remaining secure in a highly controlled environment. For many tourists, this is the closest they will ever come to viewing a wolf in a “natural setting.

With free-ranging wolves, the predictability and visibility of the wild animal are increased through the use of sophisticated technology. Recent innovations in radio telemetry allow innovative programs that bring humans to wolves in the wild with great accuracy (Hutchinson, 1993). Today, for example, some of Minnesota’s wolf packs are followed on the ground or in the air by radio tracking of collared wolves. This technological innovation provides wolf enthusiasts who are participating in field with the opportunity to encounter wolves in the wild.

Public wolf howls have also become an increasingly common and popular activity. The largest wolf howling program in North America today is offered by Canada’s Algonquin National Park6. Since 1963, park interpreters have escorted over 82,034 people on howling trips throughout the park on summer nights when the potential for contact is at its highest. With a little luck and a considerable amount of skill observing wolf tracks and other animal signs, it is also possible to trace the movements of a wolf pack within its home range and locate the pack’s most recent kills. In the winter, for example, wolf tourists in northeastern Minnesota can visit kill sites (deer and moose) by dogsledding or by snowshoeing deep into the boreal forest under the supervision of an expert naturalist.

Discussion
The best available evidence shows that wolf ecotourists represent a unique population of Americans who are part of a much larger trend towards increasing nonconsumptive wildlife use. This group is actively seeking out encounters with wild wolves. Yet, wolves are elusive, difficult to see, and occur in low population densities — all characteristics that inevitably confound the ecotourist’s desire to get close to a wild wolf. Therefore, it is perhaps somewhat ironic that only with the aid of science, technology, and unique adaptations in recreational strategies have current opportunities for viewing and hearing wolves in the wild been created. In sum, despite the growing desire by Americans to see, hear and photograph wolves, will likely that wolf-oriented ecotourism is likely to be limited to relatively uncommon environmental, social and economic contexts for the foreseeable future.

4. Kellert, S. R. 1986. The Public and the Timber Wolf in Minnesota. Transactions of the 51st National Wildlife and Natural Resources Conference, 193-200.