You are here: Home1 / Survey shows Minnesotan’s attitudes about wolves

In a democracy, public attitudes help shape government policies, including those concerning wildlife conservation and management. Like public lands, state and federal highways, and other government infrastructure, wildlife is a public resource that is managed for the people by government agencies. And like other public policy issues, people hold strong and divergent opinions on policies affecting wildlife, especially with the subject of wolves. 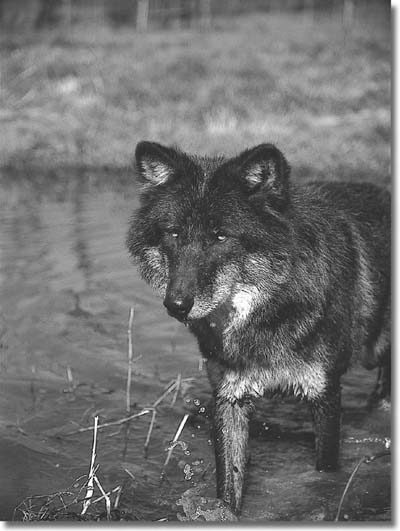 The survey augments information gathered from public meetings and the citizens roundtable sponsored by the Minnesota Department of Natural Resources in the development of a wolf management plan. While the meetings and the roundtable included the public in the decision-making process, generally only people with a vested interested in wolf management were involved. The survey results, however, provide a more comprehensive look at public opinion, reflecting both the opinions of the general public and people with strong views about wolves. The objective data in this survey can help develop a more effective, equitable and efficient plan for managing the species.

General Feelings about Wolves
Minnesotans clearly value wolves, viewing the animal as ecologically important, scientifically fascinating, aesthetically attractive, recreationally appealing, and significant for future generations. Only a small minority fear and dislike wolves or believe Minnesota would be a more desirable place without this predator. While many recognize the harvest value of wolves, either for fur or sport, the majority of respondents regard these benefits as of secondary importance. Moreover, a substantial proportion (a majority of non-northern residents and nearly 50 percent of northern residents) remain ethically opposed to harvesting wolves for fur or sport, and fear a legal harvest would result in excessive and unsustainable numbers of wolves being killed.

Population Expansion and Management Concerns
The majority of Minnesota residents are divided about the prospect of the wolf spreading much beyond the northern part of the state, and do not think this animal should occur in urban areas. Moreover, most believe wolf numbers should remain around 2,000 (less than the current population of about 2,500), and the animal should be removed from the federal endangered species list and returned to state management. On the other hand, most of the general public fear this change in management authority could result in high wolf mortality, and believe the state should maintain a moderate to great deal of protection of this species.

Wolves and Human Activity
The majority of Minnesotans do not believe the wolf is an impediment to economic and social development, and endorse the protection of needed wolf habitat. Still, most respondents do not want the wolf to interfere with private property rights or result in undue restrictions on private land use. Additionally, a majority of respondents favor protecting livestock from wolf depredation. Most of the general public endorse, however, the use of non-lethal and humane control techniques, and believe financial compensation to farmers should only occur if they engage in livestock practices that discourage wolf attacks and provide clear evidence of wolf depredation having occurred. Farmers and, to a lesser extent, northern Minnesota residents, express stronger support for wolf control in cases of livestock depredation. Also, farmers and northern residents tend to see the problem of wolf depredation on livestock and pets as having become mo re extensive and serious.

Only a small proportion of Minnesotans report ever killing a wolf. On the other hand, a disturbingly large proportion of farmers, and especially northern residents, indicate knowing someone who they think killed a wolf.

Consumptive and Nonconsumptive Values Associated with Wolves
The public expressed strong support for the nonconsumptive value of wolves; most report having read or watched television programs and films about the animal. Most believe the presence of wolves contributes significantly to an outdoor experience, and endorse tourism and other forms of nonconsumptive use as ways of increasing the wolf’s economic importance.

Farmers expressed far stronger support for the utilization and control of wolves than did the general public, especially in comparison to non-northern Minnesota residents. The general public was characterized by stronger affection, moral concern, and scientific and outdoor recreational interest in wolves than farmers, although little difference occurred in levels of fear or dislike of the animal. Moreover, farmers tended to be more knowledgeable of wolves than the general public, especially than non-northern residents. Rural, elderly and less educated respondents expressed stronger support for the utilization and control of wolves, and less affection, concern and interest in this species, than better educated, younger, and non-rural residents.

Changes in Public Attitudes Toward Wolves
Affection for and interest in wolves appears to have increased from 1985 to 1999, especially among farmers. Support also expanded for controlling wolf damage to livestock, although most respondents continued to favor the use of non-lethal and humane techniques. Opposition to hunting wolves increased along with the perceived non consumptive value of this species. The proportion of non-northern residents who believe they know someone who killed a wolf ominously increased.

Implications
The results of this research should assist the state in assuming primary responsibility for managing the wolf. These results suggest that Minnesotans highly value the wolf and favor the protection of the species and its habitat. Most respondents recognize the importance of protecting legitimate human interests, such as livestock production, from damage inflicted by wolves, although in a humane and non-lethal manner.

The wolf is especially appreciated by Minnesota residents for its nonconsumptive value. By contrast, a majority of both northern and non-northern Minnesota residents remain skeptical about harvesting the animal for either fur or for sport, and are concerned that these forms of consumptive use could result in excessive and unsustainable mortality. As Minnesota assumes management responsibility for the wolf, the opportunity exists to protect and conserve this animal in a manner that enhances the state agency’s ability to manage wildlife in the public interest.