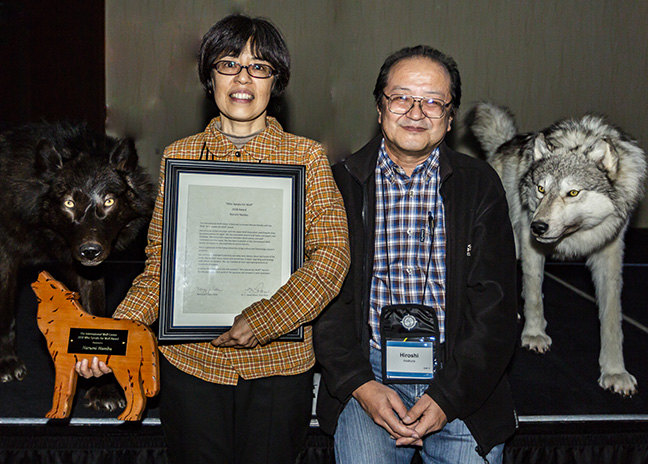 It was clear to the entire audience that Narumi Nambu had just received the surprise of her life.

As she walked toward the stage to accept the award, Nambu’s hands covered her mouth in excitement. “I thought it was a mistake when I heard my name, especially since Japan has not approached the world level of wolf conservation,” she said. “Because my country no longer has any wolves, it can only take from the world but cannot reciprocate”

Nambu earned the award for her work with the Japan Wolf Association. She’s an active member of the association, which aims to have wolves reintroduced in Japan. Nambu has translated multiple wolf books into Japanese, researches Japanese attitudes about wolves and their possible reintroduction there, speaks at conferences and publishes in a variety of forums.

“There were many researchers and educators from all over the world at the symposium,” Nambu said. “I was walking on air when I could speak and talk directly with these people. There were many experiences and ways to learn at the conference other than from formal papers about human and wolf society. At the banquet many of my heroes were gathered.”

Dr. L. David Mech, the founder of the International Wolf Center, had this to say about Nambu’s efforts: “I have known Narumi since the Center’s 2013 International Wolf Symposium, and she is one of the most passionate and enthusiastic supporters of wolf reintroduction into Japan.”

This is the first time in International Wolf Center history that the Who Speaks for Wolf Award has been given to a recipient from Asia. The Center’s Executive Director, Rob Schultz, was thrilled to see Nambu earn the award.

“Narumi’s efforts in Japan illustrate that wolves across the world play a vital role in our ecosystems,” he said. “The work she’s doing there is all too familiar to those who have done similar work in North America. We’re honored to present her with this award and thrilled to celebrate her success in front of her peers.”

The Japan Wolf Association (JWA) was formed in 1993. The JWA estimates that animals with no natural predators left in Japan, mostly sika deer and wild boar, have caused the equivalent of $1.8 billion in agricultural and forestry damage to date.

Preserving the environment for future generations in Japan motivates Nambu to continue her efforts for wolf reintroduction.

“I love my own country, Japan,” she said. “I want to leave the nature of Japan in a beautiful condition for the next generation. In biology I learned that wolves are important in nature. But Japanese society must learn how to relate with wild animals. I believe that connects with the happiness of people in the future.”

Nambu was quick to point out that she’s one small part of a big organization working hard at reintroducing wolves in Japan.

“More than me, there are other people in Japan who have worked longer and harder for wolf reintroduction—for example, Dr. Naoki Maruyama, leader of the Japan Wolf Association, along with my husband, Hiroshi Asakura, and local wolf educators,” she said. “This award is not only for me but for all of them, as well. I hope to be only the representative. This award is not like the goal tape at the end of a race, but instead it is the starter gun.”

The annual “Who Speaks for Wolf” award is given by the International Wolf Center to an individual, who has made exceptional contributions to wolf education, by teaching people how the wolf lives and by placing the wolf in the broader context of humankind’s  relationship to nature.

THE INTERNATIONAL WOLF CENTER, founded in 1985, is known worldwide as the premier source for wolf information and education. The mission of the Center is to advance the survival of wolf populations by teaching about wolves, their relationship to wildlands and the human role in their future.