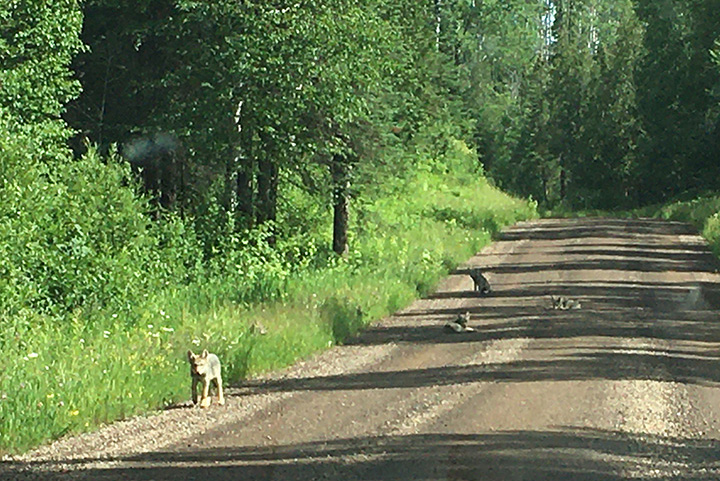 Occasionally, people see both adult wolves or pups on a roadway.  Naturally, people get very excited when they see wildlife and want to stop, take pictures, and hopefully watch them for a while. This very scenario played out in July 2020 when a group of six wolf pups appeared near a road in northeastern Minnesota. Before long, residents of the area were asking where the pups were spotted so they could go take a look, too.

Caution is warranted, though.
Wolves and other wildlife can become habituated, losing their fear through frequent and close contact with humans.  Feeding them increases the chance they lose their natural fear avoidance of humans.  This can lead to danger for humans, but even more so for wolves. When wolves become too comfortable around humans,  wildlife officials will attempt to haze them to increase their fear of humans. If that does not work, they are likely to be killed by wildlife officials to prevent any possible incidents where humans can be harmed.
The great thing is that we have the ability to have a positive impact in reducing habituation through our behavior around wolves and other wildlife.
Here are some tips:

Following these tips will keep you safer and will keep wildlife safer. In fact, many wolves have been killed because they’ve lost their fear of humans.

Here are recent examples of habituated wolves that have been killed.