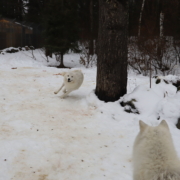 Things are going well in the Exhibit Pack. The wolves have been sharing bedding space, taking advantage of the cover hay on top of the pump housing. The pump housing is large enough so that all four wolves can fit on top, however, Axel can be a bit obnoxious and test the patience of the others. This testing behavior usually leads to him going off and finding his own space. There is plenty of cover hay in front of the observation windows, so he doesn’t have to look too far for a comfortable spot.

Ely has had some significant snowfall recently, and with fresh snow comes an air of excitement for the wolves. Axel is often the instigator of interactions and has been observed engaging Grayson in chases around the exhibit. If you watch our wolf cams regularly, you may notice that the Exhibit Pack’s activity level tends to heighten around 4 pm.  This increase in activity is indicative of the pack’s circadian rhythm, the 24-hour sleep/wake cycle that is present in living beings. 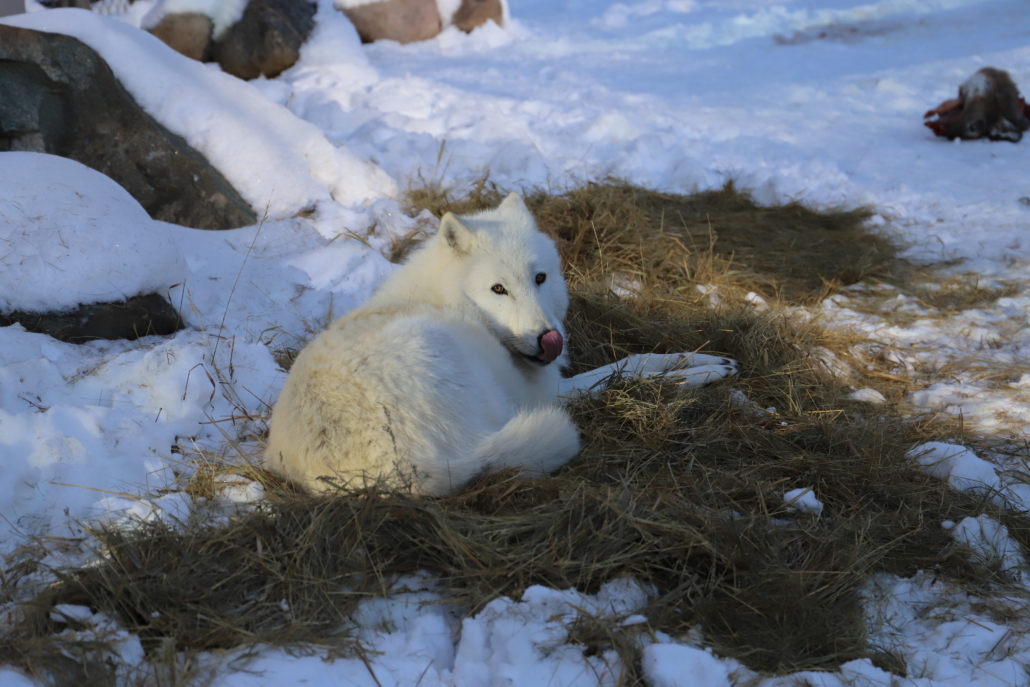 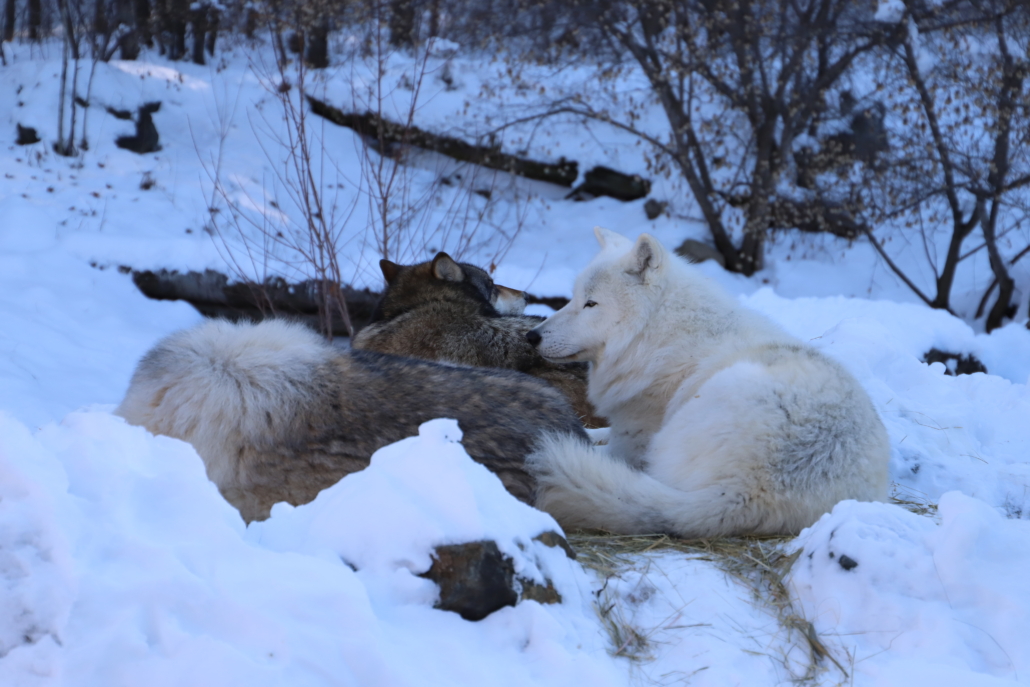 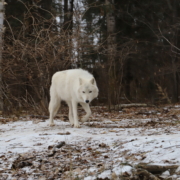 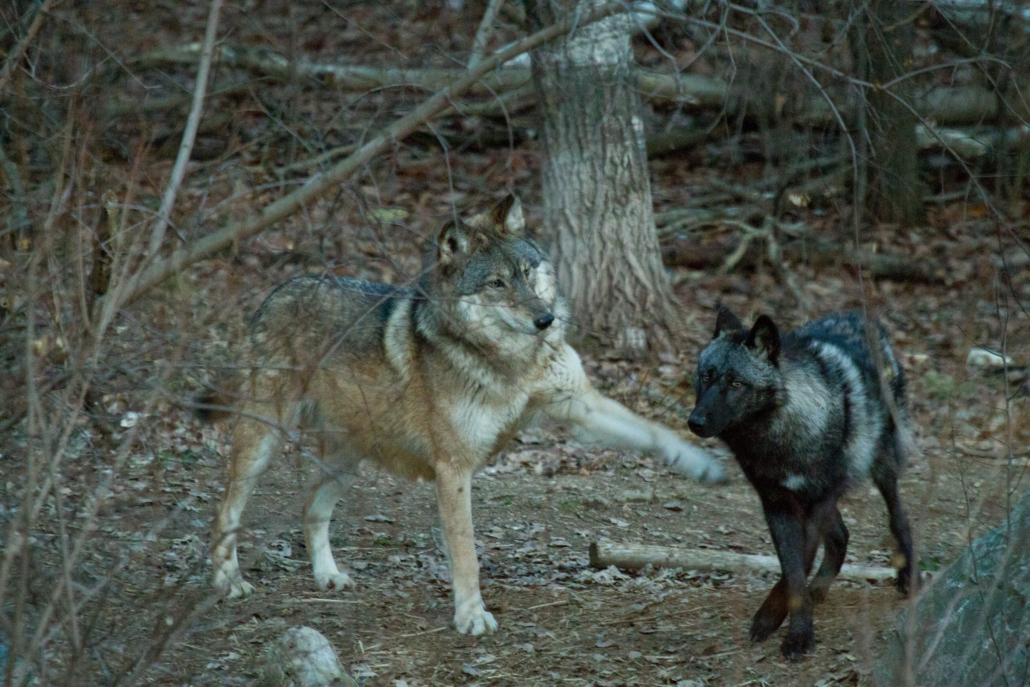 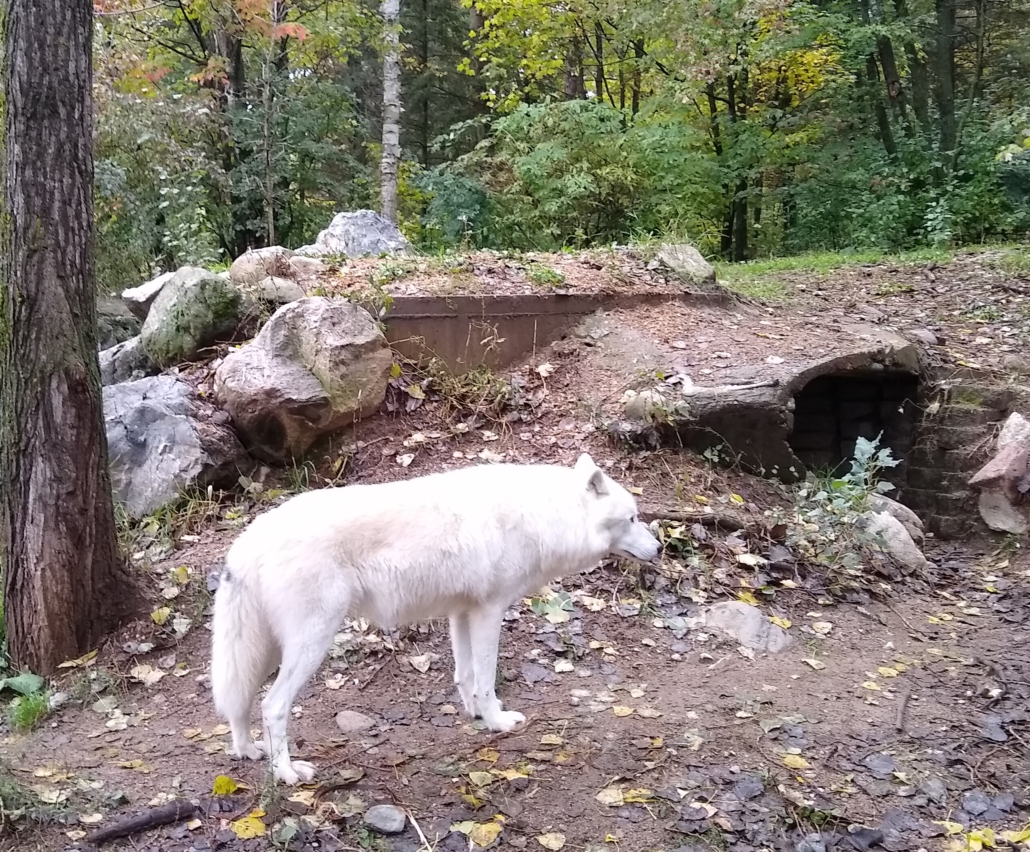 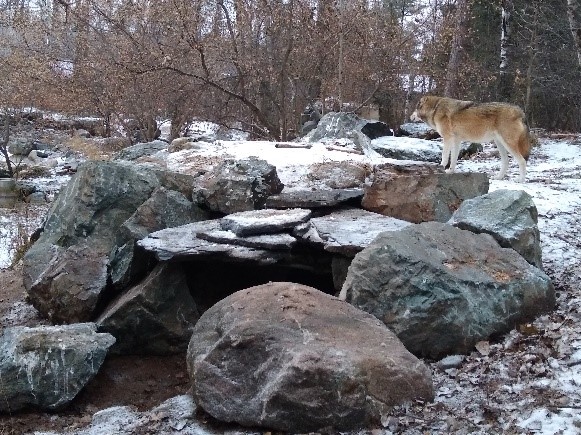 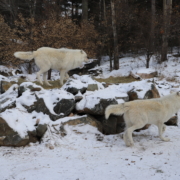 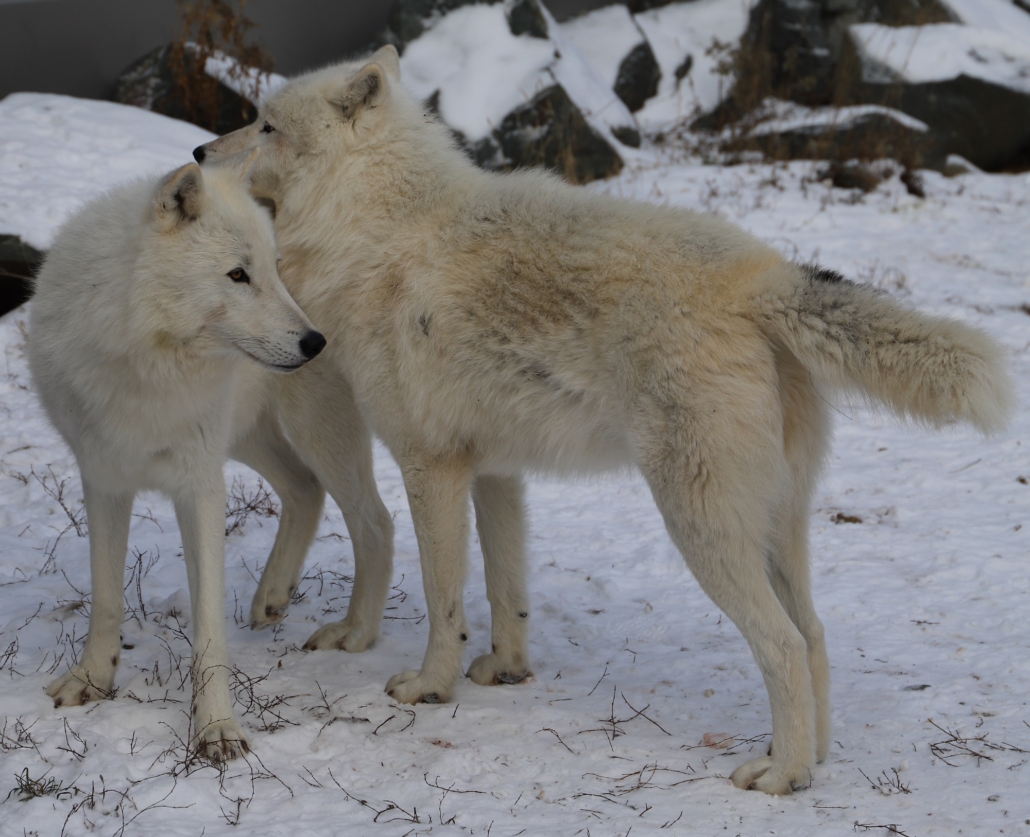 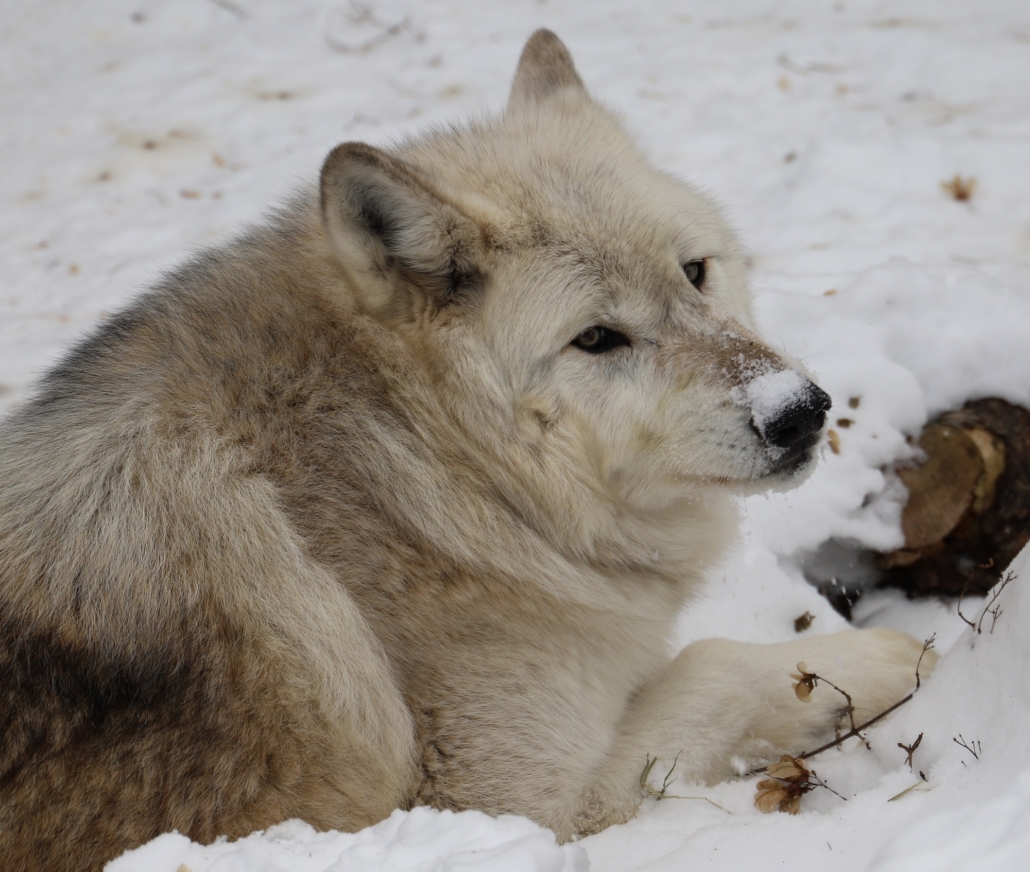 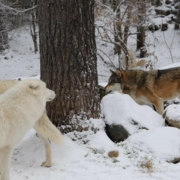 Snow has arrived in Ely, and it appears Boltz has gained some confidence. Colder weather usually heightens intensity of ritualized dominance in the Pack. In this photo, Boltz is staring at Axel and Grayson and exhibiting a slight lip curl along with pricked ears and a T-2 tail. Notice Grayson’s ears, they are pulled back in a submissive posture. If you look closely, you will spot Denali in the distance behind Boltz. Axel and Grayson have been focusing on and testing Denali for weakness. One of Boltz’s roles as a mid-ranking wolf is to take some of Axel and Grayson’s focus off Denali. Despite the focus of the younger wolves, Denali is still engaged socially with the rest of the Pack, and not quite ready for retirement yet. 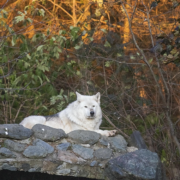 Wild wolf appears to be visiting the enclosure 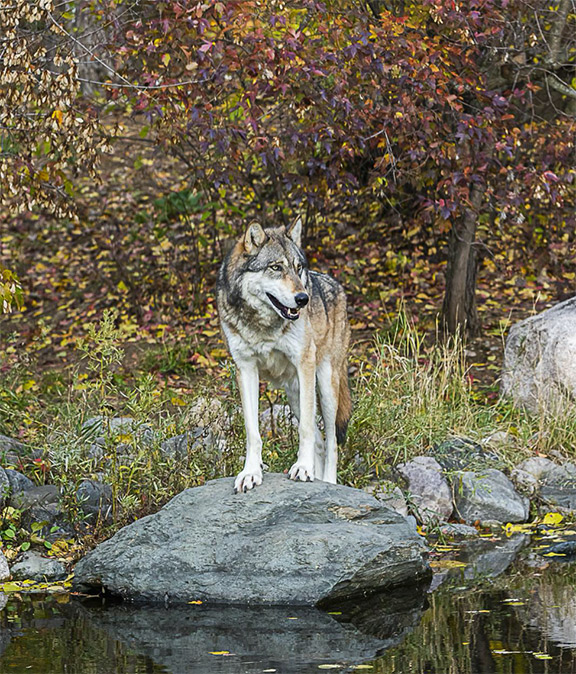 The leaves are falling fast, and so are the daily temperatures. Earlier this week, Ely got a light dusting of snow, which melted later in the day. The sunsets as of late have been incredible, with the sun hitting and highlighting the remaining leaves of Fall.

The Exhibit Pack has been heard howling frequently these past couple days, and they seem focused on the back fence line of the enclosure. There have been reports of a wild wolf hanging around the area, and this could be a possible explanation for the behavior. Even in captivity, wolves are territorial and highly aware of things going on around them.

Special thanks to Kelly Godfrey, who took the two photographs in this post. 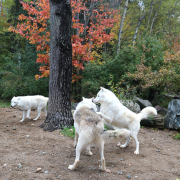 Fall has arrived in Ely

Fall has arrived with dynamic colors on the maple trees and some dynamic behavior from the young adults.  In this photo, Axel is doing a ride up on Denali with his tail extended above his back in what we term a T-1 tail.  At 11 years of age, Denali maintains a wide stance for support, but his wagging tail held in a relaxed position demonstrates the lack of concern about these interactions.  Grayson is coming around the tree in an intimidated ear posture called Ears Turned Sideways and Slanted Back or ETSB if you are familiar with our Ethogram codes.  Grayson’s expression is more of intimidation likely in response to his brother’s dominant posture.  Notice Boltz is not in the mix; he has been using the medical pen and den to avoid some conflict with Axel.  He’s still an active pack member, just a bit more cautious when Axel’s tail extends above the back. 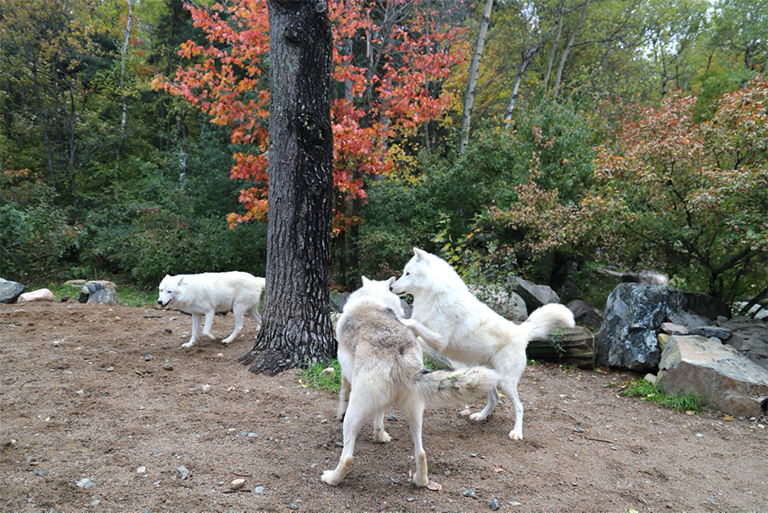