You are here: Home1 / Wolf Info2 / Wolf News3 / Headlines4 / Caption attached to photo of wolves traveling through snow as a pack is...

This popular photo has been circulating around the internet for many years now. The photograph is typically accompanied with a caption that reads like this:

“A wolf pack. The first three are the old or sick. They give the pace to the entire pack. If it was the other way round, they would be left behind, losing contact with the pack. In the case of an ambush, they would be sacrificed. 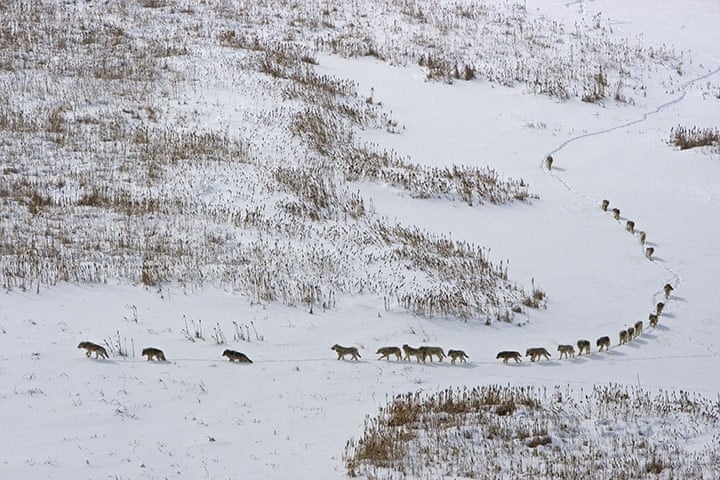 “Then come five strong ones, the front line. In the center are the rest of the pack members, then the five strongest following.

“Last is alone, the alpha. He controls everything from the rear. In that position, he can see everything and decide the direction. He sees all of the pack.

“The pack moves according to the elder’s pace and helps each other, watches each other.”

Many times over the years, the International Wolf Center has been asked if this caption is in fact true.

It is not true.

This photo was taken in 2011 at Wood Buffalo National Park by Chadden Hunter for a BBC series called Frozen Planet. The caption, which is not an accurate interpretation of the behavior in the picture, was added at a later date by an unknown source.

In the photo, a large pack of 25 wolves travels through deep snow. To save energy, they travel in a line, with the wolf in front cutting a path. Moving through the snow in this manner saves energy.  Understanding it from this perspective, it would not make sense to have the oldest and weakest in the front because they would have to use the most energy to cut the path for the group.

Think about when you travel through deep snow and how tiring it can be over time. If you were old, weak, or injured how easy would it be for you? The same is true for wolves.

The wolf in the back has simply fallen behind the rest of the group for unknown reasons and it does not relate to status. The wolf may have stopped to investigate something, or is compromised in some way, and is having trouble keeping up.

Killing nearly 500 wolves in a year failed to protect endangered caribou –...Alpha wolf: What does it mean, and should it still be used?
Scroll to top Book Now