What is the Scat Award? 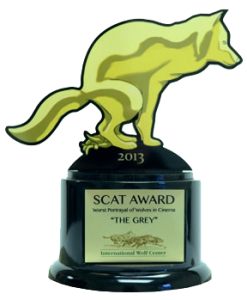 The International Wolf Center created the Scat Award to call attention to the books, movies, advertisements, TV shows, and other media that portrays wolves in the most inaccurate, ridiculous, or damaging light. Our intention is not to ridicule creative endeavors, but to use these highly public opportunities as teachable moments to counter damaging myths and misinformation. Oh, and we might just have a little fun while we’re doing it. The more facts we know, the better decisions we will make regarding wolves, their relationship to wild lands and the human role in their future.

In producing Natural Born Monsters, the Weather Channel not only represented wolves and their behavior in a most inaccurate and sensationalist manner, it did so while misrepresenting its intentions to the International Wolf Center, which (kindly, but regrettably) assisted in the filming of this monstrosity. Quite an accomplishment.

“The show was irresponsible,” said the Center’s Executive Director Rob Schultz. “Producers blended distorted facts, fabricated details and unreliable resources to confuse the public and incite fear and hatred of wolves. And that’s why we’ve nominated it for the 2014 Scat Award.”

Renowned Senior Research Scientist and wolf expert L. David Mech, of the U.S. Geological Survey, denounced the program as “Total nonsense and a real disservice to the wolf, to science, and to the public.

Mech, who has spent his 55-year career studying wolves in many areas of the world, says that the program is one of the most sensationalistic, exaggerations of the real wolf that he has ever seen.

“If wolves were so dangerous to humans,” Mech asked, “how have Minnesotans canoeing and hiking survived throughout the Superior National Forest and other parts of northern Minnesota, where some 2,500 or 3,000 wolves roam?  Or throughout most of Canada, where an estimated 60,000 wolves live?”

“Wolf attacks on humans are uncommon and extremely rare,” says Schultz. “To suggest that wolves have consumed all of their natural prey and are beginning to feed on humans is ridiculous and demonstrates a lack of understanding of our natural world.”

The Grey. 2012 Action thriller. Directed by Joe Carnahan and starring Liam Neeson. 117 minutes. The Grey follows a number of men stranded in Alaska after a plane crash, who are forced to survive using little more than their wits as a pack of wolves stalks them. The film is based on the short story “Ghost Walker” by Ian MacKenzie Jeffers, who also co-wrote the screenplay with Carnahan.

Lone Wolf by Jodi Picoult; Emily Bestler Books/Atria, 421 pp.,fiction. Lone Wolf revolves around the two “families” of biologist Luke Warren—his human family, and the wolf packs he loves. The story opens with a car crash that leaves Luke in a coma. The drama shifts to the courtroom where his teenage daughter and his estranged son fight over the son’s desire to pull the plug on dad.

Want to join the discussion?
Feel free to contribute!