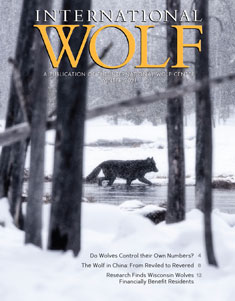 Do Wolves Control their Own Numbers?
By L. David Mech

For as long as governments in individual states have considered ways to control their wolf populations, scientists have questioned whether wolves somehow control their own numbers. It turns out, after much research, that the question is hard to answer. Renowned wolf researcher and expert L. David Mech explains the issue here.

The Wolf in China: From Reviled to Revered
By Debra Mitts-Smith

In the People’s Republic of China, the wolf is woven deep into the country’s folklore, religion, culture and even politics, appearing in different eras as an enemy, a hero, a villain or a god. This is a fascinating history and a glimpse into the future of wolves in China.  Download article.

Stories abound about economic damage done by wolves; most have to do with livestock depredation. But researchers in Wisconsin report that wolves’ control of deer populations reduces deer/vehicle collisions and saves residents more than the cost of damage done to livestock. There is disagreement, and research continues. But it’s a fascinating issue.

We’re Taking Action, and You Can Join Us
by Grant Spickelmier

This summer, as I watched the newest member of our Exhibit Pack toddling around her pen, my eyes teared up—not because Reika was so cute (though she is!), but because the smoke from a series of wildfires near Ely was wreaking havoc on my allergies. Fires in the Boundary Waters-Quetico region were especially bad this summer due to an extended, unseasonable drought—another indication that the climate here and elsewhere around the globe continues to fluctuate as the Earth heats up.

Visitors to the Center regularly ask how climate change will impact wolves and wolf populations, and I surprise people by answering, “Probably not much.”

Even for a wolf-care program that has managed wolves since 1989, introducing Rieka into the Exhibit Pack beginning August 9, 2021 presented unique challenges. In contrast to our other pup adoptions, which integrated two, three or four pup-mates, Rieka was the first single pup reared for our ambassador program.

Being reared as a single pup (often termed a singleton) meant that she was not exposed to some of the rank-order dominance typically displayed between pups before her integration. When Rieka first met 5-year-old arctic packmates Axel and Grayson, she was a bit fearful of some of their behavioral displays, which caused her to retreat, often keeping her distance from the adults. Whereas we saw Rieka display full submission to her surrogate dog, Max, prior to the integration, by late August, we still hadn’t seen full submission to the adult wolves. This may be a result of that lack of previous exposure to rank-order dominance behavior in other pups.

Few places in the world are more fascinating to wolf biologists than Isle Royale, an island about 20 miles off the shore of northern Minnesota in Lake Superior.

For more than 60 years, biologists have closely studied the predator-prey relationship between wolves and moose on the island.

So when Sarah Hoy saw a job posting with an opportunity to study wolves there, she quickly applied. Sure, she lived in Great Britain, and no, she’d never been to the United States. And she’d never studied wolves before. But she figured it was worth a shot.

Unlocking the Mysteries of Wolf Territories
by Aaron and K.C. Morris

A wolf pauses and raises her nose into the wind. She is scouting near the edge of her pack’s territory to defend the area from other wolves. While stopped, she flexes her hind leg to urinate and leaves her scent to tell other wolves to keep away. She then moves on, but she will soon scent mark again along the boundary of her pack’s territory—the space that has the resources her pack needs to survive and feed their young.

Scientists are interested in territoriality, also called territorial behavior, in wolves and other animals. They want to know if the size of an animal’s territory is mostly affected by the amount of food available or by competition with other animals. An important idea in territoriality is that there should be more advantages, or good things, about defending a territory than disadvantages, or not-so-great things. Another way to think about this is to say that holding on to their territory must not be too hard for an animal to do. Recently, Dr. Sarah N. Sells and Michael S. Mitchell, scientists with the Montana Cooperative Wildlife Research Unit at the University of Montana, conducted a study to better understand how wild animals choose their territory.

Europeans Seek Wolf Understanding and Acceptance; Japan to Uncover its Past; Canada Considers a New Path
by Tracy O’connell

A team of scientists from 10 European countries has developed a more definitive test than previously existed to determine levels of hybridization in wolves. Described in the journal BMC Genomics, it allows identification based on samples of fecal material from predators or the hair or saliva of predators found on dead prey animals. It targets locations in the genome where domestic dogs and wolves differ from each other regardless of breed and origin, eliminating “the need for similarity matches of individual genetic profiles based on reference samples of wolf and dog,” according to the recently published study.

Farmers here are expressing the oft-felt anger of rural populations over depredation of their herds and flocks by wolves. About 3,000 domestic animals—slightly more than usual—were lost in the past year to predators. One farmer lost 10 head of cattle in the previous year and another lost 90 sheep in a single night. Wolves are protected in Croatia, which is in the Balkan Peninsula of southeast Europe and bordered by the Adriatic Sea, Slovenia, Hungary and Serbia, among other nations.

Nearly half the wolf population that has emigrated here over the past four years has been illegally killed or mysteriously disappeared, according to research from Aarhus University, reported in June by The Guardian.

The article reports “just nine of 27 wolves recorded in the country were still alive at the start of 2020. Four had crossed south to Germany, one died of natural causes, one was a confirmed illegal killing and 12 have disappeared. The life expectancy for a Danish wolf is just two years.”

The Japan Times devoted a five-part series this year to an examination of whether ancient wolves still live in the mountains here. Staff writer Alex K. T. Martin set the stage for the series by noting the wolf’s history in Japan:

“Worshipped in parts of the nation as a divine messenger and protector of farmland, it appears in numerous legends and folk tales handed down for centuries in rural communities… It’s a story that brings to life a cast of colorful characters, weaving together a mix of ancient mythology and modern science against a backdrop of sweeping changes that befell this nation over the past several centuries. . .Take the young American adventurer and the German physician, both of whom find themselves in Japan playing crucial roles in the animal’s zoological history. . .Then there’s the aging mountaineer on a lifelong mission to find the missing creature, and the renegade academic on a relentless campaign to reintroduce wolves into the archipelago. . . Meanwhile, DNA researchers from around the world are collecting rare genomic data to unravel the taxonomic puzzle surrounding the mysterious beast.”

A perkily titled website, Vancouverisawesom.com, last summer suggested a “new way forward” to protect caribou without the reduction of wolves that has become an annual component of life in British Columbia. Since 2015, 1,447 wolves have been killed in the province’s culling program—more than a quarter of those in the last year. It asked, could tree blockades and “wolf moguls” offer an alternative?

Wolves in the Wild
by Taylor L. Bland

Working as a wildlife guide in Yellowstone National Park has significant rewards; I get to see and do what people all over the world only dream about seeing and doing. There are few things in this world more magical than coming face to face with a wild wolf, and for me, every day in the park is spent hoping to lay eyes on wolves.

Whether I view them up close or from afar, I always experience an adrenaline rush—and that makes it impossible to forget the really magical, unexpected moments. January 6, 2021 was a day I will remember forever.

Typically, the every-four-year event draws about 500 wolf biologists, researchers, students and enthusiasts from more than 20 countries.