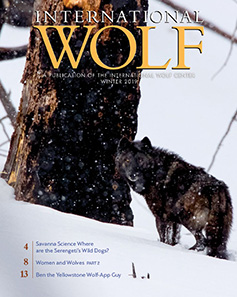 Savanna Science: Where are the Serengeti’s Wild Dogs?
By Cheryl Lyn Dybas

In 1991, African wild dogs vanished from Tanzania’s protected area. Could the biologists studying them be responsible for their disappearance? One researcher thought so. Or was it canine distemper? Or perhaps competition from other predators? The author examines the evidence and explains the conclusion scientists have reached.

Women and Wolves
By Debra Mitts-Smith

In Part 2 of her feature on female wolf biologists, the author reveals the importance of communication skills in a biologist’s role as an advocate for wildlife, and the ways her four subjects handle conflicting opinions about wolves in particular. She wraps up with biologists’ advice to young people who aspire to a career in wildlife research. Download full article.

Young people can be powerful advocates for wildlife. This is the story of 12-year-old Ben, who put his tech skills to work for wolves—and for the people who care about them. His Yellowstone Wolves and Packs app is now helping people learn about the park’s wolves and raising money for the Yellowstone Wolf Project.

A Summer of Wolves is a middle-grade novel that leads the young reader into the lives of two children and a wild wolf pup in the northern Minnesota wilderness. The story teaches well while it warms the heart. It also led the International Wolf Center to name the book’s author, Polly Carlson-Voiles, as the winner of its 2019 “Who Speaks for Wolf” award.

On August 14, 2019, former ambassador pack leader Aidan passed away after a long-term issue with mast cell tumors. Mast cells have high concentrations of histamine and heparin, with granulomas that are part of the immune and neuroimmune systems. Despite four surgeries to remove affected masses, the cells eventually migrated to Aidan’s gastro-intestinal tract, causing his death.

Head-Over-Heels for Wolves
by Chad Richardson

In her admittedly limited free time last year, Addy Maki browsed the internet in search of wolf cams. She was hoping to get a look at a live wolf from the comfort of her home in the Minneapolis suburb of North Oaks.

What are YOU looking at?

Many predators, including wolves, are carnivores—meaning they receive almost all of their nutrients from the prey animals they catch and eat—but some predators are omnivores, which means they get the nutrition they need from both animals and plants. Visit our Wildkids section.

Good News from the Netherlands, Bad News from Bangladesh, a Surprise in Siberia, Indifferent Dogs in Austria
by Tracy O’connell

AUSTRIA
Research recently completed by the Wolf Science Center in Vienna and published in the journal PLOS One suggests that wolves are more caring toward each other than are dogs.

A 32,000 to 40,000-year-old wolf head, discovered in early 2018 but reported this year, was found perfectly preserved in the permafrost by a tusk hunter seeking remains of wooly mammoths on the bank of the Tirekhtyakh River near Yakutia, above the Arctic Circle. The Siberian Times reported it was the head of an adult, two-to-four years old, and fully intact with fur, tongue, teeth, brains and tissue.

The first Indian gray wolf seen in Bangladesh in 80 years was killed by farmers in Taltoli, a remote town near the Sundarbans. The world’s biggest mangrove forest, the Sundarbans area reaches into India as well as Bangladesh, covering 539 square miles in a delta formed by the confluence of the Ganges, Brahmaputra and Meghna Rivers in the Bay of Bengal.

Banff National Park personnel are awaiting confirmation that the wolf euthanized following its August attack on a camper is the correct animal.

In the meantime, the campground where the attack took place remains closed. The victim, taken to the hospital with severe damage to his hand and arm, was in his tent with four family members when the wolf attacked, and neighboring campers came to the rescue. Park service personnel did not find any wildlife attractants in the campsite or in the larger park area.

An 11-member, state-employed cadre of youths with hunting skills and knowledge of wildlife management turns out in night-vision gear to help farmers deter or eliminate wolves preying on their flocks. The “wolf brigade” intervenes when traditional anti-wolf measures, such as dogs, fencing and additional shepherding, have failed, according to an article in many media outlets. The group, formed in 2015, also includes trained volunteers.

In the wilds of Gelderland province, wolves are officially back after a pair produced a litter in that central-eastern part of the country. An online video shows three young wolves in a forest clearing there—though officials said there could be up to five pups. They did not reveal the exact location of the discovery, as they did not want people to disturb the animals.

Watching the Wily 8-Mile Pack in Yellowstone
by Ashley Vestrand

How many people go on vacation and voluntarily wake up at 3:30 a.m.? My guess is…not many, unless they are vacationing in or around Yellowstone National Park. In that case, they may want to wake up before the animals.

My husband and I have been traveling to Yellowstone for five years. We love to see the animals in their natural habitat, and the views are indescribably gorgeous. Year after year, we have waited excitedly to see the famously elusive 8-Mile Pack of wolves. Over the years we have driven through 8-Mile territory countless times with the same tradition—and the same results. He drives as I sit on the edge of the passenger seat and scan for wolves. I see a “wolf” in the distance. My husband pulls to the side of the road. We eagerly climb out of the car, and…it’s a Sandhill crane.

New Hope for Wolves and Wildlife
To remain relevant, state fish and wildlife agencies need to change
by Walter Medwid

The bottleneck that has prevented public interests from influencing wildlife governance is created by state wildlife agencies and their politically appointed commissions. As Robinson and Parsons stated on the website Rewilding.org in October 2018, agencies and commissions are “held captive by special interests, including primarily hunting and fishing, livestock and energy interests. As a consequence, the rightful interests of the majority of citizens are often ignored…”