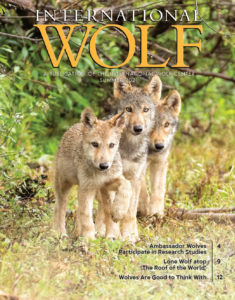 In central Asia, the genetically distinct Himalayan wolf lives on “The Roof of the World”—a place where extreme altitude, thin oxygen and remoteness make research on wild inhabitants difficult. But persistent scientists have managed to learn about the unique, high-altitude adaptations that make it possible for these wolves to thrive.

Wolves Are Good to Think With
By Debra Mitts-Smith

Look up “wolf” in a dictionary; you’ll find a lengthy explanation there, because that word and its applications have evolved over the history of language. We use it in medicine. In botany. In astronomy. In folklore and law and literature. Whether depicted as hero or villain, the wolf is vital to our environment and our language.

Last week there was much rejoicing in my family after my mother finally got her first COVID shot. After the initial relief and excitement, discussions began around how quickly our family activities could “get back to normal.” Sharing holiday meals together, hanging out inside Mom’s house (instead of garage visits) and eventually ditching the masks started to feel like real possibilities in the not-so-distant future.

As vaccines roll out, we are having similar conversations at the International Wolf Center about how much we can get back to normal. While masks and social distancing are likely to be with us for a while, we anticipate loosening restrictions, accommodating more visitors and even holding our board meetings in person again.

The International Wolf Center adopts pups during the critical bonding period called the neonate stage (12 to 14 days of age) to help them form strong bonds with handlers—some of whom provide medical care throughout their lives, while others determine the experiences that shape a pup’s behavior during the Socialization Period (21 days to 12 weeks).

Wolves tend to be “neophobic”—possessed of an overwhelming fear of new or unfamiliar things. The innate wolf response to something new or unfamiliar is “fight or flight,” and while most pups lack the experience or confidence for fight, a common response is flight. It’s up to the wolf-care team to reduce that flight impulse to zero, and the best time to accomplish this goal is during the formative stage of development, within the socialization period.

The scene that played out before Jeremy SunderRaj would probably have scared most 11-year-old boys. The fact that it didn’t might indicate that he was destined to be a wolf biologist.

About 13 years ago, SunderRaj and his family took a trip to Yellowstone National Park from his home in Denver, Colorado. He desperately wanted to see wolves, and much to his delight, he and his family got more than he bar-gained for. Not far off the road, a pack of Yellowstone’s wolves had found and killed two black bear cubs. SunderRaj was fascinated.

An iconic wolf with an international following was legally shot by a hunter last year. His habituation to humans was blamed for his lack of wariness. Named Stqéyəʔ by the native Lekwungen people of coastal British Columbia and Takaya (Japanese for “respectful one”) by a filmmaker who helped popularize him, the lone wolf for eight years delighted those who spotted him on the beaches of the uninhabited Discovery and Chatham Islands. There he could be seen by tourists on pass-ing boats, kayakers and others cross-ing the narrow expanse of water called the Salish Sea from British Columbia’s capital city of Victoria, with a population near 400,000.

Meanwhile on Canada’s east coast . . . The Canadian radio station VOCM, based in the province of Newfoundland and Labrador, reports that a recent decline in woodland caribou in Labrador is believed to be causing wolves to look to the island of Newfoundland for food. U.S. conservationist John Glowa, head of the Maine Wolf Coalition, has been watching the population for eight years since a Labrador wolf (con-firmed by genetics) was shot on the Bonavista Peninsula of Newfoundland. Since then, five Labrador wolves and 13 wolf-coyote hybrids have been con-firmed on the island through DNA tests on carcasses.

Wolves are still in the crosshairs farther north. As has been reported here in the past, the controversial wolf cull continues in the Northwest Territories. Intended to reduce predator impact on caribou herds, the plan calls for the killing of 60% to 80% of the wolves in a certain part of the province every year for the next four years. The efficacy compared to other means of protecting the caribou has been questioned by a variety of sources. Most recently Dave Olesen, a bush pilot with 35 years of ferrying wildlife researchers to study sites, was quoted by the Canadian Broadcasting Company, terming the cull “an utter waste of time, money and professional careers.”

In September of 2020, as autumn crept into the Northwoods, David Johnson and I headed up the Gunflint Trail to spend the morning calling moose and shooting photos. Winds were calm, which made for perfect moose-calling. Sounds carried into the distance, echoing across the landscape. I used my mouth to imitate the loud, slightly nasal, “rrrrrrru-uhh” sound of a love-sick cow moose. The call was amplified by a fiberglass cone handmade in Alaska. When used prop-erly, it creates a sound that’s just about irresistible to a lonely bull moose.

Wolves Are in the Northeastern U.S. — Will State and Federal Government Adequately Protect Them?
by John M. Glowa and jonathan G. Way
It started on an August day in 1993. Campers north of Maine’s Moosehead Lake were cooking over their campfire when what looked like a black wolf came out of the woods.  Less than a week later, that animal was shot by a bear hunter from Pennsylvania. It was the first DNA-documented wolf in Maine in modern times.
That wolf was the first of at least nine killed since 1993 south of the St. Lawrence River in an area stretching from Massachusetts to New Brunswick, Canada. The largest was a 107-pound male killed in agri-cultural lands just south of Quebec City in 2006.

Wolves have been viewed as a threat by settlers since the first Europeans arrived in North America. As a result, almost all of them were killed in the “lower 48” United States by the mid-1900s. But since 1974, when gray wolves became protected by the Endangered Species Act of 1973, they have successfully recolonized many areas in the U.S.  Visit our Wildkids section.