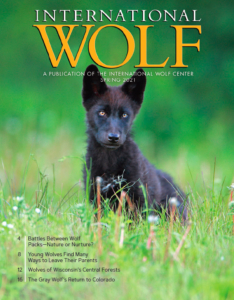 Battles Between Wolf Packs—Nature or Nurture?
By Kira Cassidy

Battles between wolf packs are common; about half of all adult wolves die during a fight. Factors already known to affect aggression levels include gender, age, pack size—even coat color. But here, the author explains what scientists learned when they examined wolf DNA to determine how much of wolf aggression can be attributed to nature, and how much to nurture. Download article.

Young wolves typically leave home at the age of two or three, striking out to find a mate and form a new pack. The behavior is called dispersal, and according to studies, it appears (crediting Simon and Garfunkel for this terrible pun) there are 50 ways to leave your mother— more or less. Tracy O’Connell describes some of them here, along with factors that may determine dispersal behavior.

In the 1980s, Dick Thiel
was doubtful that wolves in northern Wisconsin would ever move into the sandy central forests of that state. Too much civilization. Too many diseased wolves. Too many human-caused wolf deaths. But by the mid-1990s, evidence of wolves showed up there, and monitoring increased. The author here describes events that led
to survival of Canis lupus in Wisconsin’s central forests.

Twenty-five years of scientists’ efforts couldn’t convince the USFWS to restore the gray wolf to western Colorado. Finally, they took the question to the people of Colorado—and succeeded. On Nov. 3, 2020 Coloradans narrowly passed Proposition 114, allowing reintroduction and management of wolves that will assure the species’ successful existence from the High Arctic to Northern Mexico.

Who is the Ken in your life?

As I write this letter, the 2020 election season has just come to a close. (Finally!)

Like a lot of folks, I do not miss the robocalls and constant television advertising. In the run-up to November, one of the most helpful things I did was talk regularly with a friend of mine named Ken who lives in Oregon. Though we share many things in common, including a love for the outdoors and wildlife, Ken’s political views are significantly different from mine. Despite these differences, our friendship allowed us to discuss the candidates and issues respectfully and learn from each other’s viewpoints.

During one of our talks, I asked Ken his opinion on wolf issues that are being debated, including the vote to reintroduce wolves to Colorado, pro-posed delisting in the United States and others. A long-time elk hunter, Ken let me know that most of his hunting buddies out West didn’t trust anything they heard on the news about wolves. He went on to say that his friends assumed that wolf OR-7 and other pioneering wolves in Western Oregon had been transplanted there by environmental groups. I was astonished by this theory, and we went back and forth for a while about where it came from.

As most dog owners recognize, canids have unique personality traits—including wolves. One benefit of observing wolves socialized to humans is the opportunity to discover those traits and teach about wolf behavior.

From his days as a pup in the ambassador pack, Boltz was a calm, social canid who would wait and watch before trusting any situation. In fact, his facial expressions that suggested suspicion were noticed and cherished by staff and visitors—as was he. His recent medical issues were intensely engaging for wolf-care staff, who handled them with utmost care as they tried to keep Boltz’s fans and followers informed and reassured. This is a synopsis of Boltz’s last few months before his life was cut short by an undiagnosed medical condition.

In Honor of Malik, a Wolf-Cam Fan Became a Member
by Chad Richardson

While scrolling through her news feed on Facebook some eight years ago, Connie DiBratto came across a post about white wolves. The subject intrigued her, so she went to Google to search “white wolves.” Before long, she was watching wolf-cam video of two arctic wolves at the International Wolf Center.

SWITZERLAND
Voters last fall rejected by nearly 52 percent a proposal that would, in part, weaken protections for wolves, according to the online media swissinfo.ch. Voter turnout was high at nearly 60 percent, and the out-come did not split as evenly “rural-urban” as it typically does on these issues, in that some rural dwellers opposed this measure. The last hunting law dates from the 1980s, before wolves returned permanently to the country.

SPAIN
Wolves are being run over on the roads here at an escalating rate, according to pledgetimes. com, an online news source of stories from around the world. Lobo Marley, a non-profit association in support of the Iberian wolf, along with the Sustainability Observatory has identified the 50 deadliest sections of the country’s national highways, which in the last decade have seen the death of 81 wolves—a figure believed to be under-reported.

CANADA
An Air Force training exercise gone wrong created havoc in Nova Scotia last fall when residents learned of the release of gray wolves into their region—or thought they did. The exercise was intended as a course in how to identify and deal with dis-information campaigns by foreign countries. It included realistic communications which were unintentionally released to non-participants, accompanied by sounds of howling broadcast over loudspeakers, creating the scare.

ITALY
Researchers are studying heart worm, a parasitic infection transmitted by mosquitoes, which is already prevalent in wolves that have recolonized Northern Italy. Heartworm affects dogs (and more rarely cats and ferrets) worldwide, notes an article in biomedcentral.com, an online source of peer-reviewed journal articles. Foxes and golden jackals were among the wild animals found to harbor the para-site in some Southern European countries. Transmission requires a prevalence of mosquitoes, which thrive in low-lying areas. The Italian Alps, where the majority of wolves live in Italy, surround such a land form.

SCANDINAVIA
New findings have increased understanding of the genetic origin of wolves in local areas—long a controversial topic, according to miragenews.com, an Australian media outlet. It reports that researchers at Sweden’s Uppsala University analyzed genetic material from 200 wolves and published results in the journal Evolutionary Applications.

JAPAN
Robot wolves are being used to scare away black bears here. Bear attacks are at a five-year high, with 157 people attacked in 2019 and dozens more in 2020 alone; two such attacks were fatal. The city of Takikawa deployed a pair of robowolves that move, emit mechanical and animal sounds and have flashing red eyes, according to The Guardian and other media. To date, the robots have been successful in preventing further attacks.

Snowed-in tracks indicated Harry hadn’t been to his camp for several days. Dave told me he would try to land between the buildings without sliding into the river. As he dropped the plane down through the camp, our wing tips missed the buildings by inches, and despite Dave’s bush-pilot skills, he ran out of flat terrain, pulling up hard and heading skyward just before we reached the trees that lined the riverbank.

Hope for Red Wolves Through Cross-Fostering
by Cornelia Hutt

Recovering an endangered species is a painstaking, incremental process, and the ongoing effort to restore the red wolf (Canis rufus) in northeastern North Carolina is no exception. Thirty-three years have passed since the first captive-born red wolves were reintroduced to the wild at Alligator River National Wildlife Refuge in a pioneering attempt to save the species from extinction. Thanks to several innovative techniques developed by field biologists in the U.S. Fish and Wildlife Service (USFWS) Red Wolf Recovery Program, red wolf numbers grew steadily until increased gunshot mortalities and other factors caused numbers to plummet.

High on my bucket list had always been the chance to participate in cross-fostering a captive-born pup into a wild-born litter. When Red Wolf Recovery Program field biologist Chris Lucash agreed to let me join the crew when they looked for a den, I was so excited I could hardly sleep the night before. I was ready at 7 a.m. sharp, dressed in boots, long pants and a long-sleeved shirt, and equipped with plenty of bug spray.

How Much Room Does a Wolf Pack Need?

Wolf packs live in territories. A territory is the wild space a pack needs to find resources like food, water and shelter. The size of a pack’s territory can vary a lot depending on prey density, or how much food wolves can find in that area. Just as you’d prefer a snack sitting next to you rather than having to travel all the way to the kitchen for it, wolves don’t want to waste unnecessary energy when finding food, so they use only the space they need.  Visit our Wildkids section.