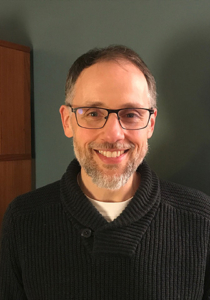 Executive Director Grant Spickelmier shares his thoughts on a year unlike any we’ve seen before. While the year included countless challenges, he’s counting his blessings.

Board of Directors Chair Nancy jo Tubbs tells the story of a staff and Board of Directors that weathered 2020 while planning an upcoming symposium and making room for a new pup in the pack. “We’re ready for the brilliant new normal.” 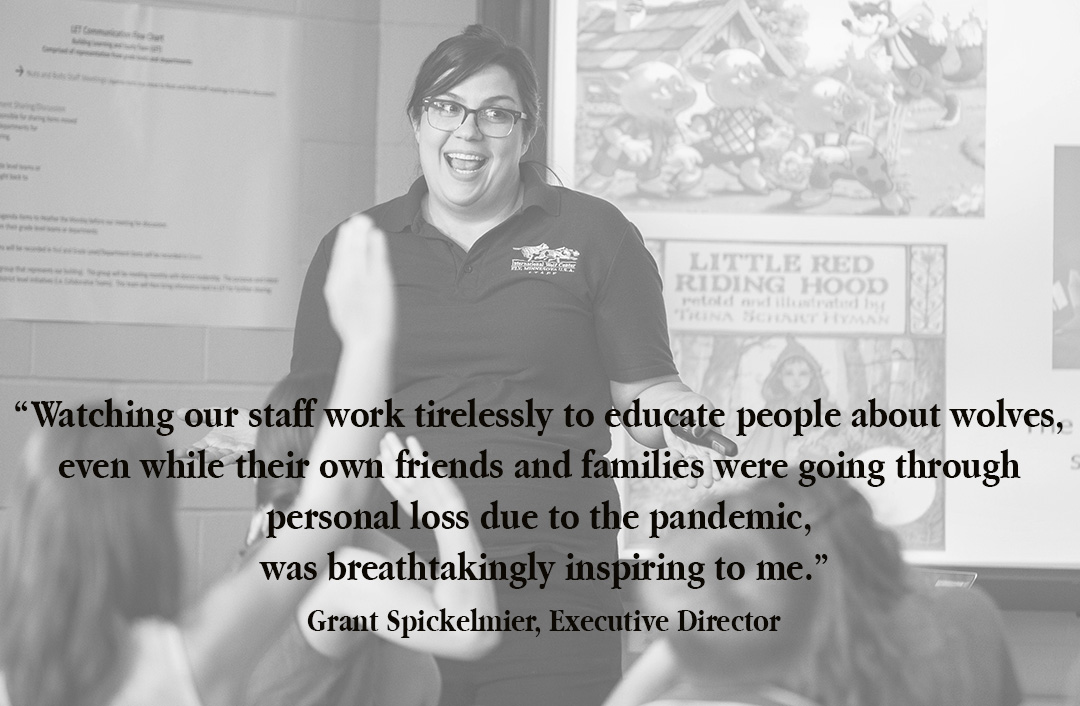 As Covid-19 impacted our Visitor Center, resulting in two separate complete in-person closures, the International Wolf Center increased its online presence through a variety of WolfLink virtual field trip and webinar opportunities.  The education team led WolfLink virtual field trips for approximately 6,000 students countrywide in 2020. Nearly all these students were able to connect live to our programs with our education team as well as their classmates from their individual homes. They learned about wolf biology and observed natural wolf behavior through our live webcams.

Nearly 1,500 people attended our weekly program, What’s for Dinner?  They learned about the hunting and feeding behavior of wolves while having the opportunity to observe our Exhibit Pack and ask our education team questions.  While Covid-19 resulted in the International Wolf Center closing its doors to in-person visitors at various times throughout 2020, the Center held occasional virtual What’s for Dinner? programs to stay connected with our audiences.

More visitors than ever before came to the Center’s website at wolf.org. Our online educational material was viewed by 667,000 unique visitors.

2020 also included a brand new partnership with explore.org, where the Center’s ambassador wolves are now featured on two live webcams. These cams are staffed by volunteer camera operators and provide a unique look at real wolf behaviors.

New content is drawing new visitors to our website at wolf.org. In 2020, that content included myth busting posts, including one about a viral photo of a wolfpack traveling through snow that is inaccurate. There were also a number of new articles about wolf science, including posts about why the term “alpha wolf” is misleading and what went into the decision to remove gray wolves from the Endangered Species Act.

Audiences all over the world are able to access current, science-based information through our educational programming about wolves and wildlands.

Caption attached to photo of wolves traveling through snow is false

What went into the decision to delist gray wolves from the Endangered Species Act? 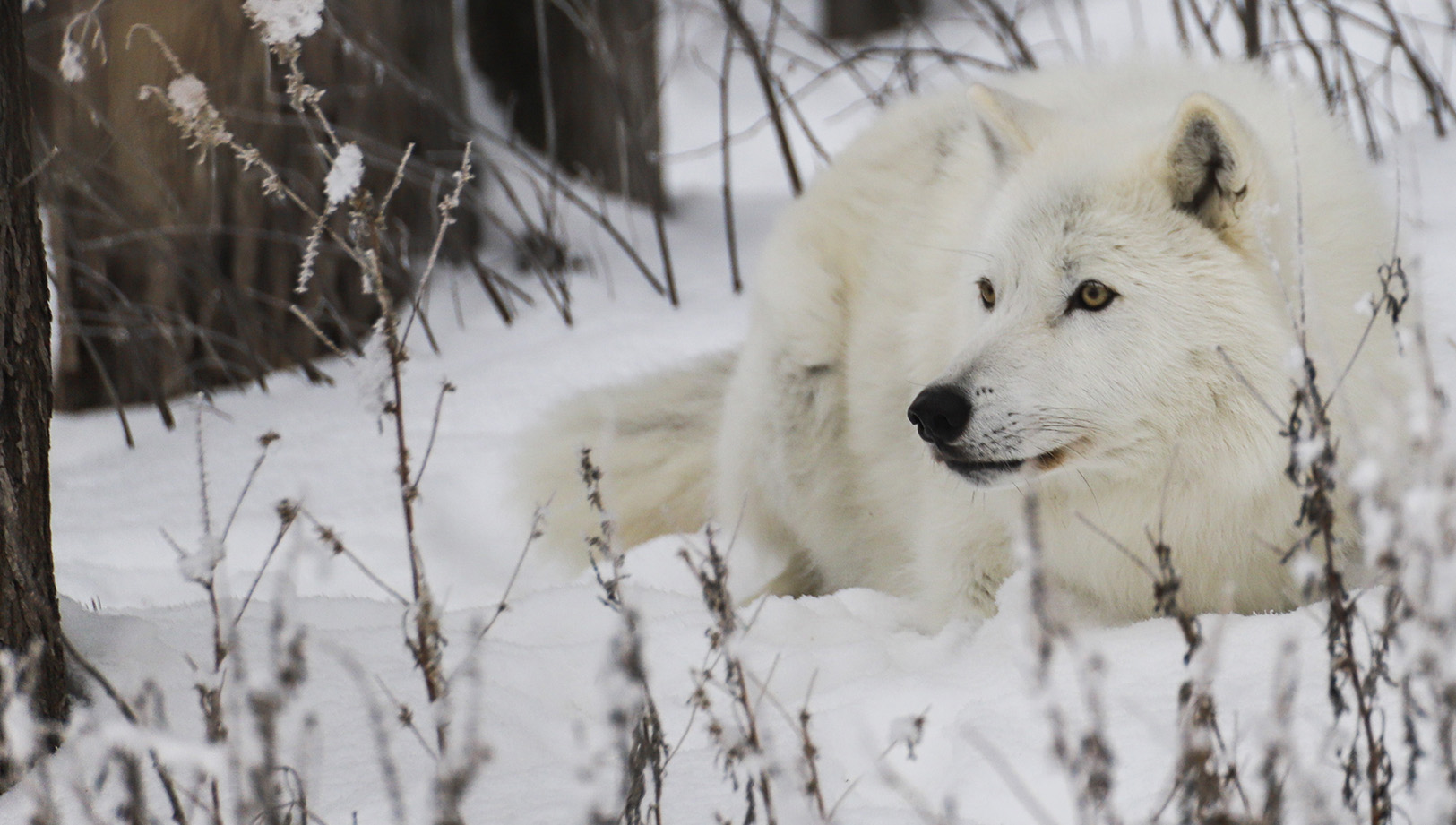 It was a challenging year with the International Wolf Center’s closure due to COVID impacting the planned adoption of pups from the Wildlife Science Center. Along with deferring adding pups until 2021, we also witnessed a decline of our Exhibit Pack due to illness and age ending up with only two wolves by October 2020.

The decline in numbers in our Exhibit Pack started with Boltz, our Great Plains Subspecies wolf, being retired for medical reasons in September. Staff had observed some hind quarter instability during a feeding program in late August. By mid-September, we saw no improvements in Boltz’s condition, and the decision was made to retire him and start the process of more complex diagnostic work.  Boltz was given excellent care including receiving an MRI at Ely-Bloomenson Community Hospital in Ely. Radiologists at the University of Minnesota reviewed those files, as did Dr. Kristine Woerheide from the Ely Veterinary Clinic. Unfortunately, the MRI did not lead to a conclusive diagnosis of Boltz’s condition. His condition declined until we made the difficult decision to euthanize him on Thursday, Nov. 12.

With Boltz’s removal from the Exhibit Pack, long-time pack member Denali was co-existing with his younger packmates, Axel and Grayson. But without the buffer of Boltz to deflect some of their youthful exuberance and dominance, Denali became a focal point, especially for Grayson, who had a history of food competition with Denali.  This focus proved to be too much for a 12 ½ year old wolf.  On October 16, one month after Boltz was retired, Denali moved to the East Side Retirement area.  He was the oldest wolf we had managed in the Exhibit Pack.

Speaking of older wolves, Grizzer continued to show his tenacity and resilience this year, not only adapting to Boltz’s increased medical needs, but reuniting with Denali so they could share space.  As the winter of 2020 arrived, Grizzer welcomed the pattern of spending morning breakfast time inside the warmth of the Wolf Care Center.

Thanks to the many supporters who made these improvements to our Wolf Care facilities possible. We are eternally grateful to John and Donna Virr for all of their support over the years to make retirement and medical facilities at the Center a reality.

Boltz, ambassador wolf at the International Wolf Center, euthanized due to failing health

Your generosity made an incredible difference at the International Wolf Center in 2020. As our financials show, the closure of our interpretive center in Ely, Minnesota, was a big blow to the organization. We closed for April, May and much of June, then had to close again in December. Even though our admissions revenue was down, donors and members like you stepped in and more than made up the difference!

Our financials illustrate that bright spot clearly.  With your help and that of our Board of Directors, we raised more than $100,000 during our biggest one-day fundraiser, Give to the Wolves Day, in November. We were so encouraged by members and donors who have supported us for decades to brand new donors who stepped forward. There’s just no way we would have made it through 2020 without your support. 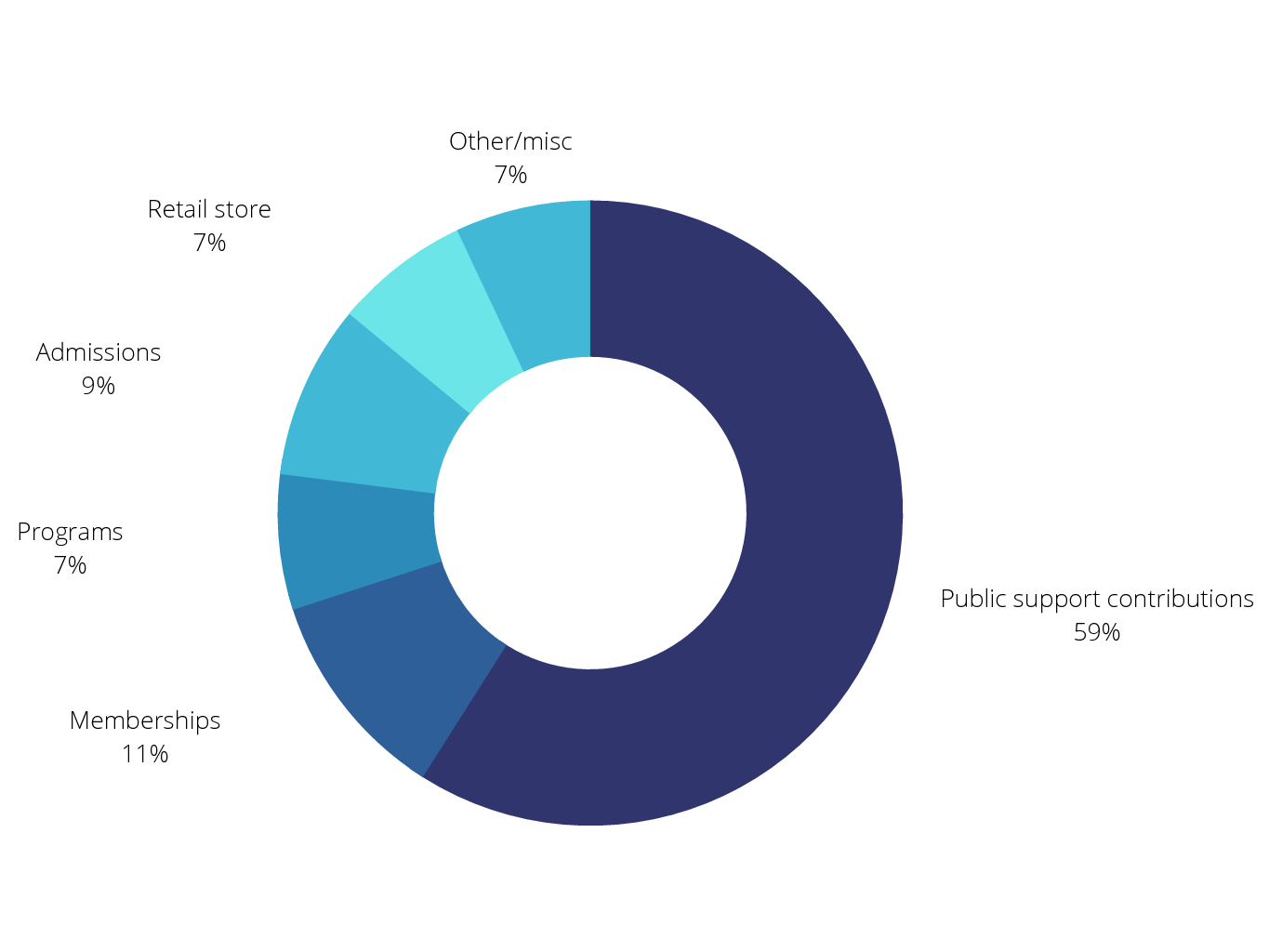