At first, Cassi Camara ignored the call of the wild.

While she was essentially destined to work with wolves after trailing her grandfather around while he worked to reintroduce red wolves, she set off on a much different path at first. Camara attended college and earned a Bachelor’s degree in, of all things, eastern European studies. 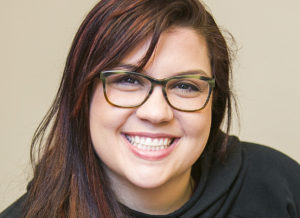 She said she doubted herself and doubted her intelligence. Following in her grandfather’s footsteps seemed too daunting a task.

That’s when the accident happened.

Camara was injured in a car crash and suffered a traumatic brain injury.

Determined to not let that injury define her, Camara decided to go back to school.

“I wanted to prove I was smart,” she said.

She enrolled at Colorado State University and soon graduated with a Master’s degree in zoo, aquarium and animal shelter management.

Camara got to work with the degree, managing a herd of whitetail and muntjac deer in Fort Collins, Colorado, at CSU. She also spent time working with the Rocky Mountain Wolf Project. Just a few months ago, she saw a post for a wolf educator at the International Wolf Center in Minnesota. The job seemed a perfect fit. She’d travel to classrooms and educate students through a unique program called Wolves At Our Door. Camara was one of dozens who applied and she ultimately earned the position. She started in October.

Camara grew up idolizing her grandfather, George Garris, who worked for the United States Fish and Wildlife Service. One of his projects was the red wolf reintroduction program.

“I thought my grandfather was the coolest guy in the world,” she said.

Often times during her summer breaks, Camara would tag along while he tracked red wolves.

“When you are 7 years old and you see a red wolf, it sticks with you,” she said.

Camara’s interest in wolves stems, in large part, from the controversy surrounding them. The Center doesn’t take sides on those controversial issues, but aims to spread science-based information so that when people go to make up their own minds they are armed with facts instead of myths.

“Those issues need someone in the middle,” Camara said. “That’s why the education and outreach is so important to me.”

Now, Camara is ready to take her act on the road. Thanks in part to a grant from the Minnesota Environment and Natural Resources Trust Fund, Wolves At Our Door is offered free to public schools across Minnesota.

The classroom program can be tailored for students in grades 2-12 and typically lasts about 60 minutes. For more information on the program, or to register your classroom for a free visit, go to: https://wolf.org/programs/wolves-at-our-door/.

Camara can be reached directly by writing to cassi@wolf.org.