What is surplus killing? And do wolves kill for sport? This post answers those questions

You are here: Home1 / Wolf Info2 / Wolf News3 / Headlines4 / What is surplus killing? And do wolves kill for sport? This post answers...

What is surplus killing, and why do wolves do it?

This post on surplus killing aims to set the record straight on this often misunderstood phenomenon.

We thank all of the biologists whose work has shed important light on this behavior. 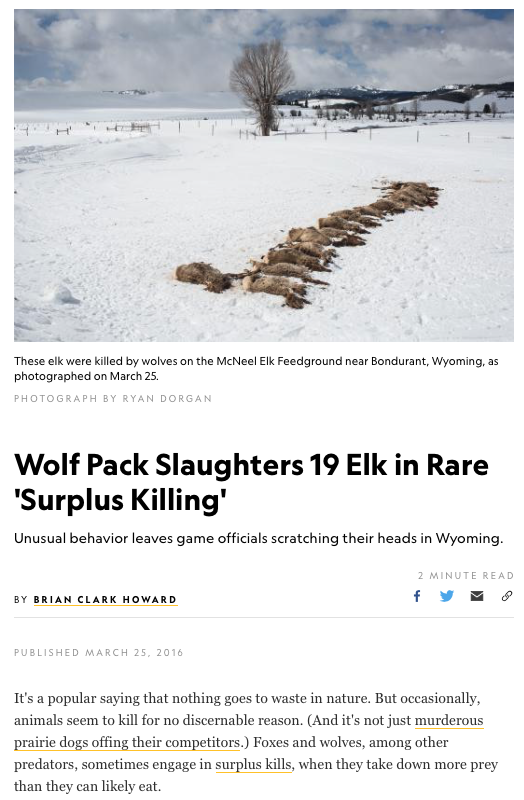 A screenshot of a National Geographic post from March 25, 2016

The National Geographic headline in 2016 was a sensational one: “Wolf pack slaughters 19 elk in rare ‘surplus killing.'” A photo showed 19 elk that had been killed, and not eaten, by a pack of wolves in Wyoming.

Events like these often paint wolves as bloodthirsty animals that are interested in killing for sport. Science, though, shows that wolves do not merely kill for sport.

Do they kill more food than they can eat at the time? Yes, that does happen. However, it does not happen frequently.

When does it happen and why? We aim to answer those questions with this post.

A great resource for this phenomenon is the book “Wolves,” published in 2003 by Dr. L. David Mech and Dr. Luigi Boitani. (For transparency’s sake, Dr. Mech founded the International Wolf Center and serves on its board of directors.)

In the book, Dr. Mech wrote that “it is rare for wolves to kill wild prey in surplus. All cases of surplus killing of wild prey reported for wolves have occurred during a few weeks in late winter or spring when snow was unusually deep. In 30 years of wolf-deer study, Mech observed this phenomenon only twice, and in forty winters of wolf-moose studies, it was seen in only three winters (Peterson and Allen, 1974; R.O. Peterson, unpublished data).”

Mech attempted to explain the behavior by writing this:

“Presumably what happens when wolves kill more than they can immediately eat is that they respond normally to a situation that is drastically different than usual – prey are highly vulnerable, rather than being especially hard to catch. Programmed to kill whenever possible because it is rarely possible to kill, wolves automatically take advantage of an unusual opportunity.”

What research shows is that when wolves do kill more wild prey than they can eat, they do return to those kill sites later.

Mech wrote: “It stands to reason that if scavengers did not consume these carcasses, eventually the wolves would return to them when prey was harder to kill, just as they do caches or carrion. In fact, a follow-up study supports that notion. In Denali National Park, six wolves killed at least seventeen caribou about 7 February 1991, and of course could not eat them all. By 12 February, however, 30 to 95 percent of each carcass had been eaten or cached (Mech et al. 1998); by 16 April, wolves had dug up several of the carcasses and fed on them again.”

Surplus killing of animals with natural defenses is rare.

It’s not as uncommon, though, for there to be surplus killing of domestic animals that lack those normal defenses against wolf predation.

This paper, published in 1976, details the surplus killing of reindeer in Sweden by wolves. In this case, two wolves killed 40 reindeer in two weeks, including eight in one night. On that night, Dec. 2, 1973, there was heavy snowfall that hindered any chances for escape.

“Most of the reindeer were attacked without any chases; as far as could be judge from the tracks they had been killed without showing any tendency to escape.”

In another instance, wolves killed 70 sheep on a farm north of McCall, Idaho, in one night. That pack of nine wolves was then killed by federal wildlife agents, according to this story. In this story, the head of the Western Watersheds Project in Hailey, Idaho, said the sheep were “bonbons” for wolves.

What the experts say

Yellowstone National Park biologist Dr. Doug Smith recorded this Q&A recently and addressed whether or not wolves kill for sport.

To learn more about surplus killing, consider these research papers: